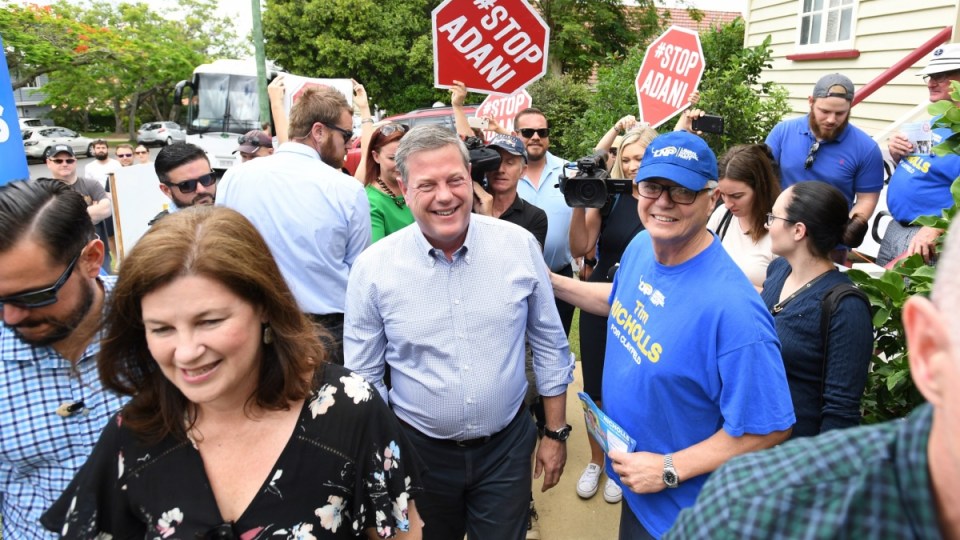 Queensland Opposition Leader Tim Nicholls has been swamped by anti-Adani protesters as he arrived at an inner Brisbane church to cast his state election vote.

Mr Nicholls and his wife Mary were heckled by chanting ‘Stop Adani’ protesters as they stopped outside the St John’s Anglican Church in Hendra on Saturday, where the Liberal National Party leader took a final dig at Premier Annastacia Palaszczuk.

Sky News reported there were “chaotic scenes” as the LNP leader was ambushed about 10.30am, with protesters shouting and waving signs reading “Coral not coal”.

He was expected to visit polling booths across Brisbane up until voting closes at 6pm on Saturday.

Mr Nicholls wasn’t the only one copping it at Queensland polling booths.

A One Nation volunteer was allegedly spat on and sworn at while handing out how-to-vote cards at a polling booth in Brisbane’s north.

“It is absolutely vile and disgusting behaviour,” Mr Ashby said.

Queensland Police confirmed they were aware of the incident, but said no official complaint has been made as of Saturday afternoon.

Earlier, Senator Hanson refused to speculate on the number of seats her party will win at the Queensland state election. Speaking outside a polling booth in the Sunshine Coast seat of Buderim, she voiced confidence her party would poll well.

“We’re going to win quite a few seats here in Queensland and I think that’s going to carry across to the next federal election too,” she said.

That confidence was in marked contrast to One Nation state leader Steve Dickson, an  LNP defector under pressure to win his Buderim seat, who admitted  he wasn’t banking on a positive result.

“I have never, ever gone into an election campaign confident, not once,” he said on Friday. Mr Dickson said changes to electoral boundaries had complicated voting.

Meanwhile, Ms Palaszczuk started her today on the Gold Coast before returning to her southwest Brisbane electorate to cast her vote at Inala State School at 11.20am.

The premier repeated her mantra that voters have a “clear choice” box between her government or the Liberal Nation Party with One Nation support.

The Inala MP also urged LNP voters uncomfortable with One Nation to vote for her just one time to avoid “cuts and chaos”.

It could be days before a final result is delivered, with counting of booths and pre-polls to be get underway on Saturday while the hundreds of thousands of postal and absentee vote calculations begin on Sunday.

It took more than a week before Labor could claim power in 2015 after the LNP was resoundingly dumped after a single term.

This time, the resurgence of One Nation and return of compulsory preferential voting will further complicate Labor and the LNP’s chances of winning a majority government.

Ms Palaszczuk and Mr Nicholls are both in for a tough fight, with Labor claiming a narrow lead over the LNP in the latest polling.

And Katter’s Australian Party state leader Robbie Katter said he was excited about the impending result.

“There are a lot of Queenslanders in rural and regional areas pretty excited about us having some real power in parliament.

“I think we’ve got a reasonable chance in any of the 10 seats we’re running in,” he said.