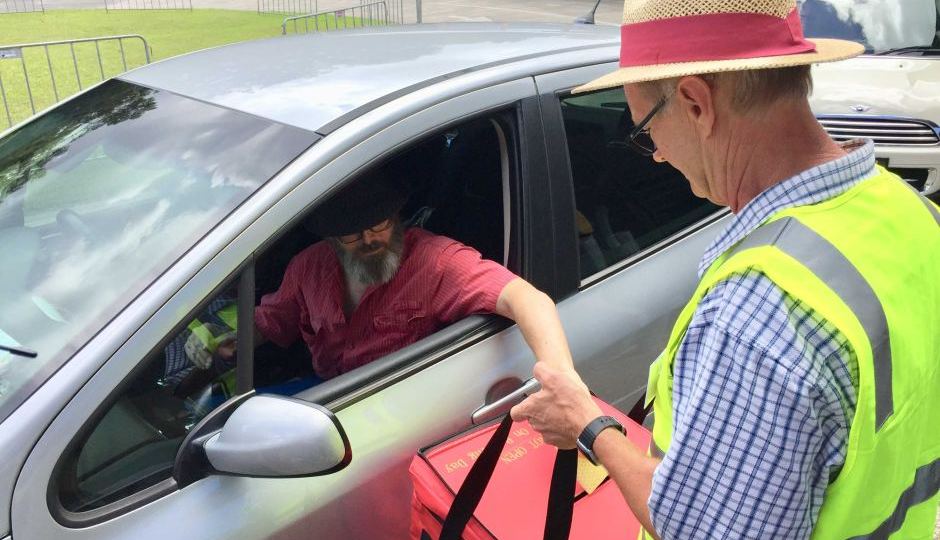 David Meddows casts his vote at Noosa from the comfort of the front seat. Photo: ABC

Queensland’s first drive-through polling booths have opened, but don’t expect “fries with that” or even a sausage sizzle at the other end.

The Electoral Commission of Queensland (ECQ) is trialling the booths in Brisbane’s bayside and on the Sunshine Coast.

ECQ elections director Wade Lewis said the novel concept took into account the state’s ageing population and was designed to make voting more accessible for those with mobility issues, the elderly and their carers.

“We know there’s a lot of excitement about the idea of these booths certainly amongst the disability support groups we’ve talked to about it,” he said.

“We’ve had people asking if they’d like fries with that or an upsize to their vote but we’re not going to try that this time around, maybe next time.”

Voters in the electorates of Noosa and Oodgeroo who attended the drive-through booths on Monday welcomed the initiative.

At Noosa, nearby retirement villages brought busloads of residents on opening day.

Voter David Meddows broke his leg three weeks ago and hoped to secure a disabled park but was pleasantly surprised by the drive-through concept.

“I didn’t hear about it, we just drove in and saw it,” he said, adding that it would have been very tedious to get out of the car to vote.

Bill Schutt uses a wheelie walker after back surgery last year but wanted to attend the polling booth.

“I find it very hard to stand up for very long … especially in places where a lot of people retire, I think it would be a very good idea,” he said.

At Cleveland on Brisbane’s bayside, the praise continued.

One woman took her disabled mother through the new setup.

“Mum has wheelchair parking and it’s a hassle to get her anywhere and me — I have a broken ankle,” she said.

Drive-through voting could be expanded

Mr Lewis said the ECQ observed drive-through voting in Western Australia before introducing it in Queensland.

The sites for the trial, the Cleveland Baptist Church in the Oodgeroo electorate and the Tewantin TAFE campus in the seat of Noosa, were specifically chosen by the ECQ as safe locations for staff, voters and traffic.

“In each facility, it’s a one-lane-in and people pull up in their car, a polling official then comes over to their car and marks the elector off the roll, issues the person with a ballot paper,” Mr Lewis said.

“They’ll step away of course and give the person some privacy to cast their vote while they’re sitting there in their car and they’ll then bring a ballot box back over and the person can drop their ballot in the ballot box and drive away.”

He said it was likely party workers would still be at the sites handing out how-to-vote cards, however access would be more difficult.

Mr Lewis said the trial would be evaluated after the election and depending on the results, it could be rolled out more widely at the next state election.

The booths will be open this week and until 6pm on election day on November 25.