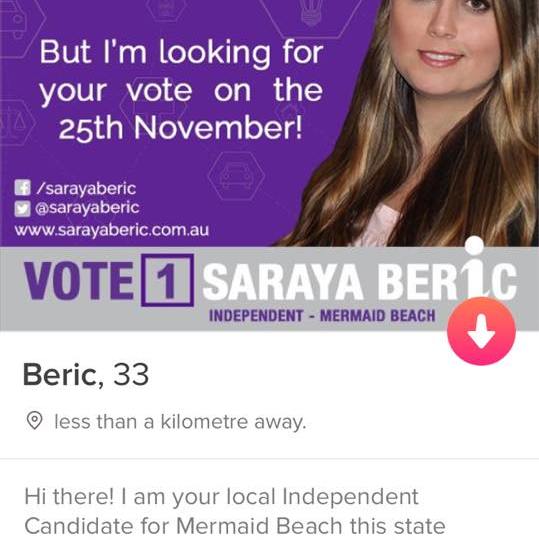 Pauline Hanson’s former assistant has defended using the dating app Tinder to drum up votes in her bid to become an independent member of the Queensland parliament.

Saraya Beric – who cut ties with One Nation after a bitter dispute with Senator Hanson – says she turned to Tinder because she doesn’t have the cash to splash on her campaign for the Gold Coast electorate of Mermaid Beach.

“I don’t have the big funds that the political parties have and so I’ve used social media and now dating app Tinder to help get my message out,” the 33-year-old has posted on Facebook.

Screenshots of Ms Beric’s Tinder posts show her appealing for votes and joking that if she fails she might end up on the Ten network dating show, The Bachelorette.

She says Tinder users seem to be responding to her unconventional approach.

“As you can see, I had fun making these pictures. I’ve got a few ‘yes swipes’ too and even a Super Like,” she wrote on Facebook.

Ms Beric has spoken publicly about her disillusionment with Senator Hanson since leaving her job and resigning as national and Queensland secretary of One Nation in October last year.

In May this year, Ms Beric denied making damaging leaks to the media about One Nation.