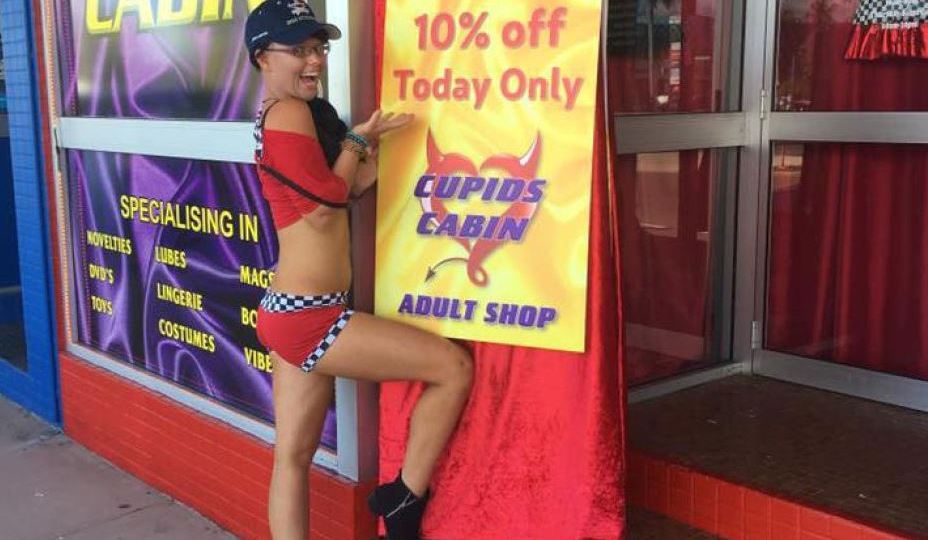 Pauline Hanson is standing by a One Nation candidate who has been revealed as the owner of a Townsville sex shop whose Facebook makes light of domestic violence.

Senator Hanson was with her party’s candidate for the seat of Thuringowa, Mark Thornton, when he confirmed at a press conference he owns adult store Cupids Cabin.

The business’s Facebook page, which Mr Thornton said is managed by his wife, posted in January, 2016: “Good sex should be in the gray (sic) area between ‘tickle fight’ and domestic violence”.

When questioned about his business and the posts by a reporter on Friday, Mr Thornton said he was not aware of that specific message.

“I haven’t seen that one, mate, but it probably comes back to your 50 Shades of Grey-type,” he said on Friday.

Senator Hanson’s chief-of-staff, James Ashby, confirmed the party was aware Mr Thornton owned the adult store as well as a flooring business, which was his Monday to Friday job.

Senator Hanson told the press conference she would not be making any rash decisions, subsequently adding that Mr Thornton would remain her party’s candidate.

“I had a talk with him, he runs a legitimate registered business, his partner runs it actually,” Senator Hanson said.

“I’m not backing down from this and I’m not disendorsing Mark.”

Mr Thornton said he was also not aware of a post from September 6 this year stating “I’m selling bra’s inbox a pic of your titties so I could see if I got your size” (sic).

“That could been from a staff member, I haven’t actually seen the site for quite a while,” he said.

“It’s my business but I don’t manage it. It’s a retail shop.”