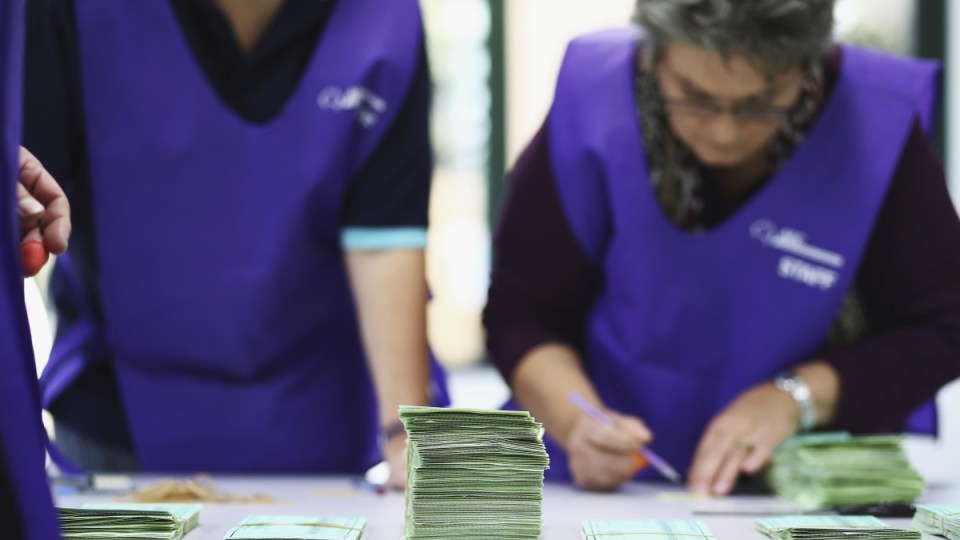 Labor appears on the cusp of securing majority government as vote counting resumes in key marginal seats, more than a week after the federal election.

Labor is currently on 75 seats in the House of Representatives, according to the Australian Electoral Commission – one short of the 76 it needs to govern in its own right.

Large numbers of absentee and declaration votes were expected to be counted on Monday.

Three seats remain in doubt – the NSW electorate of Gilmore, and the Victorian seats of Deakin and Macnamara.

In Gilmore on the NSW south coast, Labor incumbent Fiona Phillips was ahead by 142 votes as of 1pm on Monday.

Until Monday, Liberal candidate Andrew Constance had maintained a narrow lead, but that changed with the counting of absentee votes on Monday.

In the Melbourne seat of Deakin, Liberal Michael Sukkar had marginally increased his lead to 891 votes over Labor’s Matt Gregg.

The Melbourne seat of Macnamara is also another tight contest, with a three-horse race still under way between Labor, the Liberals and the Greens.

As of Monday, Liberal candidate Colleen Harkin was on 33.56 per cent, with Labor’s Josh Burns (the sitting MP) on 33.5 per cent and Steph Hodgins-May from the Greens on 32.93 per cent.

ABC election analyst Antony Green said the large number of declaration votes being counted on Monday should clarify the final result in marginal seats, unless the contests remained too close to call.

It came as both the Liberal and National parties met in Canberra on Monday to elect their new leaders.

Former defence minister Peter Dutton was elected unopposed as the next Liberal leader, and Opposition Leader. Sussan Ley was also unopposed in being elected as the party’s deputy.

After a marathon party meeting, the Nationals turned against Barnaby Joyce, instead selecting David Littleproud as their next leader. NSW senator Perin Davey is deputy leader.

Elsewhere, the Labor caucus will meet on Tuesday to determine the make up of Prime Minister Anthony Albanese’s new cabinet.

The new front bench will be formally sworn in on Wednesday.

Elsewhere, the head of Australia’s largest philanthropic trust, Professor Glyn Davis, was named as the new head of the Department of Prime Minister and Cabinet on Monday.

Professor Davis’ career spans both the public service and academic, serving as the director-general of the Queensland Department of Premier and Cabinet from 1998 to 2002, and then becoming the vice chancellor of Griffith University and the University of Melbourne.

He has also chaired the Group of Eight, Universities Australia and Universitas 21.

The governor-general made the appointment on Mr Albanese’s recommendation.

“Professor Davis will bring to the role of secretary a deep understanding of public policy and will work with my government in bringing about positive change for the Australian people,” Mr Albanese said.

Professor Davis takes over from Phil Gaetjens, who was former PM Scott Morrison’s chief of staff before moving into the role in 2019.

The five-year appointment begins on June 6.