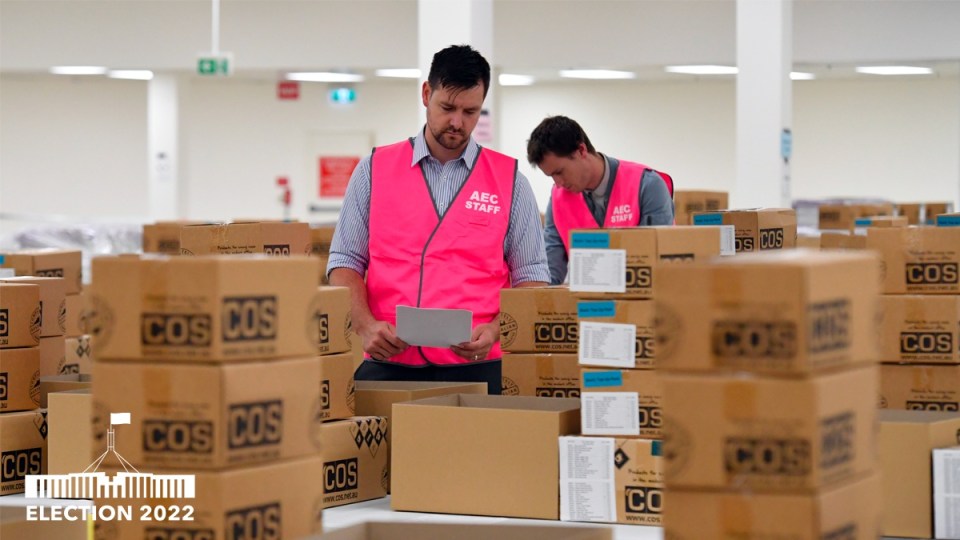 With millions of ballots counted and preferences distributed, the election result hangs on a relative handful of votes. Photo: AAP

The long wait to learn if the Albanese government has the lower house numbers to govern without the support of independents could end as early as Monday.

There was no fresh counting in the three seats that remain in doubt after the election just over a week ago, according to respected ABC election analyst Anthony Green.

“Staff will be processing declaration envelopes to be ready for a big count on Monday. That should clarify the final result – unless the three seats remain ultra-close,” he tweeted on Sunday.

Labor needs 76 seats to gain a majority in the lower house of federal parliament, but has been stalled for days on 75, according to the Australian Electoral Commission website.

“Having a majority Labor government I think is important in terms of sending a message, but I’m very clear as well that I want to treat the parliament with respect,” Mr Albanese told Sky News’ Sunday Agenda program.

The AEC considers three seats as tight – Deakin in Victoria, Lyons in Tasmania and Gilmore in NSW.

Liberal MP Michael Sukkar is 655 votes ahead of Labor’s candidate Matt Gregg in Victoria’s Deakin electorate, which has recorded a swing to Labor of roughly four per cent.

Labor incumbent for Lyons, Brian Mitchell, is ahead by 678 votes against the Liberals’ Susie Bower.

A fourth seat is also seen as tight by some pundits – the Victorian seat of Macnamara, where Labor MP Josh Burns has taken a slight lead over  Greens rival Steph Hodgins-May, with Liberal candidate Colleen Harkin trailing.

Even with Labor’s final count in Parliament House uncertain, the party will hold a caucus meeting on Tuesday, when factions can sort out their picks and preferences for the new ministry, to be sworn in on Wednesday.

Peter Dutton and Sussan Ley are on Monday expected to be endorsed as the new leadership of the Liberal Party.

The Nationals will also meet to vote on a leader with both David Littleproud and Darren Chester set to contest against former deputy prime minister Barnaby Joyce.