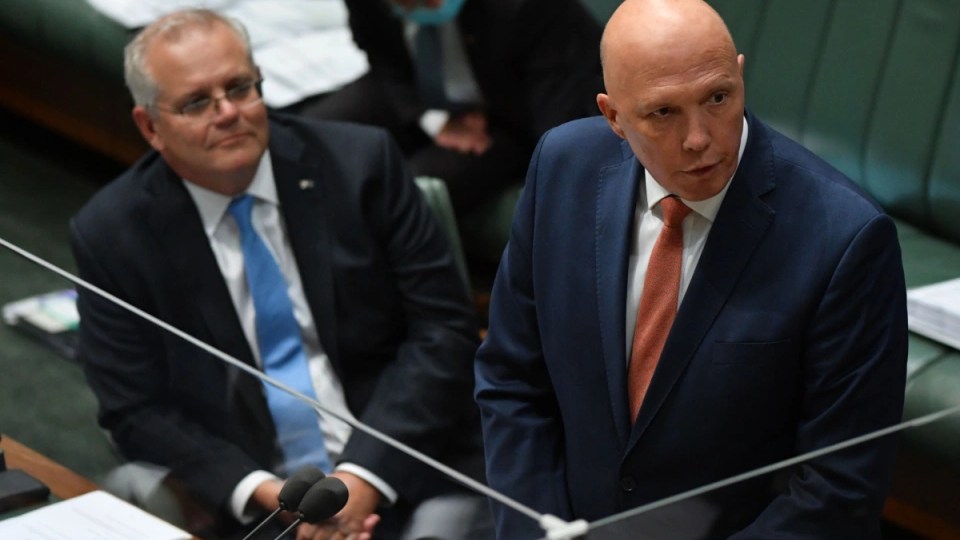 A week after Australia unceremoniously tossed the Coalition onto the opposition benches, an alternative vision for the party has emerged on the Liberal-National TV channel of choice, Sky News.

Moderates such as NSW Treasurer Matt Kean and Senator Andrew Bragg – a “fool” in the view of host Andrew Bolt – are now nightly targets for derision as a stream of conservative leaders and party apparatchiks appear on the channel for polling post-mortems.

In the world curated by these Fox-News inspired talk shows, last week’s election drubbing (the worst result for the Liberals in 70 years) wasn’t a sign that the Coalition must finally get serious about climate policies.

Rather, despite being thrown out of every seat with a view of Sydney Harbour, conservatives like Mr Bolt, Peta Credlin and Paul Murray argue the Coalition must actually swing to the right and chase regional voters.

It’s a challenge to incoming Liberal leader Peter Dutton, who wants to reignite the “broad church” philosophy killed off in multiple leadership spills under the old government, despite Sky regulars such as Nationals Senator Matt Canavan and Liberal Alex Antic trying to scrap net zero.

The voters are to blame

Such a move, which Nationals Leader Barnaby Joyce says is up for debate in the next Coalition agreement, would seemingly ignore the fast-growing climate vote across the national electorate.

But disdain for these voters in seats like Wentworth, Northern Sydney and Kooyong – where not even Treasurer Josh Frydenberg was spared – has been persistent on Sky After Dark all week.

Those who turned to independents were called “socially smug doctors’ wives” in a breakdown of conservative commentator Lillian Andrews’ election analysis on Peta Credlin’s Tuesday show.

The “smug” vote, viewers were told, didn’t turn on the Coalition over climate or integrity; these issues were merely “excuses” to punish Scott Morrison for speaking about helping poor people, Ms Credlin suggested.

Former deputy prime minister John Anderson was perhaps most direct, calling the voters “post-material” and urging the Liberal Party not to fall out of touch with “ordinary Australians”.

“They are wealthy to the point where a doubling or tripling of the household power bill doesn’t matter so much,” he opined on Tuesday.

The voter-blaming turned into conspiracy mongering on Mr Bolt’s Fox-inspired monologue less than an hour later, when he suggested places with large Chinese-Australian communities voted against Mr Morrison because he was too tough on the communist government in Beijing.

This voter vilification hasn’t helped the few moderate Liberals who kept their seats last weekend, with the downsized group of parliamentary centrists largely avoiding appearances on Sky After Dark this week.

Several didn’t respond to requests for comment about the direction of the Coalition in opposition, but they face a tough fight to win back support in once blue-ribbon heartland, foremostly against conservative colleagues who are trying to undermine the party’s climate policies.

These members have had ample time on Sky to argue their views, with Liberal Senator Alex Antic telling Rowan Dean’s Outsiders that moderates tried and failed to “appease the climate crowd” on the election hustings.

“We are not the party of capitulation to net zero,” he said. “The Liberal Party’s experiment with the poison of leftism and progressivism is over.”

But the votes last Saturday suggest there’s no path to victory in teal seats for parties that aren’t serious about climate, as ousted Liberal MP Dave Sharma, one of few moderates to appear on Sky, said.

“People didn’t think we were fair dinkum,” he told Chris Kenny this week.

“People didn’t believe we were sincere about wanting to address climate change.

“They got the sense we were talking out both sides of our mouths.”

But conservatives are all too happy to jettison these voters to the teals, preferring the party to chase a cavalcade of voters in regional areas.

These are the same electorates where the likes of One Nation and the United Australia Party have tried to mobilise voters against everything from net zero by 2050 to COVID-19 vaccines.

“There were about 200,000 odd votes that were lost to the teals, but there was almost 750,000 lost to One Nation, lost to the Lib Dems, lost to Palmer,” Ms Credlin said on her Wednesday night talk show.

“Those are the seats that make or break government, not necessarily the inner city.”

This conservative push to re-imagine the Coalition ahead of the 2025 election was even dubbed a “resistance” against Labor by Paul Murray, who occupies the latest slot on Sky After Dark’s weeknight agenda.

Mr Murray, who disparagingly calls new independents “Tiffany Teals”, wants Mr Dutton to block Labor climate action in the Senate, arguing the Liberals and Nationals have a “mandate” to do so.

However, Mr Dutton, who has repeatedly appeared on Mr Murray’s show over the years, is now trying to unite the Coalition’s warring views about the future of the party.

It’s a tough challenge. With a new Coalition agreement yet to be signed and just three years to build a new consensus, retaining net zero risks criticism from Sky regular conservatives like Mr Antic and Mr Canavan.

Nationals MPs who oppose climate action are now empowered after the party managed to emerge from the election without losing a single seat.