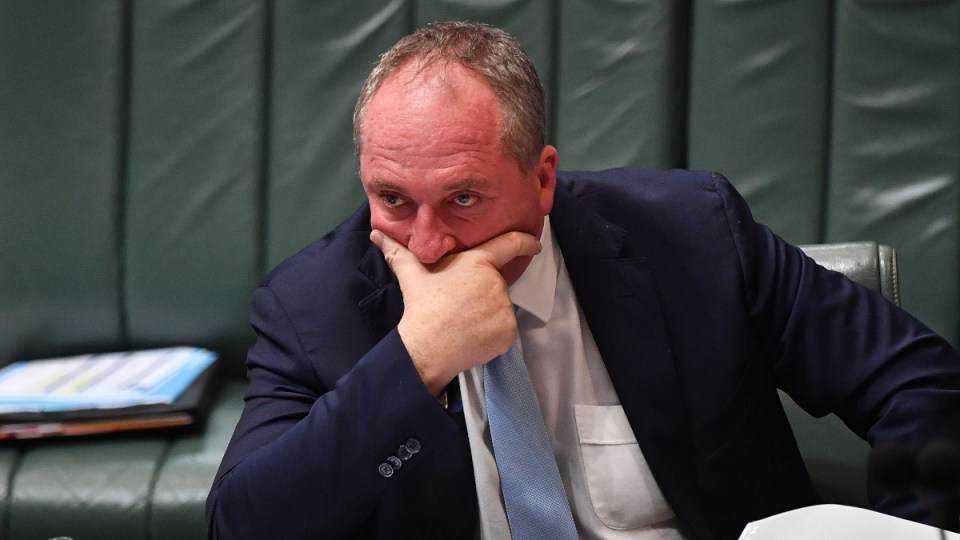 Barnaby Joyce faces a possible challenge to his Nationals leadership, as the party also looks to upturn its coalition deal with the Liberals.

Mr Joyce’s leadership, and that of deputy David Littleproud, will be spilled at a meeting of Nationals MPs next week – a standard move for the party after an election.

“Once the election is over, you go back to two separate parties and negotiate a coalition,” Mr Joyce told ABC News Breakfast.

“I’m very confident about the democratic process being the best way to determine which way a party goes, and I accept the outcome of it.”

Likely contenders are yet to publicly confirm challenges. But former leader Michael McCormack – a critic of Mr Joyce – said at the weekend that the Nationals would have done better at Saturday’s election if he still been in the top job.

“Some of the language around net zero was damaging,” Mr McCormack said on Tuesday.

“In the midst of an election campaign that was already very closely contested, I know it didn’t help.”

Mr McCormack would not be drawn on whether he would have another crack at party leadership.

Asked if it was likely the party would re-elect Mr Joyce as leader, Mr McCormack said it was a matter for the party room.

“There are very much some rusted on people who would be inclined that way but other moderates who may think we have to learn from the lessons of the election and take heed,” he said.

Mr Chester has been dumped from Cabinet twice by Mr Joyce, and lashed out after the weekend’s election results. He said the Nationals needed to do more to appeal to younger voters, and also attacked their record on climate change.

He would not confirm a leadership challenge, however.

“I’m considering it. I’m not trying to be evasive. I haven’t reached a conclusion,” he told the ABC on Tuesday.

“I will go for a long run and think about it more today. It’s a question of what your colleagues want. There will be 22 colleagues in the room. They will reach their conclusion where they think the party needs to head.”

Another potential challenger is Mr Littleproud, long touted as a future Nationals leader. He has also criticised the Coalition for moving too far to the right, including comments from rebel Queensland senator Matt Canavan that the commitment to net-zero emissions was “dead”.

“If you want to go down the rabbit hole and move extreme to the left or the right, you will lose,” Mr Littleproud told Nine.

Since the weekend, Mr Joyce has signalled the Nationals’ commitment to net-zero could be reviewed. An unrepentant Senator Canavan has also flagged another fight on emissions targets.

“Absolutely not going to budge – I’m going to actually double down on my fight against net zero,” he told Sky News Australia on Tuesday.

“This thing is destroying the world.”

Mr Joyce denied his role as deputy PM in the Morrison government had been a drag on the Liberal Party, despite independent candidates successfully weaponising his unpopularity among inner-city voters.

“People are not that stupid … they know whether they’re voting for a Nationals candidate or Liberals candidate … there were a lot of other issues at play,” he said.

No members of the Nationals had told him his unpopularity had cost the government the election, he said.

Mr Joyce said the Nationals were successful last Saturday because they held on to all of their existing seats, unlike the Liberals. There were swings to the Nationals in six seats: Mr Chester (Gippsland), Mr Littleproud (Maranoa), Andrew Gee (Calare), Anne Webster (Mallee), Kevin Hogan (Page) and Mark Coulton (Parkes).

Mr Chester said Mr Joyce could hardly take credit for the wins, given those seats were secured under different party leadership.

“It’s a bit spurious to simply point to the scoreboard and say we held our seats when most of those seats came on board during the period of Warren Truss’s leadership and then Michael McCormack held them,” he told ABC Radio.

However, Mr Joyce does have the backing of Senator Canavan.

“Barnaby has immense experience. He’s been in a shadow cabinet that has won government. So, it would be a little bit foolhardy to get rid of that experience at a time when we need to hold this government to account,” he said.

Mr Joyce also has the public support of Queensland Nationals MP Keith Pitt. He also called for any leadership challengers to publicly declare their hand before the party room meeting.

“We will need people who have had that experience – Barnaby has done well, the Nationals have done well, we have done our job,” he told Sky News.

Death to traitors! Ukraine partisans assassinate Russian official behind enemy lines
Paul Bongiorno: It won’t be easy for Anthony Albanese, but he says he’s up for it
Today's Stories