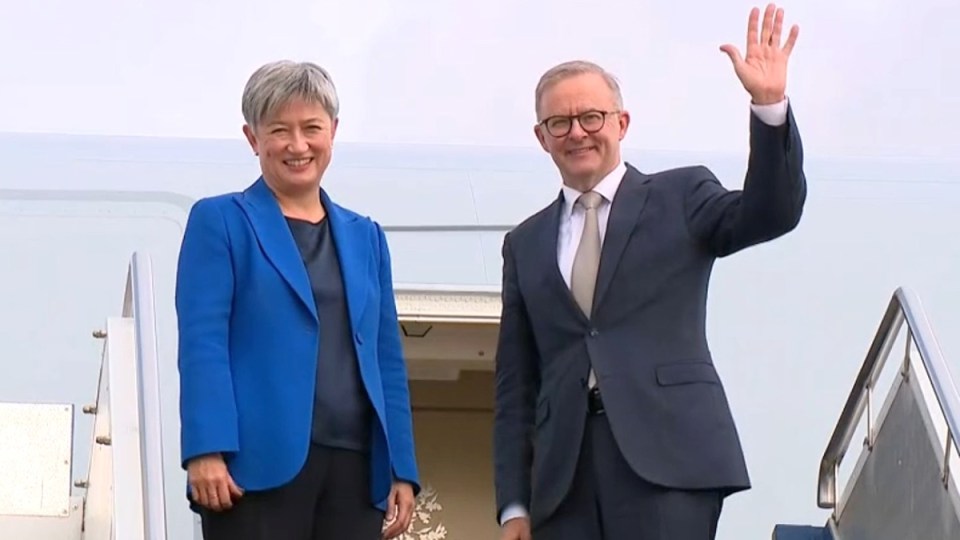 Foreign Minister Penny Wong and Prime Minister Anthony Albanese headed to Tokyo just hours after being sworn in on Monday.

New Prime Minister Anthony Albanese says he has secured the backing of crossbench MPs on supply and confidence, as Labor edges towards a likely majority government.

In his first press conference after being sworn in as PM on Monday morning – in front of the Australian, Indigenous and Torres Strait Island flags – Albanese outlined his plans for government.

“We will establish a national anti-corruption commission. I’ve asked for that work to begin already. I’ll bring together an employment summit, and I thank those people in the business community and in the trade union movement for the discussions that we’ve had already about the way that that can be progressed. And we will, of course, be advancing the need to have constitutional recognition of First Nations people, including a voice to Parliament that is enshrined in the constitution,” he said.

Mr Albanese said Parliament would sit before the end of July – and “it may well be much earlier”.

Across the country, 12 seats remain in doubt with votes still being counted. By Monday afternoon, the Australian Electoral Commission had Labor ahead in 76 seats (the minimum it needs for a majority).

“I am hopeful that we will receive a majority of members of the House of Representatives. At this stage, that looks most likely,” Mr Albanese said.

“I have received and have had discussions with the existing members of the crossbench and received confirmation from Rebekha Sharkie, Bob Katter, Andrew Wilkie, Helen Haines and Zali Steggall that they would not support any no confidence motions against the government, and that they would also secure supply.”

Mr Albanese was sworn in by Governor-General David Hurley, along with four other senior Labor figures, early on Monday.

It is the fastest swearing in of a new ministry after an election since Gough Whitlam won for Labor in 1972. The fast-tracking is due to Mr Albanese and Senator Wong needing to attend Tuesday’s Quad leaders’ summit in Japan.

The others sworn in on Monday were Deputy PM and Employment Minister Richard Marles, Foreign Minister Penny Wong, Treasurer Jim Chalmers and Attorney-General Katy Gallagher. Senator Gallagher is also Minister for Women and Minister for Finance.

Mr Albanese said the rest of the new ministry would be sworn in next Wednesday.

He said his attendance would show a change in how Australia would be run, while there would also be stability for international relations.

“The meetings that we will have … are going to be very important, in a good way, to send a message to the world that there’s a new government in Australia,” he said in Canberra.

“It’s a government that represents a change in the way we deal with the world on issues like climate change, but also a continuity in the way we have respect for democracy and the way that we value our friendships and long-time alliances.”

Mr Albanese received a phone call from Mr Biden on Sunday night, which the PM said was “fruitful and productive”.

“The relationship with the United States is our most important, along with our relationships in the region and our multilateral commitments as well,” he said.

Expected to be on the agenda in Tokyo is the role of China within the Indo-Pacific region, coming off the back of a recent security pact with the Solomon Islands.

“It is China that has changed, not Australia, and Australia should always stand up for our values and we will in a government that I lead,” he said.

“What we should do is put Australia’s national interests first and not attempt to play politics with national security issues.”

According to a White House readout, Mr Biden congratulated Mr Albanese on the election win and reaffirmed his nation’s “steadfast commitment to the alliance”.

He said the Quad summit was a vital opportunity to exchange views and continue to drive practical cooperation in the Indo-Pacific.