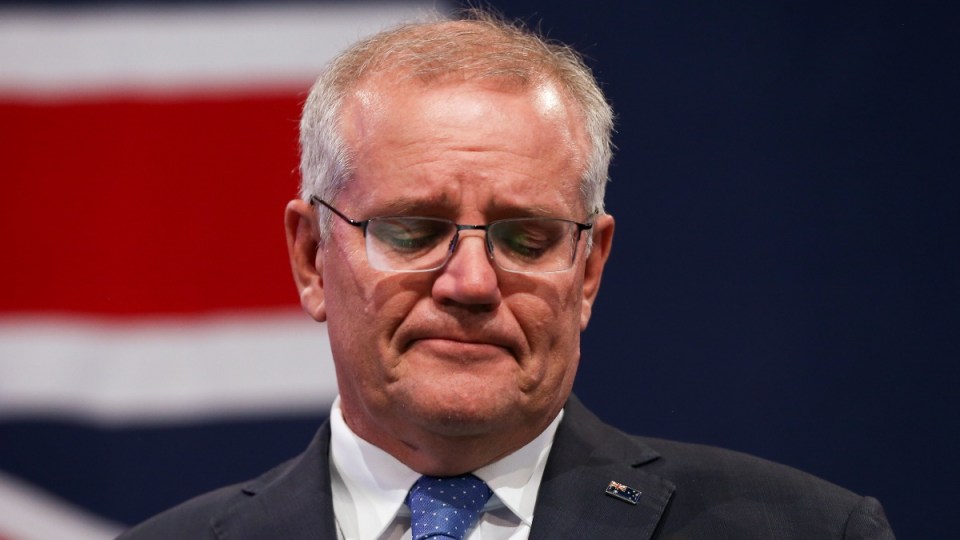 Scott Morrison said at the beginning of this seemingly never-ending election campaign that Australia faced a choice and not a referendum.

This was the ever-impatient Morrison trying to shape the narrative. The either/or alternative of how election contests pan out are well known with an incumbent wanting a choice for the future against a referendum on the past which they might lose.

Labor wanted a referendum, but the party’s polling suggested the Australian public might be up for both.

The result was a referendum on Morrison’s record and a negative answer to the choice the outgoing prime minister set up.

A majority of Australians said no to the past and looked to Labor for the future – based on a two-party preferred measure.

What’s been a rollercoaster election has produced a dramatic piece of election history.

Morrison, who must carry every ounce of the heavy weight of this punishing defeat, has shaken and broken a record that usually sticks.

He is now the fourth Liberal leader since the Second World War to be defeated by a Labor Party coming from Opposition.

Much has been said about how hard it is for Labor to win from Opposition, but the other side of that coin is just as difficult.

Morrison has broken that brick wall like a bulldozer without a handbrake.

There is something more fundamental though. Morrison is the first Liberal leader in the party’s history to fail at his first bid for re-election.

Billy McMahon lost to Gough Whitlam in 1972 after just a year in office, but he had never been to the people before and was handed the genuine political hospital pass after John Gorton was dumped.

No, Morrison was elected and had three full years to establish himself. As Paul Keating has said many times, the Australian public invariably gives a leader a second go. Morrison has not won a second go and he has only himself to blame.

In the process, Morrison has all but broken the Liberal Party. This was not an election that should have been lost.

Even with the mistakes and missteps, the fundamentals of the term should have been preconditions for re-election.

The pandemic was handled reasonably in terms of health and economic outcomes, but shortcomings were made worse by how Morrison handled himself.

At the same time, Morrison couldn’t help himself at every turn, particularly in respect to how women were addressed, treated and too often disrespected.

The new Prime Minister Anthony Albanese summed it up in mid-March last year after tens of thousands of women marched around the country and Morrison not only refused to meet them on their terms but suggested they were lucky not to face armed military resistance.

“Not so much a tin ear as a wall of concrete,” Albanese said.

From that time Morrison was on borrowed time. He failed to understand the genuine depth of dislike and disgust women felt for the way they were being treated.

The wall of shame is dark: A brutal takedown of former Australia Post chief executive Christine Holgate, the lackadaisical attitude to Sex Discrimination Commissioner Kate Jenkins’ Respect@Work report more than two years ago, and then the “how did that happen” response to the revelations of bad behaviour in Parliament House headed by the alleged rape of Brittany Higgins.

Looking back at all of this, it is impossible to see how a government could have survived.

This was surrounded with games and three-card tricks over climate policy – helped by a gun-shy Labor Party that was outsmarted by the Greens who learned the lessons of 2019 and set about finding a way through – and the block-headed refusal to do anything about a federal anti-corruption body which didn’t ring fence politicians: The writing was on the wall.

Throughout the campaign, Morrison showed day after day he is not the “genius” campaigner so many claim he is.

His nonsense strategy to go after otherwise safe outer-suburban Labor seats – none of which fell to the Liberals – was always a fool’s errand. The real work of protecting the heartland was left unattended and half a dozen Liberals became electoral roadkill.

The day-to-day campaigning was the work of a one-trick pony and anyone anticipating his next move had to only look at what he did in 2019. He is as unimaginative as a Burger King ad.

Morrison took responsibility for the loss, which is the least he could have done but he was hardly self-aware in his concession to Labor.

He did not acknowledge the savage swings against Liberals in federation seats (previously held for all time) and the very heartland that has made the party what it is.

Instead, Morrison suggested it was all part of some vague “vibe” rumbling through society.

He leaves in the same way he behaved for so much of the time he was privileged to hold the nation’s greatest office. He still doesn’t get it.

This article first appeared in InQueensland. Read the original here.