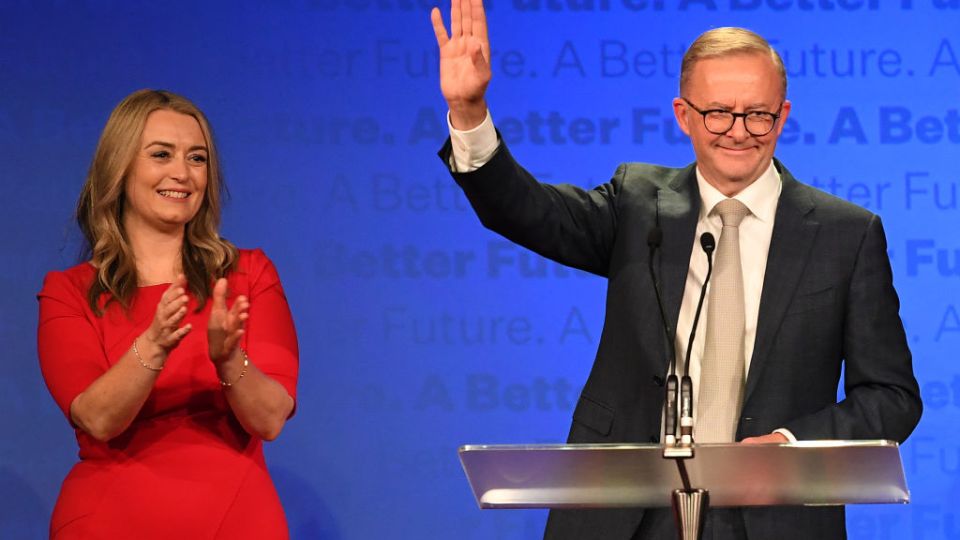 Mr Albanese outlined his plan for the next few days and beyond after a wild election night Photo: Getty

Anthony Albanese is set to lead Labor back into government after emerging alone with the ability to form a majority following one of the wildest election results in living memory.

Australia’s incoming 31st Prime Minister shed a tear as he took to the stage to greet Labor party faithful and claim victory possibly as leader of a minority government.

“We made history tonight,” Mr Albanese said. “The Australian people have voted for change.”

Labor appears set to snatch power despite the party’s primary vote declining alongside the Coalition’s as voters delivered a result that was most of all a rebuke to the status quo.

With nearly 60 per cent of the vote counted, the future shape of government was unclear and Mr Albanese being forced to lead a minority government remained a distinct possibility.

Labor was projected to be the winner in 72 contests by the ABC, or four short of a majority with more than a dozen contests still being counted.

Mr Albanese first pledged to recognise indigenous Australians in the constitution as he promised to lead a government based on the principles of leaving no one behind and forging common ground.

“I want to bring Australians together,” he said. “I want to seek our common purpose and promote unity and optimism, not fear and division.”

Seats were projected to fall in all directions across a reshaped electoral map including to Greens and “teal” independents set to lead a vastly expanded cross bench.

Prime Minister Scott Morrison resigned as the leader of the Liberals as angry voters punished the party most of all, decimating its inner-city constituency and failing to make outer-metropolitan gains.

“I’ve always believed in Australians and their judgement, and I’ve always been prepared to accept their verdicts,” Mr Morrison said.

“Tonight they have delivered their verdict.”

The Coalition had only been declared the winner in 55 seats leaving it more than 20 behind the size of its partyroom in the last parliament.

Treasurer Josh Frydenberg was the highest profile Liberal casualty; He was bested in Kooyong by independent challenger Monique Ryan – one of many women independents to topple inner-city Liberal strongholds in Mackellar and, on projections, in North Sydney and Goldstein while leading the WA seat of Curtin.

“Our government was not listening to us, so, we have changed the government,” Dr Ryan said.

Ten independent MPs were projected to take their place in the next Parliament.

They will be joined on a cross bench double the previous size by as many as three Greens MPs after the party was ahead in two seats in Queensland after winning a historically high vote.

Peter Dutton was likely to emerge from a tough fight in his seat of Dickson as the presumptive leader of a diminished party room.

“We have as a Liberal family suffered a terrible day today,” he told a sombre gathering.

The National Party emerged relatively unscathed from electoral upheaval leaving major doubt about the future shape of any coalition with the Liberals.

“We have won Griffith and Ryan and we are on track in Brisbane, Macnamara and Richmond, and other target seats are still unresolved.

There was an estimated 3 per cent swing to Labor nationally but votes shifted greatly between states and seats.

A huge, unexpected swing to the ALP in Western Australia emerged late on Saturday to bring Labor tantalisingly close to government and oust serving MPs including Ken Wyatt in Hasluck.

But in Tasmania the party secured the fate of its most marginal seat, Tasmania’s Bass despite an ALP campaign.

Labor MPs also lost contests including Kristina Keneally in Fowler in Sydney’s west where she had been attempting to drop in from the Senate; Terri Butler conceded the seat of Griffith to the Greens.

In the coming days, if there is a minority parliament, we will work towards delivering a stable, effective and progressive government for the country,” Greens leader Adam Bandt said.

Labor appeared set to claim Liberal seats in Robertson, Reid, Higgins and in a major claim on South Australia the seats of Boothby and Sturt.

Finance Minister Simon Birmingham said the loss of inner-city Liberal moderates had been at least in part a “contagion” that followed the preselection of Katherine Deves, whose antitrans statements were condemned by moderates who called for her to be dumped. Ms Deves failed in a bid to win the seat of Warringah.