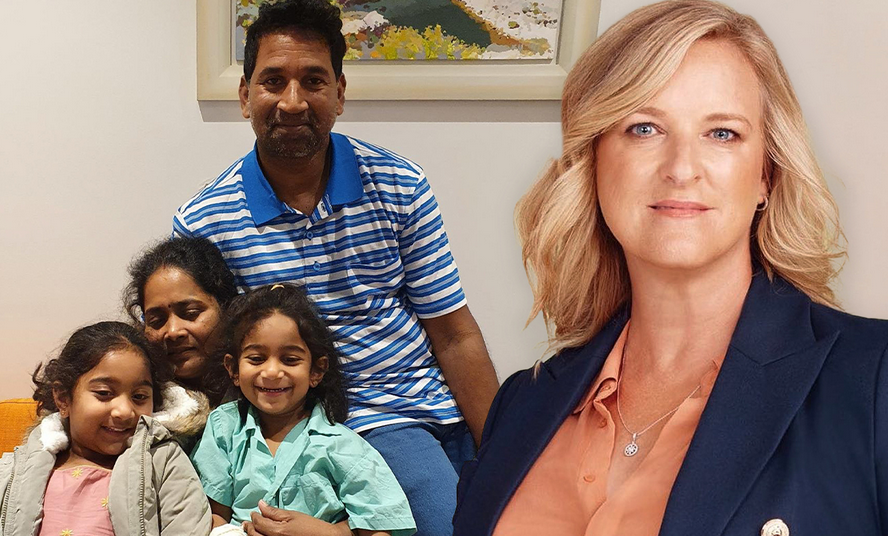 Michael Pascoe hopes his vote for Kylea Tink in North Sydney will help to end the Bilolea family's years of torment.Image: TND

Michael Pascoe Contributing Editor
5:54am, May 21

I have a very peaceable dog, a lover not a fighter, happy to befriend or at least ignore every dog he meets – with one exception*: Trent Zimmerman’s Simba.

Nixon (so named because he somewhat resembled a canine Tricky Dicky when he was caught looking serious as a pup) has given a good impression of wanting to remove Simba’s throat any time their paths have crossed.

I have apologised to Trent and spoken harshly to Nixon about his behaviour, explaining that it is not Simba’s fault that Trent and every other federal Liberal MP lacks the ticker and humanity to stop the cruelty inflicted on the Biloela family for more than four years now.

They all value their pre-selections more than the lives of those two little girls, Kopika and Tharnicaa, and show no sign of caring that their leader, Scott Morrison, continues to lie about the government’s ability to let the family go home to Bilo’. He can stop the needless and very expensive torture any time he wants.

No, Nixon has not actually said that is the specific issue that so riles him about the North Sydney MP (via his dog) but it’s easy enough to deduce.

All the other issues at stake in today’s election – and there are many of them – are, quite frankly, way over Nixon’s head.

But he has some understanding of children; children are closer to him and he to them. And he understands cages and cruelty. Like many a dog, he seems to sense evil when it’s afoot.

That’s what the treatment of Priya, Nades, Kopika and Tharnicaa has become – a display of evil for political purposes, to cover up the appalling original mistake of the big pre-dawn raid, a government enmired in its own failure.

Nixon is a single-issue dog. The Biloela family alone is enough reason for him to want a change of government, given that Labor and the quality independent candidates have pledged to allow the family’s return home while the Coalition ducks and weaves and lies about it.

The matter of integrity

So I have the pressure of Nixon’s stare on me as I vote today, but there are other issues I have considered.

For me, the broader issue of integrity in government is crucial. Without a commitment to integrity we are doomed to continue our slide towards the corruption of America’s Trumpian politics.

For the past two years The New Daily has been steadily exposing the unprecedented level of the Morrison government’s corrupt use of public money for its political ends – billions of dollars in multiple rorted grants schemes, uncontested tenders and outright gifts.

Now Trent Zimmerman has stuffed pamphlets in my letter box effectively boasting about it: “TRENT’S PLAN FOR OUR HARBOUR FORESHORES AND LOCAL BUSHLAND”.

Trent is a former North Sydney councillor. That sort of work, apparently, is supposed to determine our federal government.

A companion piece of advertising – part of the nasty negative campaign against the impressive community independent candidates – alleges that independents won’t be able to deliver the bribes and pork your Liberal member does.

So according to the Morrison government and all its members, public money is to be used to buy votes, not used for the best outcome for our Commonwealth, not used on the basis of the greatest need, not prioritised to deliver the biggest bang for our hundreds of billions of borrowed bucks. 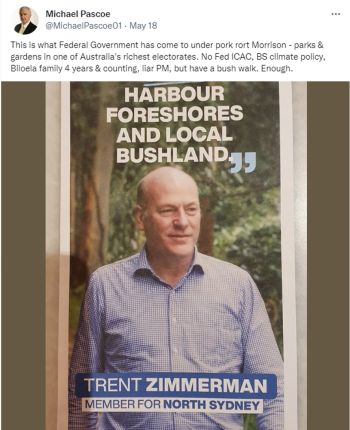 The supposed leader of the Liberal Party’s compromised “moderates” rump, Simon Birmingham, declared over the obscene carpork scandal that people voting for the government meant it was perfectly fine.

It is not. It has long since tipped beyond the level of venality to outright corruption. No wonder Scott Morrison and all but one of his MPs will only consider a toothless and useless integrity commission.

Blaming the Opposition for not even bringing his bill to the floor of the Parliament is another whole level of Mr Morrison not holding a hose.

Were I a single-issue dog owner, the pledge by the quality independents and Labor to produce a genuine federal ICAC would be enough to win my vote.

On climate policy, the choice is stark and obvious. I do not understand how anyone with even a little understanding of the science, the threat and the opportunities could possibly vote for the worst option – the Coalition, riven as it is with climate deniers and climate don’t-cares, beholden to Big Carbon.

The immediate past deputy prime minister, Michael McCormack, was at least being honest when he said “we’re not worried, well I’m certainly not worried, about what might happen in 30 years’ time”.

It is the voter’s responsibility, perhaps the voter’s hope, to choose the least-worst option. On the role and treatment of women, that can’t be the Morrison mob.

Julia Banks’ columns in The New Daily during this never-ending election campaign have relentlessly exposed the Morrison government’s inherent misogyny. Her column yesterday was red hot in calling out the way the integrity-free Liberals have attacked their independent opponents:

“They have also facilitated a bubbling to the surface of their deeply embedded sexism, simply because they are being challenged by professional women in the form of the Teal independents.

“That the Liberals think it’s OK to describe these women, who include doctors, lawyers, businesswomen and an esteemed foreign correspondent, and the countless men and women in their communities, as everything from ‘puppets’ to ‘fakes’ to ‘frauds’ is disturbing and vile.

“Howard disgustingly referred to these women as ‘anti-Liberal groupies’. A groupie is defined as a young woman who follows celebrity or pop groups as a trade for sexual favours.”

There are other issues, important issues, that also are worth considering – getting past the Coalition’s preferred (and false) cliches about their economic management, the major parties’ dud housing policies in the face of a crisis, our appalling diplomatic failures that have resulted in Australia being the only country on earth unable to talk to China, the preparedness of a loose-cannon defence minister to endanger national security for domestic political points, the lack of ambition or vision for Australia to realise its potential to be a better country for all, symptomatic of a tired government no longer fit for purpose.

Journalists generally aren’t supposed to announce who they’ll vote for, but the balance today in working out the least-worst option is so demanding, the risk of continuing on the most-worst path so great – and Nixon’s stare so commanding – that I will.

I have voted for both major parties in the past, but today I am fortunate to have the option of an impressive independent candidate in my electorate, one that is now marginal.

Kylea Tink’s campaign colour is pink, but she fits well under the ‘Teal’ umbrella. Hopefully the strength of the Teals’ commitments will be able to keep the bastards honest and instil a little more backbone.

So I will be voting one Kylea Tink, #2 Labor and the rest of the numbers can fall where they will until a coin flip decides whether Clive Palmer’s UAP or One Hanson is last.

I believe I owe that to this land, my children and grandchildren – and Kopika and Tharnicaa.