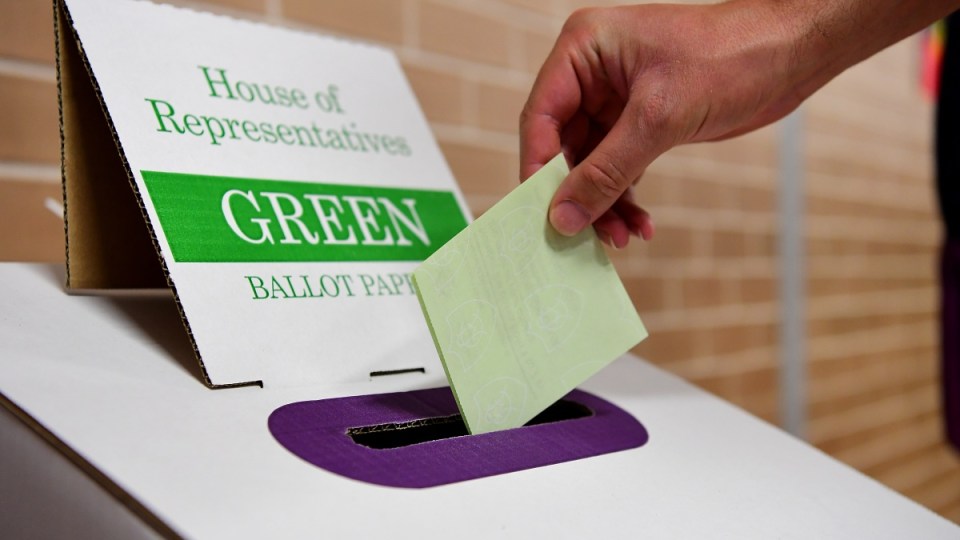 Early vote counting shows swings away from the governing Liberal-National coalition and Labor, and towards independents and minor parties.

With 0.5 per cent of the vote counted nationally, there appeared to be a one per cent swing away from the coalition and 3.4 per cent from Labor.

However, the swing against the government was larger in metropolitan seats, with the Liberals down three per cent and Queensland’s Liberal National Party down 4.4 per cent, while Labor was down two per cent.

The Greens, United Australia Party and independents were receiving swings to them in city seats.

Labor showed early signs of being on track to take its first seat off the Liberal National Party – Bonner in Brisbane held by Ross Vasta.

Liberal MP Jason Falinski in Mackellar was facing an 18 per cent swing against him, challenged by independent Sophie Scamps.

The NSW seat of Richmond was showing a 6.4 per cent swing against Labor MP Justine Elliot towards the Nationals’ Kimberly Hone.

In the Tasmanian seat of Lyons, Labor MP Brian Mitchell is under pressure from the Liberals’ Susie Bower who has a 5.7 per cent swing to her.

Labor started with 68 seats, plus notionally the new Victorian seat of Hawke, and required 76 seats for a majority in the 151-seat House of Representatives.

Scott Morrison’s government went into the election holding 75 seats, having lost Stirling in WA in a redistribution.

Seven lower house crossbenchers are hoping to hold their seats and 40 are up for grabs in the half-Senate election.

The first of more than 17 million ballots began to be counted when polls closed at 6pm, that figure including the votes of more than 5.5 million who voted early.

With three of the most crucial and hotly contested seats in Western Australia, that count promises to go long into the night if there is no clear trend in the early counting.

A confident and upbeat Mr Albanese cast his vote in his home seat of Grayndler, saying he could feel the momentum that signalled a Labor victory.

“I want to represent all Australians. I want to unite the country,” Mr Albanese said.

“I’m positive and hopeful about a good outcome tonight.”

The opposition leader says he’s aiming to form a majority government – which means a minimum target of 76 seats.

“A vote for an independent is a vote for chaos and governments having to negotiate their existence every single day at a time of great uncertainty,” the Prime Minister told ABC TV on Saturday.

Mr Morrison also revealed an asylum seeker vessel on its way to Australia was turned back last week, and seized on the news to spruik his government’s border policies.

“I’ve been here to stop this boat but in order for me to be there to stop those that may come from here, you need to vote Liberal and Nationals today,” he said.

The result, whatever it turns out to be, will mark the official end to one of the most bitter and divisive campaigns on record, with the major parties and teal independents trading accusations and insults.

In Kooyong, where Josh Frydenberg has fought the battle of his political life to fend off teal independent Monique Ryan, the Treasurer even dragged his opponent’s mother-in-law into the fight by claiming she had told him that he had her support.

Things were no more respectful in Sydney, where Liberal Dave Sharma battled to defend his Wentworth seat from teal challenger Allegra Spender and accusations of election-poster vandalism and improper display marked the contest.

What was noticeable was Mr Morrison’s absence throughout the campaign from those two seats and three more electorates.

The count begins: The 17 million ballots will determine Australia’s future