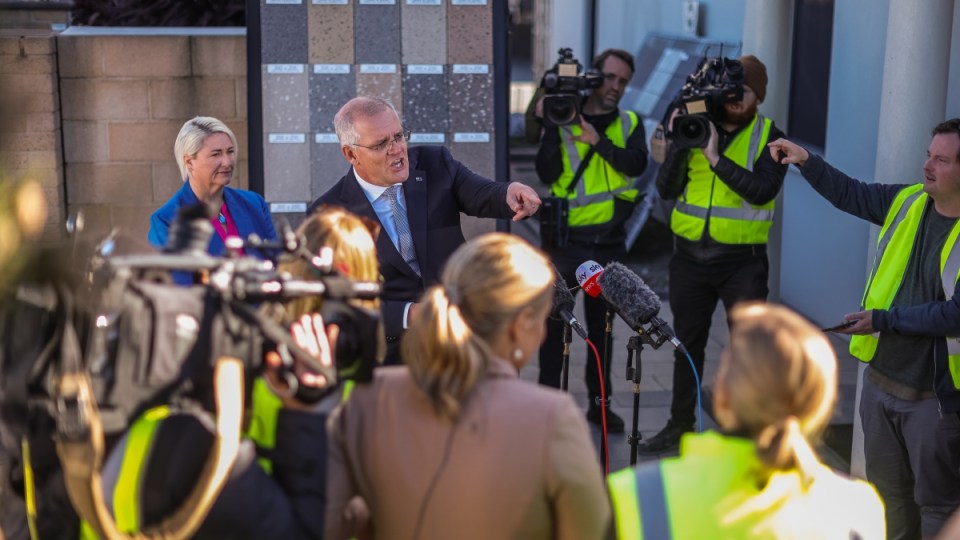 Stephanie Richards Political Reporter
11:55am, May 19

Mr Morrison’s attack on Thursday came after Mr Albanese accused the Coalition of making fun of his surname.

While stopping short of labelling Coalition election ads as racist, Mr Albanese told about 400 members of Sydney’s Italian community at Club Marconi in the city’s south-west on Wednesday that the Liberals thought it “was still OK” to make fun of his name.

“People of my age and older in this room will know that school people made fun of your name,” he said.

“My opponents think it’s still OK to make fun of someone’s name in their advertising, and that is a matter for them to consider.”

Throughout the campaign, the Coalition has run advertisements with the slogan “It won’t be easy under Albanese”, a play on the Labor leader’s name. Mr Albanese indicated concerns with the ads had been raised by multiple people.

Campaigning again in the Tasmania on Thursday, Mr Morrison shrugged off the claims.

He accused Mr Albanese was being a “hypocrite” because Labor’s campaign spokesman Jason Clare last month joked about the Coalition sending “some bloke called Zed” to the Solomon Islands – referring to Pacific Minister Zed Seselja.

“He’s (Mr Albanese) quite happy to dish out for criticism and abuse of me, as he has done over the last three years,” Mr Morrison said.

“I’m big enough to take that.

“If he’s that precious and he can’t hack a campaign, then how on Earth is he going to handle running this country?”

Mr Morrison was also quick to pick up on an apparent stumble by Mr Albanese on Thursday, when he incorrectly stated that Australia’s borders were closed – even though they have been open since February.

The Labor leader told ABC’s News Breakfast that closed borders were helping to keep the unemployment rate down.

The Prime Minister seized on the error.

“This guy doesn’t know whether he’s coming or going,” he said.

Cost of living pressures remain a focus in the dying days of the election campaign. Official employment data released on Thursday showed Australia’s jobless rate fell to 3.9 per cent in April, the lowest since 1974.

Mr Morrison hailed the fall as a proof of his government’s economic success.

“Today, for the first time since 1974, unemployment in this country once again has a three in front of it,” he said.

Back in Lyons, held by Labor on a margin of 5.2 per cent, on Thursday morning, he was also defending the Coalition’s economic record.

At a briefing at a paving manufacturing business south of Launceston, he was grilled about the cost of living crisis and wage rises.

He drew a long link between empathy and economic performance, when he was asked how he would become a more empathetic leader. The questions followed his recent comments about moving on from being a “bulldozer” to become more consultative and sensitive, if he wins Saturday’s election.

Mr Morrison said he would demonstrate empathy in his economic management. He said he and wife Jenny had “sat with people in their worst of times and their best of times”, and that drove him to improve the country’s finances.

“The empathy, in particular, I’ve been able to demonstrate is the empathy that comes with action,” he said.

“When you understand the pressures that Australians face, you do take action.

Mr Albanese has attacked the government over the “real wage cut” for workers after annual pay packets rose 2.4 per cent despite inflation surging to 5.1 per cent.

In Sydney on Thursday, he underlined his party’s policy on closing the wage gap between men and women.

“We will have reform … including making gender pay equity an objective of the Fair Work Act,” he said.

“When you look at those industries which are feminised, which have lower wages, then I think that that is something that has to be addressed.”

Meanwhile, new polling by RedBridge for the ACTU, reveals almost 60 per cent of voters are dissatisfied with the Morrison government’s handling of cost of living pressures.

Almost 80 per cent of people would be more likely to vote for a party committed to stopping wages falling behind the cost of living.

More than 80 per cent said wages should rise with the increasing cost of living, with more than half noticing their income go backwards in real terms.