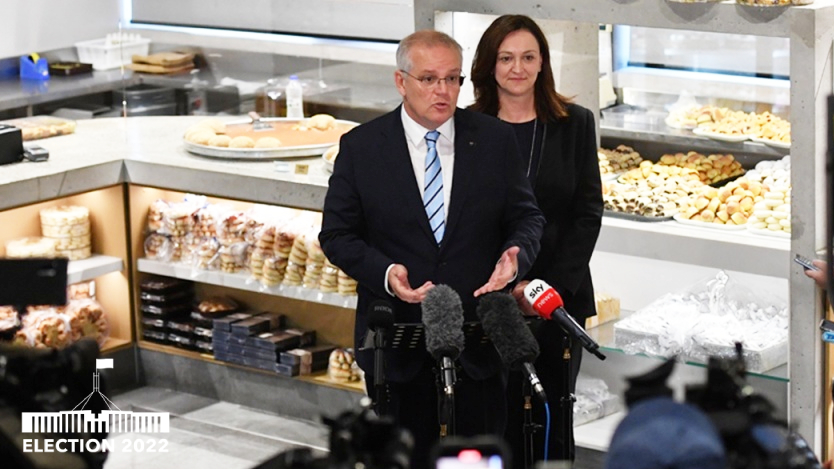 Scott Morrison has vowed to show his empathetic side more, if the Coalition wins Saturday's election.

Prime Minister Scott Morrison has denied his attempts to pivot toward a softer, more empathetic persona is based on negative polling on his popularity.

Late last week, Mr Morrison admitted he could be “a bit of a bulldozer” but implored Australians to stick with the Coalition at Saturday’s federal election, saying he would “explain my motives and my concerns and empathise a lot more”.

On Monday, Mr Morrison denied his about-face was due to poor polling for the government ahead of voting day and his sagging popularity rating.

“I don’t agree with that,” he told the Seven Network when the proposition was put to him.

“I’m just being honest with people. Over the last three years, it’s required a lot of strength to take Australia through [the pandemic] and we are continuing to need that strength.

“But what will change in the next few years is opportunities will increase.

“As we go into the next phase we are going to find that extra gear. We will move into that higher gear needed to secure that opportunity.”

The Coalition remains behind in the polls, trailing Labor on a 54 per cent to 46 per cent two-party preferred basis, according to the latest Newspoll.

Mr Morrison leads his Labor rival Anthony Albanese on the preferred prime minister measure by a single point – 43 per cent to 42 per cent – but has taken a hit recently with a steady decline from 45 per cent since the end of April.

Mr Morrison has tried to sell a more positive message to voters disturbed by the consistent barbs and attacks by both parties in the lead-up to the vote.

“What we provide is the strong plan … that does deliver a strong economy which means that you can plan for your future with confidence and realise your aspirations,” he said.

Mr Morrison’s pitch at the Coalition’s campaign launch on Sunday centred around aspiration and ambition, as he unveiled a new housing policy to help young people get into the market by accessing 40 per cent of their superannuation up to $50,000.