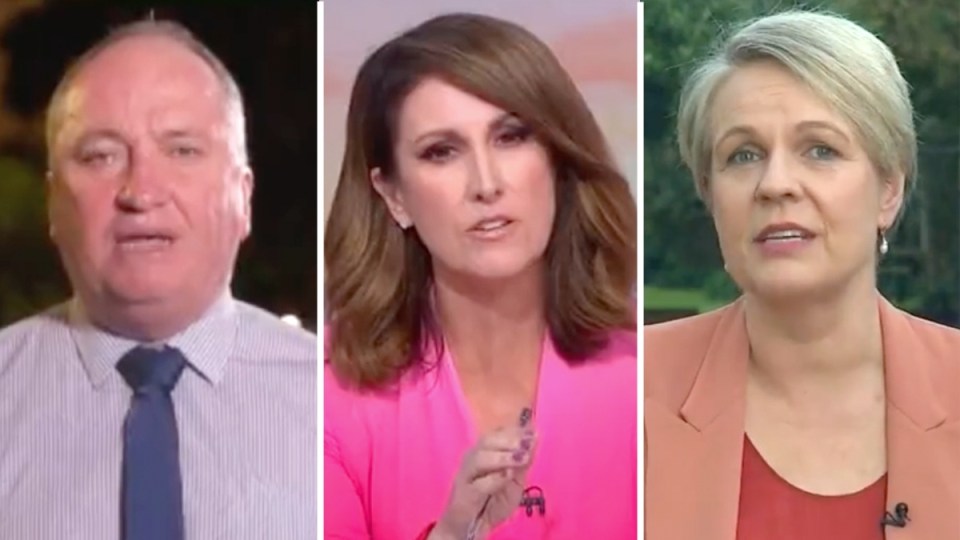 Host Natalie Barr had to intervene to tone down a heated clash between Barnaby Joyce and Tanya Plibersek.

But it quickly turned into a verbal brawl, prompting Barr to say she “felt sorry for the people of Australia trying to figure out what on earth we are voting for on Saturday”.

Barr stepped in after Mr Joyce blew up at what he considered Ms Plibersek’s failure to answer a question about Labor’s Help to Buy scheme.

Under it, a Labor government would buy stakes of up to 40 per cent in 10,000 homes each year, to help first-home buyers get into the market.

Mr Joyce fired up when Ms Plibersek appeared unable to say whether it was taxable or gross income.

“It’s your policy, can you explain your own policies Tanya? It’s the last week of the election,” he yelled.

“You are such amateur hour. I don’t know how you can get so far into your campaign and not understand your own policy.”

Ms Plibersek: “It’s the taxable income – I don’t know why it’s so complicated for Barnaby.”

Ms Plibersek said she “felt embarrassed” that Mr Joyce “carries on like that” – and sorry that he was Australia’s Deputy Prime Minister.

But Barr said she felt embarrassed that Australians had to make a difficult choice on election day on Saturday.

“I feel sorry for us, because we’ve got to walk into those polling booths and we have to try and work out what on earth we’re voting on,” she said.

Monday’s TV clash came as Superannuation Minister Jane Hume admitted the Liberals’ plan to allow first-home buyers to access 40 per cent of their superannuation up to $50,000 to buy a house would drive up house prices in temporarily.

Campaigning in Queensland on Monday, however, Prime Minister Scott Morrison denied that. Instead, in conjunction with other government policies such as HomeBuilder, it would help drive up housing supply, he said.

“We’ve thought carefully about this policy and when you take
this policy together with the downsizing initiative – remember this gives people access to their superannuation to buy a home. That includes new homes. New stock,” he said.

“There are whole areas of new land opening up for development, which will mean new stock. That means more supply. That means downward pressure on otherwise rising pressure.”

Mr Morrison also scoffed at suggestions that other senior Liberals – including John Howard, Peter Costello, Malcolm Turnbull and Peter Dutton – have written off the idea of using superannuation to buy houses.

“I was with Peter Dutton and John Howard yesterday and they were enthusiastically in support of the plan. This is something I’ve been working towards for some time. I’ve had a great passion for this,” he said.

Asked if that meant Mr Dutton and Mr Howard had changed their minds, Mr Morrison answered with just one word: “Clearly.”

But he refused to say if the government had commissioned modelling showing the projected impact of its new superannuation policy on house prices.

“I simply don’t agree with the assertion that this would have a negative impact,” Mr Morrison said.

“You have to look at the balance of policies that this is addressing.

Mr Morrison was also asked to respond to Labor’s claims that his government broke faith with the US by not seeking bipartisan support for the AUKUS pact before signing up to it.

The Biden administration reportedly said the defence alliance needed bipartisan support, but the opposition was not briefed on it until a day before it was announced.

Asked if he deliberately misrepresented the bipartisan nature of AUKUS, Mr Morrison said: “That is absolutely false”.

“We understood absolutely what the requirements were and we met them 100 per cent,” he said.

“This was not something that I was going to be loose about, and I wasn’t loose about. When the opposition needed to be informed, then they were, just as other members of the government were informed at that time.”

Mr Morrison made a second stop in the marginal seat of Blair, west of Brisbane and held by Labor on a 1.2 per cent margin, on Monday morning before heading interstate later in the day.