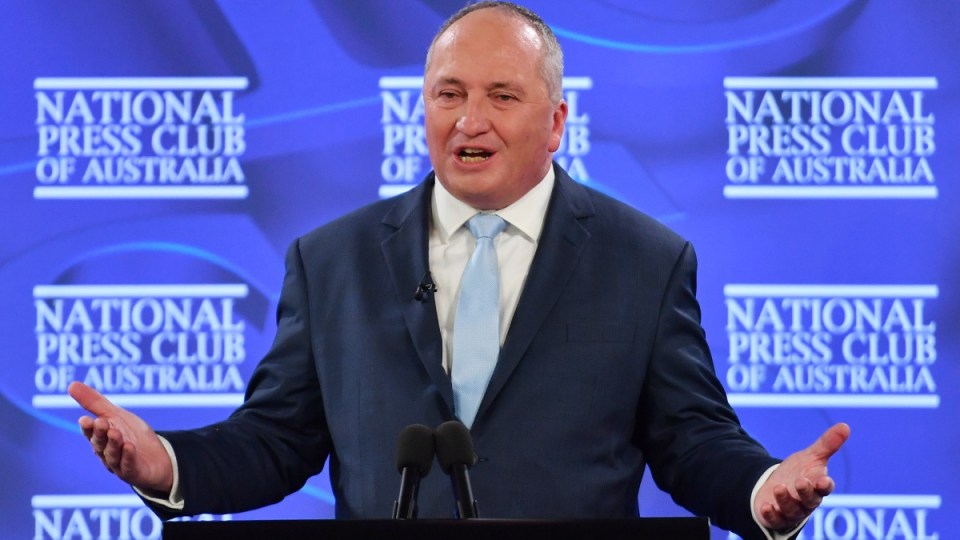 Sitting Liberals MPs face strong independent challengers running on a pro-climate and pro-integrity agenda, who are tying a vote for the government on May 21 as a vote for Mr Joyce.

But Mr Joyce said supporting coal mines while agreeing to setting net-zero emissions by 2050 as a target is practical.

“What [Labor] have talked about is ‘in transition’ and in regional areas transition is read as unemployment,” he told the National Press Club in Canberra on Wednesday.

“We have an honourable position and a logical position.”

“We have a safeguard mechanism. It’s like the ceiling … to stop [emissions] going through the roof,” he said.

“[Labor] are going to bring the ceiling down to about head level for tall people and … 215 of them will bolt their heads on the fans and the lights and there will be a new tax placed on them.”

Such a position on coal to retain Nationals seats would not cause the Coalition to lose government, Mr Joyce said.

“We’ve got to make sure our nation earns as much money as possible and you can’t do that if we shut down our coal industry,” he said.

But the Nationals leader knows he, and Prime Minister Scott Morrison, aren’t popular in inner-city electorates and has adapted his pitch to voters, telling them the election isn’t about popularity, it’s about competence.

Mr Joyce has made it a campaign theme to talk about coal and iron ore exports paying for defence spending.

“In the current geopolitical crisis, popularity takes even more of a backseat to competency,” he said.

Mr Joyce also made an announcement about Australia’s sovereign maritime capability, which will be increased to support response efforts during national disasters and crises if the Coalition is re-elected.

The commercial fleet will also be expanded and the Coalition would review tax arrangements, including income tax exemptions, for ship owners to be able to operate on par with foreign counterparts to build supply chain security.

With Nationals and Liberal candidates facing well-funded independents, he said electing such MPs would bring chaos and uncertainty to parliament.

He denied outspoken backbenchers, Coalition members crossing the floor and a failure to pass legislation already constituted a government in turmoil.

“The difference is a Coalition backbencher said they support a Coalition government … giving the prime minister-elect the capacity to go to the governor-general and say, ‘I’ve got the numbers.’ That’s a very big difference.”

Asked whether he would release the confidential Coalition agreement with the Prime Minister if demanded by independents holding the balance of power, Mr Joyce said it must remain secret because he didn’t want to “ventilate every interaction, every nuance day by day within the media”.