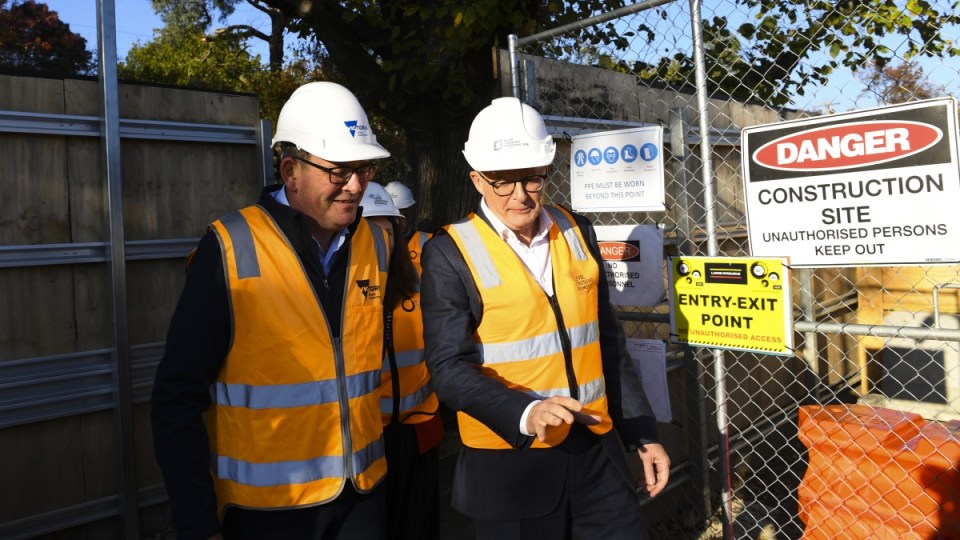 Labor leader Anthony Albanese has backed a 5.1 per cent hike in the minimum wage to keep up with rising inflation.

Mr Albanese’s backing of a higher wage increase came as he campaigned in Melbourne on Tuesday, with Victorian Premier Daniel Andrews for the first time in the election campaign.

During a visit to a worksite in Kooyong – held by Treasurer Josh Frydenberg – Mr Albanese joked he was the only political leader who would be seen in the electorate during the election campaign.

His support for a large boost to the minimum wage followed a submission from the Australian Council of Trade Unions to the Fair Work Commission backing a rise of 5.5 per cent.

While earlier Mr Albanese did not say whether he supported the ACTU’s submissions, he indicated workers should not be left behind by rising living costs.

“You should be able to pay your rent, to buy food, to get by, and the Fair Work Commission should bear that in mind in the decision that they make,” he said in Melbourne.

“Labor has a plan to lift wages and that is what we will do.”

Mr Albanese said the minimum wage should keep up with the cost of living.

It comes as Australia’s inflation levels increased to 5.1 per cent, the highest in two decades.

“We have a government that have low wage growth as a key feature of their economic architecture, they’ve said that.”

Mr Morrison said he supported the current process in setting the minimum wage.

“It is for [the FWC] to consider those issues and make that decision, in the same way it’s for the Reserve Bank to independently make their decision on what’s happening with cash rates,” he said.

“We have always welcomed and accepted the recommendations that have come from that body.”

Mr Morrison also launched an offensive at Mr Albanese on Tuesday, claiming he would be a “pushover” for Labor state leaders seeking funding – prompting a return spray from Mr Andrews.

“That is a ridiculous suggestion that would only be made by a bloke who is so desperate because he’s been there for a decade and done precisely nothing,” the Premier said.

“This is what desperate people who have built nothing and done nothing, got an excuse for everything and a plan for nothing – this is the sort of stuff that comes out of prime ministers who have just run out of time.”

“Every federal dollar that Victorians get from the miserable Morrison government … we ought to bow our head and treat it like it’s foreign aid,” Mr Andrews said.

“I’ve had a conversation with the Prime Minister about this suburban rail loop, and zero dollars. Zero dollars. The contrast could not be clearer. Anthony Albanese is about building things. He’s about partnership. He’s about creating jobs.”

Also on Tuesday, Mr Albanese pledged a federal integrity commission would be one of the first priorities of an incoming Labor government, as Mr Morrison stood by his criticism of the NSW Independent Commission Against Corruption as a “kangaroo court”.

Mr Albanese said a Commonwealth anti-corruption body would be one of the first things addressed should Labor win the May 21 election, along with a reconstruction fund and emissions reduction measures.

“Structures like our measures to deal with reducing emissions, our national reconstruction fund, our anti-corruption commission … I want to really raise the issues of greater gender equality in this country, I see that as a major priority for us,” he said.

Campaigning in the marginal Liberal seat of Bennelong in Sydney on Tuesday, however, Mr Morrison defended his previous criticism of the NSW ICAC and his failure to implement a federal body, despite it being a 2019 campaign promise.

“I stand by everything I said on the matter. I don’t believe the NSW model is a model we should follow at the federal level,” he said.

“I’ve seen it come and destroy people’s reputations and careers before it has even made a finding. I don’t think that’s a good process.”

On the first day of pre-polling on Monday, 309,769 people cast their ballots ahead of the election, according to figures released by the Australian Electoral Commission on Tuesday.

Of the top 10 early voting booths, two were in Queensland while the rest were in Victoria.

Election officials have predicted this year’s election will have the highest pre-poll voting, eclipsing the more than 30 per cent of voters who did so in 2019.

Electoral commissioner Tom Rogers said he was not shocked by the large turnout on day one.

“We were expecting an increase in pre-poll and that’s exactly what we’re seeing at the moment,” he told the Nine Network on Tuesday.

“But the more in envelopes through pre-poll and postal, the harder it will be to determine a result on the night.”

Meanwhile, the Coalition is pitching $5 million in spending to create a “technology skills passport” to help employees get jobs.

The tool would store information about a worker’s experience and education that can be presented to employers.

Albanese’s wages pledge, as he joins Dan Andrews to campaign