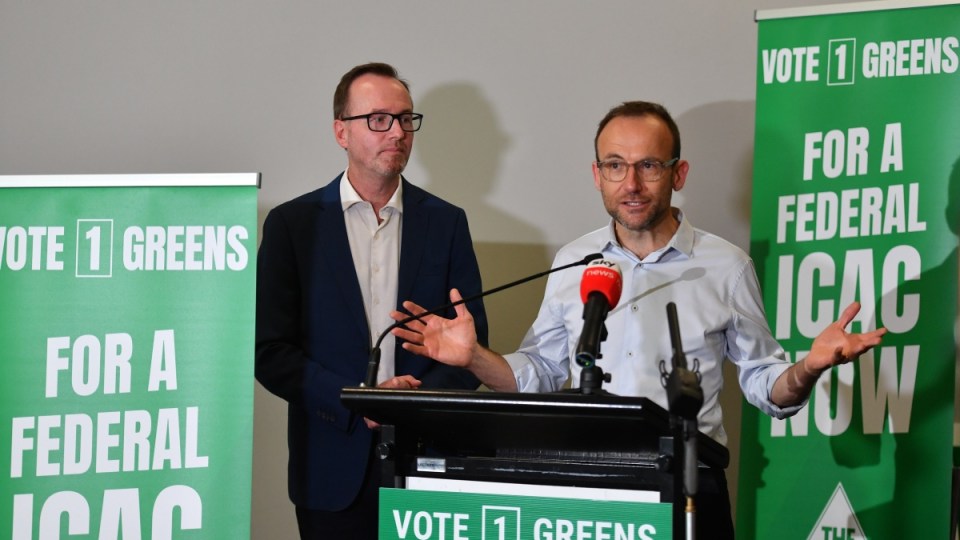 The Greens say federal politics is in dire need of a “clean-up” and pursuing a federal anti-corruption watchdog with teeth will be the party’s top priority in the next parliament.

NSW Senate candidate David Shoebridge, who is looking to switch from state to federal politics, launched the Greens campaign in Sydney on Thursday.

“We’re committing in the first two weeks of the new parliament to bring again the Greens’ national integrity bill … before the next government spends one cent,” Mr Shoebridge said.

“We need to establish a fully empowered … national integrity commission with royal commission powers to hold the former government to account and the future government.”

Morrison shrugs off criticism of misgivings

The promise comes a day after Prime Minister Scott Morrison shrugged off criticisms of his misgivings about a federal body earlier in the week.

Outgoing NSW ICAC Commissioner Stephen Rushton, in a thinly veiled swipe at the PM, labelled critics of the corruption body as “buffoons”.

“I stand by what I’ve said about why I don’t think that model is a good model for the federal jurisdiction,” Mr Morrison said on Wednesday, having previously called the NSW ICAC a “kangaroo court”.

Greens leader Adam Bandt, who has introduced a bill for a federal ICAC in parliament, pointed the finger at the Morrison government for failing to deliver on a federal anti-corruption body.

‘Protection racket for his frontbench’

“Scott Morrison believes that corruption somehow ends at the Canberra border,” he said.

“He needs to stop running this protection racket for his frontbench.”

Mr Shoebridge says his over decade-long experience at the NSW parliament had prepared him well for moving to the Senate.

“In the NSW Upper House we had a complex balance of power … and we used those numbers to establish a parliamentary inquiry which led to a downfall of a Liberal premier,” he told AAP – in reference to former premier Gladys Berejiklian who quit parliament after being told she was being investigated by ICAC.

“That’s one of the essential lessons you take from NSW politics.”

“An ICAC … gives you a place to send the scandals.

Federal politics in dire need of  a ‘clean-up’

“We’ve seen it change premiers … and put former ministers in jail in NSW,” he said, adding that federal politics was in dire need of a “clean-up”.

Both Greens candidates dismissed any competition between them and the so called “teal” independents, in Sydney seats such as Warringah and Wentworth, who are campaigning heavily on their climate-friendly credentials.

“We welcome the entrance of independents into the race … but Greens offer the balance of power in both houses,” Mr Bandt said.

Meanwhile on the north side of Sydney in Warringah, far-right Pauline Hanson’s One Nation candidate Steve Tripp launched his bid for parliament by focusing on local issues,

Alongside state MP Mark Latham, Mr Tripp called for the building of a federally funded bridge to ease congestion on the Spit Bridge.

After 19 seasons, Ellen DeGeneres’ daytime show has come to an end
Treasurer goes head to head with independent challenger in Kooyong
Today's Stories