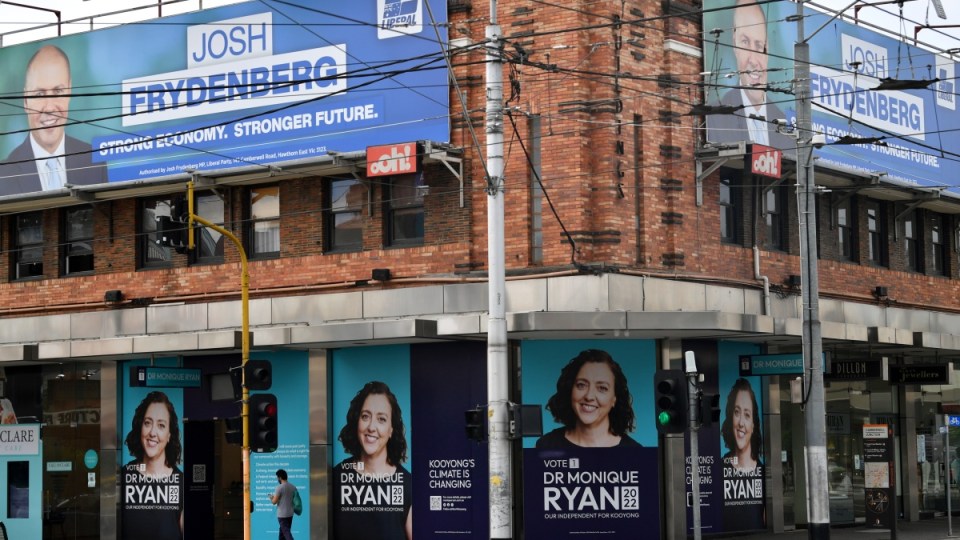 It's a battle royal in Kooyong, where Josh Frydenberg and challenger Monique Ryan are locked in a battle of the billboards. Photo: AAP

Treasurer Josh Frydenberg has moved to head off criticism he has taken his eye off his Melbourne seat – in part by saying his chief opponent’s mother-in-law has told him she will be voting for him.

Opinion polls put Mr Frydenberg in a tough, tight race to retain the formerly blue-ribbon Melbourne seat of Kooyong at the May 21 election amid criticism he has ignored his electorate while dealing with the challenges of his job as Treasurer.

He disputed the accusation at a Sunday rally, saying he had always considered his primary job to be “first and foremost to be a local member” working with local community groups.

“Over the last 12 years, every day I’ve woken up and asked myself, ‘What can I do to support my community?'”

Mr Frydenberg said his “other job” had involved saving Australians’ jobs and keeping the economy on track as the COVID-19 pandemic struck.

‘Running on the Labor Party platform’

The Coalition victories in seven of the past nine elections was not just due to “chance”, he said.

“That is because the Australian people can identify with the values and the philosophies that drive me as the member for Kooyong and drive you as supporters of me – a belief in free enterprise, the power of the individual, free speech, strong national security and support for families.”

Dr Ryan is running on a platform largely based on a call for more ambitious action on climate change and a federal integrity commission.

Despite acknowledging she is a former ALP member, the respected paediatric neurologist says she is running as an independent.

She will debate Mr Frydenberg in a Sky News event on Thursday.