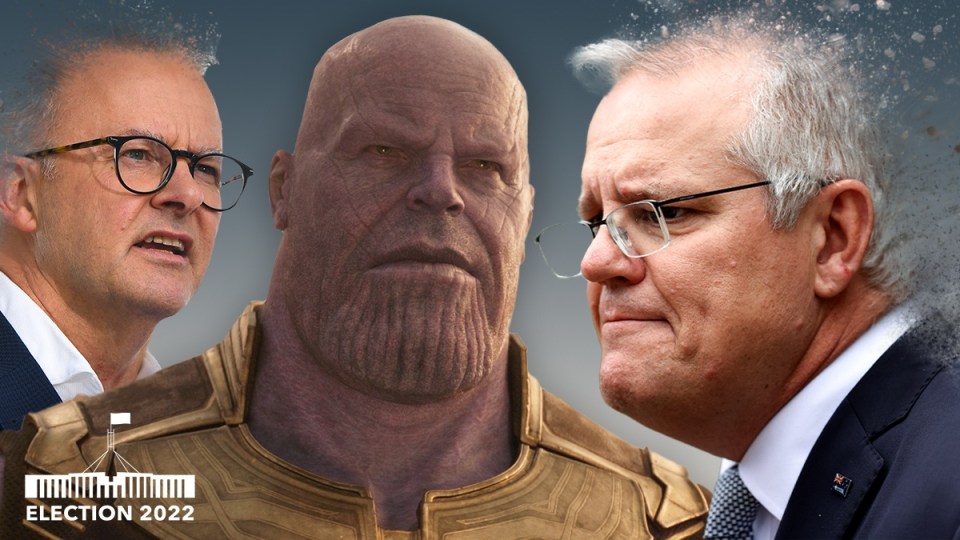 The Labor Party went viral this week with an impressive Avengers-themed TikTok.

That’s a wrap on week three of the election campaign – meaning we have officially reached the halfway mark.

Sadly, that means we only have three more weeks’ worth of spicy election memes to sink our teeth into.

The major parties are still sparring on social media. And yes, the Liberal Party is still relying on Labor leader Anthony Albanese’s Day One gaffe for its meme content.

Let’s get into it.

Prime Minister Scott Morrison narrowly avoided a meme-worthy photo opportunity while campaigning at a factory in Townsville earlier this week, all thanks to some quick thinking.

The safety sign, which read ‘If you mess up, fess up’, was hastily concealed with a safety vest before Mr Morrison passed by.

It seems that the Liberal Party has learnt to be wary of its surroundings while on the campaign trail, avoiding PR disasters such as one former prime minister’s infamous photo shoot outside the Reject Shop.

The phrase ‘fess up’ may be a sensitive spot for Mr Morrison, who was blasted by Mr Albanese just weeks ago for failing to “fess up” to his errors.

Though, it should be noted the Prime Minister’s media adviser told news.com.au they did not ask for the Townsville sign to be covered.

Unfortunately for the Prime Minister, the ‘cover-up’ seems to have only brought more attention to the sign’s contents.

Meme accounts were quick to make the same joke about another of his, uh, alleged messes.

Sometimes these memes really do write themselves.

Tesla CEO Elon Musk made waves this week when he struck a deal to buy Twitter for a cool $61 billion.

What does this have to do with politics, you may be thinking?

Well, the Tesla CEO birthed a new meme template when he so-humbly tweeted about what he planned do next with his remaining $300 billion.

“Next I’m buying Coca-Cola to put the cocaine back in,” he joked.

His tweet was soon adapted by meme aficionados around the world, who substituted Mr Musk’s joke for their own personal wishes.

“Now I’m going to buy all the McDonald’s and fix all of the ice cream machines,” one of the memes read, to which he responded: “Listen, I can’t do miracles ok.”

The Young Liberals quickly got in on the fun, creating their own take.

“Next I’m buying Anthony Albanese and making him learn the unemployment rate,” their meme read.

While the adaption of the meme template is somewhat admirable, we are sure Mr Musk has more important things on his plate.

And yes, three weeks into the campaign, the Liberal Party’s memes are still riding on Mr Albanese’s Day One flub.

We’re in the Endgame now

Although Anthony Albanese’s campaign got off to a rather rough start, it seems he’s now begun to hit his stride.

For a start, he’s out of COVID isolation, back to join the campaign trail. Plus, it seems the Labor Party’s meme game is in fighting form.

This Avengers-themed TikTok posted by the Labor party was one of the week’s best, using the power of deepfake-like technology to insert Mr Morrison and Mr Albanese right into the movie.

The video starts with Mr Morrison as Avengers villain Thanos.

Meanwhile, Mr Albanese takes on the role of Iron Man – there to save the world, of course.

While the ending montage of ‘a better future’ is cheesy for sure, we’re yet to see such impressive video editing from the Coalition.

Another of the biggest stories in politics has been the growing controversy surrounding Liberal candidate for Warringah, Katherine Deves.

Ms Deves, who was hand-picked by the Prime Minister himself to run in the electorate, is facing calls to resign after a series of deleted tweets surfaced exposing her past anti-trans comments.

To make matters worse for her campaign, her cheer club seems to be in trouble, with this lacklustre performance receiving more than 250,000 views on Twitter.

It’s easily one of the funniest moments of the week.

The pandemic has taken its toll on Australian nurses, and now hospitals are scrambling for staff
‘Uproar’: How 6000 of Katherine Deves deleted tweets fractured the Liberal Party
Today's Stories

‘We’re in the Endgame now’: TND reviews the biggest election memes of the week