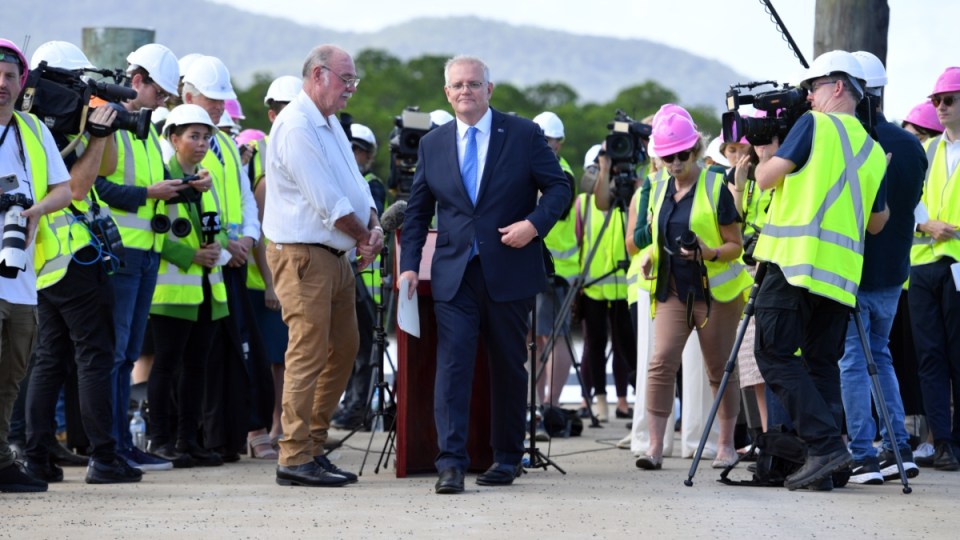 Prime Minister Scott Morrison has dismissed comparisons with John Howard, who lost an election that coincided with an interest rate rise.

Australians are bracing for a potential cash rate rise for the first time since 2007 after the annual inflation rate was revealed to have jumped to 5.1 per cent.

Three of the four big banks predict the Reserve Bank of Australia will raise the cash rate next week.

Campaigning in Queensland on Thursday, Mr Morrison was asked if he would apologise if rates went up, as Mr Howard did when confronted with a mid-campaign rise. But Mr Morrison dismissed the comparisons with 2007, instead blaming other external factors for Australia’s surging inflation

The current cash rate was at a historic low of 0.1 per cent, while in 2007 it was at 6.5 per cent and to draw equivalence between the two time periods was to misunderstand history, he said.

“We’re in the middle of a global pandemic, with a war in Europe. Those situations were not in place in 2007. I think everyone would understand that,” Mr Morrison said in Cairns.

He urged voters to stick with the Coalition as cost of living pressures tightened, and given the uncertain times.

But Labor said the government had been “asleep at the wheel” on inflation.

“When things are going well in the economy, Scott Morrison takes all of the credit but when times are tough for Australians, he takes none of the responsibility and we have seen that again today,” shadow treasurer Jim Chalmers said.

“He wants to talk about international comparisons and international developments – nothing that has happened around the world in the past few months excuses or explains almost a decade now of Coalition attacks on wages and job security.”

Mr Chalmers said the government had “been asleep at the wheel” on inflation and had deliberately targeted wages and working conditions and job security.

Labor’s economic plan, if it wins office, would include an audit of “waste and rorts” as well as crackdowns on multinational companies avoiding tax in a bid to make $5 billion in budget savings.

Opposition Leader Anthony Albanese will return to the campaign trail on Friday, after a week in isolation following his positive COVID-19 test last week.

Mr Morrison took the chance on Thursday to have a dig at Mr Albanese’s “quiet week”.

“I’m looking forward to him rejoining the campaign, he’s had a very quiet week,” he said.

“I remember when I was in iso I had a very busy week.”

Labor frontbenchers continue to campaign in Mr Albanese’s stead, and will be in Sydney on Thursday.

Meanwhile, ABC managing director David Anderson has written to both major parties pitching a leaders’ debate on Monday, May 9.

However, Mr Morrison said he would be available for debates on the Seven and Nine networks, making a total of three encounters including the first with Sky held on April 20.

Labor is still considering its options.