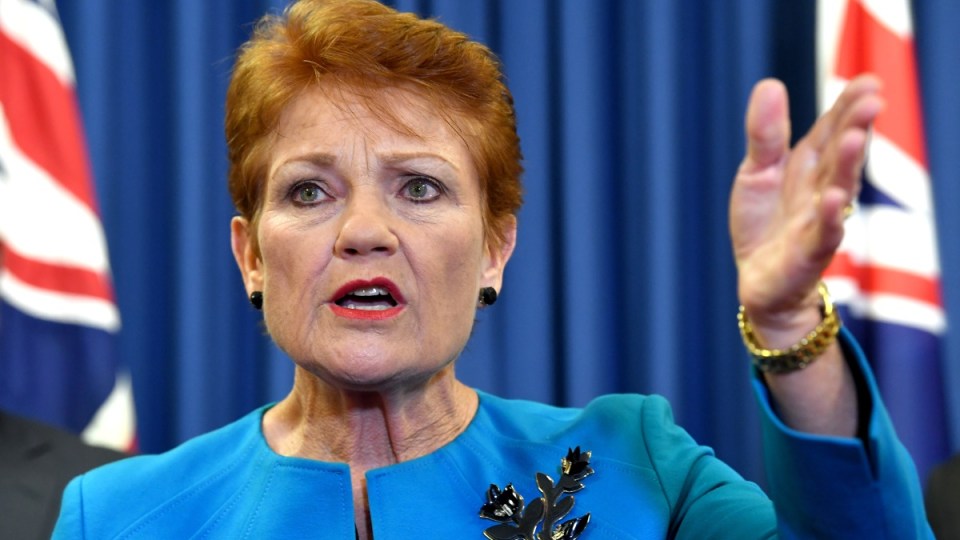 An alleged betrayal of principles is inflaming a war on the right wing of Australian politics with recriminations boiling over into party preference deals in key seats.

One Nation leader Pauline Hanson condemned what she styled as a betrayal of conservative principles after her party lost out when the Tasmanian Liberal party resolved to direct its preferences to the political party founded by Senator Jacqui Lambie.

Ms Hanson said the “dirty deal with the devil” was an unacceptable pact with a “green left” party.

In reprisal she announced a plan to put the Liberals last in several key marginal seats, though exactly which will be targeted is unknown.

A deal to preference Labor above the Coalition could do damage in seats where government MPs are facing challenges but One Nation did not run candidates last election making the importance of its preferences unclear.

But in certain Liberal seats, such as the Tasmanian division of Bass, the most marginal seat in the country held by Bridget Archer, the party’s preferences could be decisive. At the last election a United Australia Party candidate secured just under 5 per cent of the vote, suggesting an appetite for right-leaning parties not equalled in seats such as Melbourme’s Goldstein where the party’s vote was less than half that.

But in a seat such as Bass, currently hanging by 0.4 per cent to the government, an even smaller slice of the vote could change the outcome.

Nationally, One Nation is polling around three to 4.5 per cent, but Queensland specific polling has previously had the far-right minor party primary vote in the low 10s to mid-teens.

On Thursday the Liberal party quietly uploaded how to vote cards for Senate races, revealing it would direct preferences to the UAP everywhere except for Western Australia.

Liberal voters in Victoria and Tasmania will be encouraged to place the UAP second on their ballot paper, third in Queensland and New South Wales and fourth in South Australia.

The minor party’s leader, Craig Kelly, did not respond to questions about whether the party had exchanged any promises or agreements in return for the preference directions. The UAP has campaigned heavily on a slogan of putting the major parties last.

Coalition MPs fighting for their survival in Kooyong and Goldstein would not as normal suggest putting the Greens last but rather the independent candidates part of a movement mounting a challenge to inner-city Liberals.

But it was not immediately apparent how these dealings might affect the outcome of the elections in the seats in question.

“The impact of how to vote cards is exaggerated,” said University of Melbourne statistician Adrian Beaumont.

With the exception of One Nation’s rebuke to the Liberals in key seats, which could hit the Coalition vote slightly, other deals were not likely to be determinative despite catching media attention.

Liberal preferences in Kooyong and Goldstein, for example, will not be distributed making the move some free election PR.

The Coalition’s deal with the UAP, meanwhile, with the low use of how to vote cards in the Senate and a high election quota at 14.8 per cent, is also not likely to do much in isolation but a two-way deal could.

‘Dirty deal with the devil’

Deputy Prime Minister Barnaby Joyce acknowledged the importance of preference flows from One Nation, with LNP members in Queensland relying on them to get over the line.

“The minority (of candidates) actually get past the post on first preferences,” he said.

“So preference deals are inherently important. We rely on One Nation preferences in areas and certainly the Liberal Party relies on us to give them the numbers to be the government.”

Pauline Hanson indicated One Nation would preference Labor over the Liberals in key seats after she accused the government of doing a “dirty deal with the devil” by telling voters to preference the Jacquie Lambie Network in the Tasmanian Senate race.

Senator Hanson said she would look to punish Liberals in marginal seats, particularly in Queensland and Victoria.

In Queensland, more than two-thirds of One Nation preferences flowed to the Coalition.

The party polled above 10 per cent in 14 seats at the last election, 11 in Queensland and two others in the coal mining NSW seats of Hunter and Paterson, which the Nationals are also targeting.

“Preference deals go over such a long period of time. You’re discussing things continually, it doesn’t happen by magic,” he said.

“There’s further information to come on that, particularly in relation to Queensland, there’s different arrangements in different states and territories,” Mr Morrison told reporters in Cairns on Thursday.

“That’s just all politics, what matters is the choice Australians have to make.”

Govt seats at most risk include Bass and Leichhardt

Among the seats most at risk by the preference deal are the Liberal electorates of Bass in Tasmania, held by Bridget Archer by just 0.4 per cent, and Leichhardt in Queensland, held by 4.2 per cent by Warren Entsch.

One Nation is also set to preference Labor over Liberals in inner-city electorates where Coalition candidates are facing challenges from independents, such as Goldstein and North Sydney.

But One Nation says it still plans to support Liberal conservatives and Nationals over ALP candidates.

While One Nation has indicated where its preferences would go to in key seats, it is still only a suggestion to voters ahead of the election.

A study of how to vote card use in 2016 and 2019 showed less than five per cent of One Nation voters followed the party’s card.

Shadow treasurer Jim Chalmers said Labor would not seek to do any preference deals with One Nation.

“We don’t control the preferences that come to us, but we don’t do deals with her,” he said.

Tasmanian independent senator Jacqui Lambie also hit back at One Nation, saying the characterisation of her preference deal as a “deal with the devil” was “the pot calling the kettle black”.

“When you are a mainlander and trying to run a campaign down here, it makes it very difficult,” Senator Lambie told the Nine Network.

“It’s only a two-horse race down here. Pauline has just woken up to that and it’s hit her hard.”