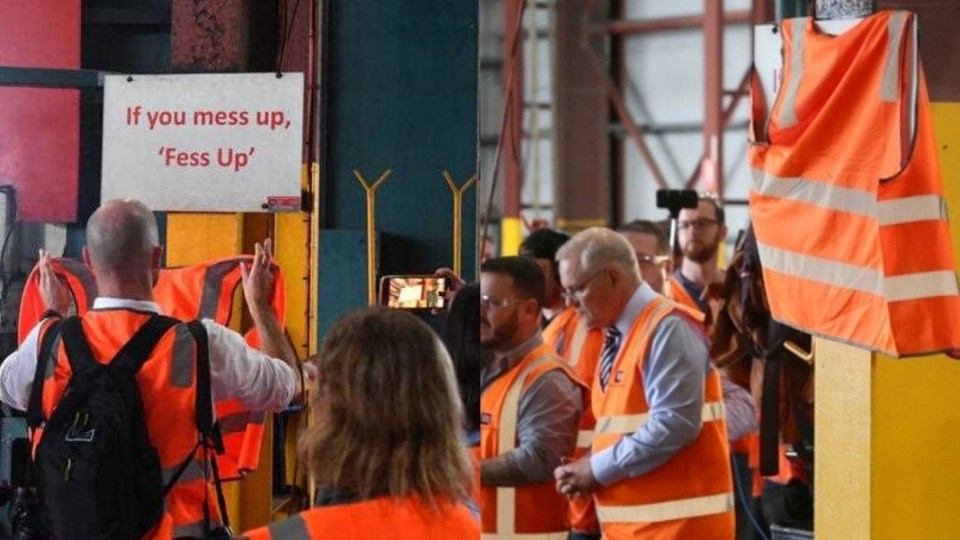 One of the signs is hastily covered at the Townsville factory on Tuesday. Photo: AAP/ABC News

Prime Minister Scott Morrison has narrowly avoided an embarrassing gaffe while campaigning in Townsville – but only thanks to some fast-thinking on a factory floor.

Mr Morrison was in northern Queensland on Tuesday morning, where events included a media briefing at a Townsville engineering business.

With the PM surrounded by a Coalition pack, journalists and workers on the factory floor, ABC photographer Matt Roberts captured the moment a safety sign was covered – just as Mr Morrison was due to wander by.

The sign, which read ‘If you mess up, fess up’, was quickly concealed under a fluorescent vest.

But the cover-up did not escape the eagle eyes of the federal opposition. The ALP almost immediately shared photos of the incident on Twitter, accompanied by the caption ‘REVEALED: @ScottMorrisonMP’s political plan: If you mess up, cover up’.

“Scott Morrison’s approach to leadership: if you see a sign exhorting you to fess up when you mess up, then cover up,” he wrote.

Tuesday’s incident followed the now infamous brain fail by Opposition Leader Anthony Albanese on the first day of election campaigning, when he couldn’t conjure up the national unemployment numbers or the official cash rate.

Later that day, Mr Albanese owned up to his blunder – and seemingly took aim at Mr Morrison for failing to “fess up” to his own errors.

“Earlier today I made a mistake. I’m human. But when I make a mistake, I’ll fess up to it, and I’ll set about correcting that mistake,” he told media.

“I won’t blame someone else, I’ll accept responsibility. That’s what leaders do.”

The Prime Minister’s media adviser told news.com.au they did not ask for the Townsville sign to be covered.

But the quick concealment also follows many calls for Mr Morrison to take accountability for his failures, and those of his government – from his infamous “I don’t hold a hose” comment after his Hawaii holiday trip during the Black Summer fires, to delays over COVID vaccines and tests.

Labor has also taken aim at the Coalition for a lack of clarity on its net-zero emissions pledge, which had been called into question after an LNP candidate described the commitment as ‘not binding’ at the weekend.

Colin Boyce, the candidate for the Queensland seat of Flynn, said the commitment was “flexible” and noted “wiggle room” within it, a view Deputy Prime Minister Barnaby Joyce has described as “completely understandable”.

Labor demanded Mr Morrison clarify the Coalition’s position on climate change, with opposition energy spokesman Chris Bowen saying they “want to be on both sides of the stream”.

“Scott Morrison has a job to do today. Is net zero a firm commitment of the government? Or is it simply a flexible guideline as the candidate for Flynn has said?” Mr Bowen said in Sydney.

Mr Morrison addressed the issue in Townsville on Tuesday, saying Mr Boyce was talking about Australia’s pathway to net zero, rather than the strength of the pledge.

“He wasn’t talking about the commitment itself, he has clarified that … Our commitment to net zero by 2050 is a commitment of the Australian government that I made in Glasgow. It is the government’s absolute policy,” he said.

Labor has pledged a 43 per cent emissions cut by 2030 if it wins the May 21 election. That exceeds the Coalition’s forecast figure of 35 per cent, but falls well short of a 75 per cent pledge by the Greens.