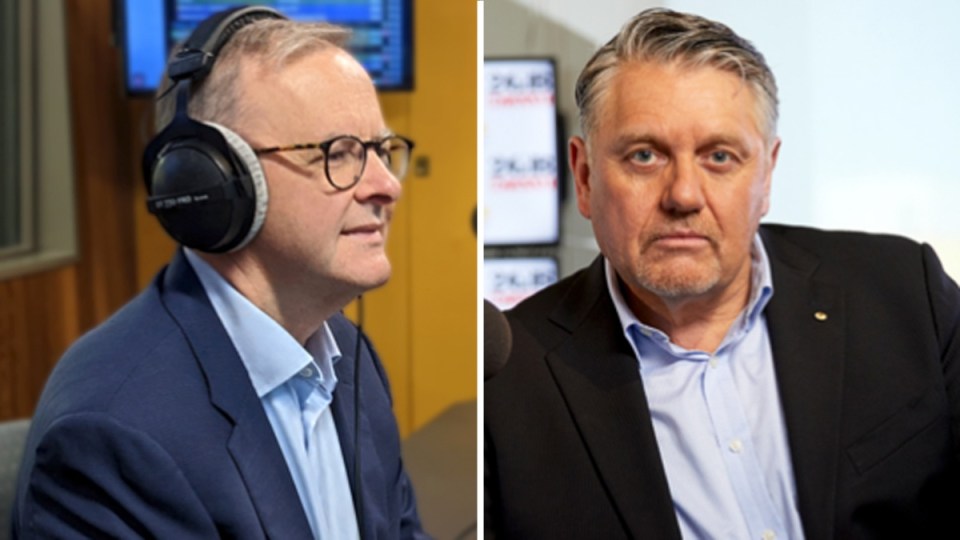 Opposition Leader Anthony Albanese has promised “no carbon tax ever” if Labor wins next month’s election in a bruising encounter with Sydney radio host Ray Hadley.

Speaking from COVID isolation, a croaky-voiced and tired-sounding Mr Albanese endured a half-hour savaging from the 2GB host on a wide range of topics on Tuesday.

Hadley attacked the Labor leader on a wide range of topics, from his campaign opening day jobless rate blunder to boat turnbacks, climate, and a federal integrity commission. There were also questions on engagement with China, and Labor frontbencher Kristina Keneally.

Mr Albanese remained calm throughout the lengthy spray, pledging to have the “same policy” as the Coalition on refugee arrivals by boat.

“The same policy that exists now under Operation Sovereign Borders will apply. Temporary protection visas are for people who have been here prior to 2013,” he said.

A fired-up Hadley snapped back:

“No you won’t, because you won’t have temporary protection visas because you’re terrified of what Kristina Keneally and Penny Wong will do to you if you do have them. You know the only way to stop the boats is to have a three-pronged attack.”

Attacking the Labor leader on climate, Hadley played the audio from former PM Julia Gillard’s infamous “no carbon tax under a government I lead” line, and made Mr Albanese repeat after him: “There will be no carbon tax, ever.”

On the Solomon Islands, Hadley mocked Mr Albanese for suggesting Australia’s lack of action on climate change was one reason for the Pacific nation’s growing relationship with China.

Mr Albanese: “The fact is that we’ve dropped the ball on so many areas.”

Hadley: “Prime Minister Sogavare will be driving around in a Ferrari in some South American country in five years because he’s had his pockets lined by the Chinese. I know you can’t say that, [but] that’s what’s happened. It’s got bugger-all to do with climate change, you know that.”

Mr Albanese: “It has to do with a whole range of issues.”

His comments followed those of former prime minister Malcolm Turnbull, who lashed out at his successor Scott Morrison over the handling of international relations.

‘A hose you have to hold’

Mr Albanese and Mr Turnbull both criticised the government’s decision not to send Foreign Minister Marise Payne to handle the situation in the Solomons, opting instead for Pacific Minister Zed Seselja.

“We need a comprehensive plan of engagement with the Pacific and we simply haven’t had it,” Mr Albanese told Perth radio station 6PR on Tuesday.

“We’ve dropped the ball, and as a result Australia is less secure.”

In an interview on ABC Radio, Mr Turnbull said it was a mistake for Senator Payne not to travel to the Solomons.

“This is a hose you have to hold,” he told ABC Radio.

“[The Australia-Pacific relationship] needs time and attention, you cannot step away from responsibility … the buck stops with the Australian government on this because it’s adverse and contrary to what our policy objectives were.”

Mr Turnbull said the outcome was “an absolute failure” of foreign policy.

Senator Payne said the pandemic had stopped her from travelling but insisted she had still been communicating with her Pacific counterparts.

A visit to the Solomon Islands “may or may not happen” during the election campaign but Australia’s relationship with the nation remained on good terms.

“This is a strong partnership but it does not detract from the fact that governments will, of course, make their own sovereign decisions,” she told ABC Radio.

“It would be naive at best for Australians to operate on the basis that we can march into other people’s countries and dictate and tell them what to do.”

The opposition has sought to boost ties with Pacific nations, on Tuesday announcing a multi-part strategy to improve relations.

Labor foreign affairs spokeswoman Penny Wong said the opposition would always work alongside the US to secure the area.

“The US is the indispensable partner in our region, and the nation when it comes to the security of the Indo-Pacific,” she said in Darwin.

“We can’t simply handball our mistakes to the US. The reality is this is on Australia. The Australian government led by Mr Morrison has left a vacuum.”