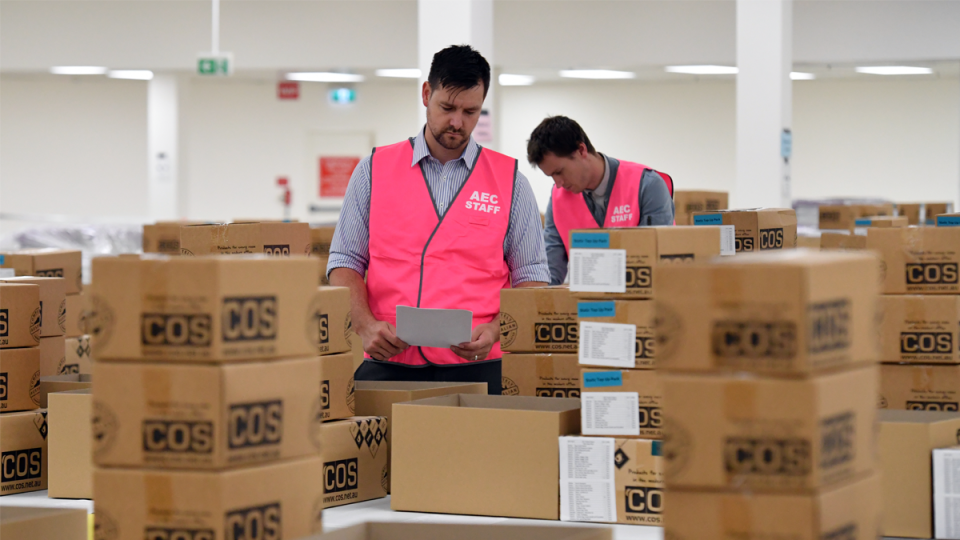 The AEC's Evan Ekin-Smyth inspects voting materials at a warehouse in Queanbeyan, near Canberra. Photo: AAP

Federal elections are the largest peacetime logistical undertakings in Australia, and this year’s will be the biggest and most complex yet.

That should come as no surprise though. Australia’s system of compulsory and preferential voting makes organising elections difficult at the best of times.

But throw in COVID-19 safety considerations and you begin to understand why this election will be the most logistically complex in the country’s history.

“It’s the extreme effort that we go to in a compulsory system that you just don’t see in pretty much anywhere around the world,” said Evan Ekin-Smyth, digital engagement director at the Australian Electoral Commission.

With 96.8 per cent of eligible Australians enrolled to vote, the AEC has to accommodate almost the entire national adult population on one day.

Between elections, the AEC employs about 700 people. But come election day, that figure will jump to 105,000 temporary staff.

“If you look at people, we become one of the nation’s largest employers, if not the largest, albeit for about a single day,” he told TND.

Most of this recruitment has been done already, but there are still some vacancies in regional areas, plus the need for extra staff in case people call in sick or have to isolate on the day.

Then there’s the 8000-odd polling stations being set up, roughly 1000 more than last time in order to keep numbers low indoors.

But the biggest difference between this election and previous votes will be at the ballot box itself.

This time, due to COVID-19 safety concerns, the AEC has bought 4.5 million pencils which will be cleaned between use.

On the topic of cleaning, the AEC has also stocked up on 63,000 litres of hand sanitiser and 34,000 litres of disinfectant spray for the big day.

That’s not to mention all the warehouses and transportation needed to get these things to every corner of the country by May 21.

One reason for the redesign is so they can be sanitised periodically.

“Because if you spray and wipe a cardboard voting screen, it gets soggy and not very useful pretty quickly, so we now have plastic inserts that you can spray and wipe,” Mr Ekin-Smyth said.

“And even funny decisions like that we don’t take lightly. We tested how much you can spray and wipe a cardboard voting screen – it didn’t work.”

The new voting booths will also be more environmentally friendly than the last ones.

The cardboard was previously bleached white and marked with the purple AEC branding, but the new booths will be a more natural shade of brown.

This also means that they can be reused at state elections by electoral authorities around the country.

It’s also the AEC’s job to make sure voting is accessible for all Australians.

Blind people, for example, are able to vote over the phone.

This service is also being extended to people who are isolating with COVID-19, as well as voters at Australia’s Antarctic bases.

Meanwhile, at least one polling station in each electorate will have electronic pen-shaped devices that read aloud printed text.

These will be provided to people who might need assistance in reading their ballots.

Some polling stations will also have quiet spaces to cater for autistic people who might prefer a less stimulating environment.

The AEC also aims for voting locations to be physically accessible, and has provided portable ramps for those that are not.

For remote, predominately-Indigenous communities, AEC staff will arrive by plane, helicopter, 4WD or boat to set up a temporary polling station.

It’s a far cry from the days when Aboriginal and Torres Strait Islander people weren’t allowed to vote.

Staff are currently visiting these communities to discuss the date and time with them.

Behind the scenes of the federal election: Australia’s biggest ever peacetime logistical effort