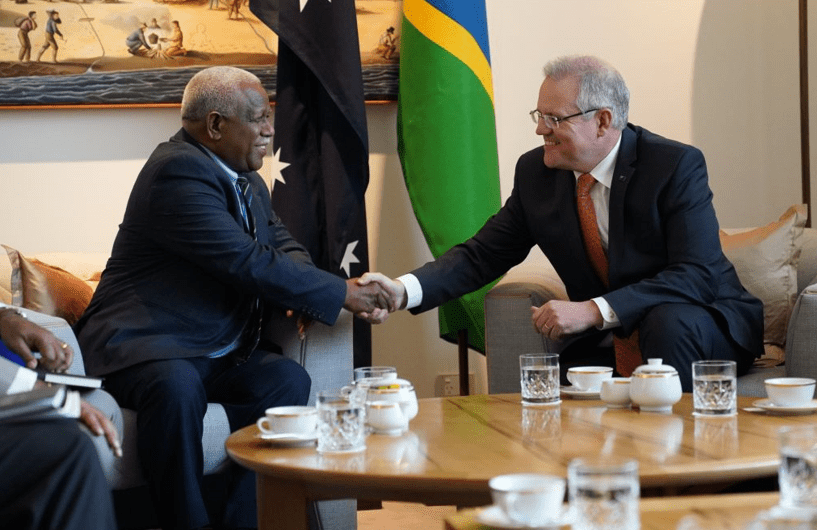 Flashback: Scott Morrison made the Solomons his first post-election stop in 2019, when he was praising China's influence in the Pacific. Photo: Getty

Labor says Australia is “less safe” after the Solomon Islands turned to Beijing and agreed to a security deal that could enable China to station its military in the Pacific.

The Morrison government has refused to reveal what it did to try and stop the pact and on Saturday the Prime Minister would not answer national security questions on the campaign trail.

Deputy Labor leader Richard Marles said the Solomons agreement was a “watershed moment” in national security that the Federal Government had missed.

“They have let the Pacific go. Under their watch, they have made it so that Australia is not the partner of choice for the Solomon Islands,” Mr Marles said.

“And by virtue of that, our security is much worse than it would otherwise have been.

“It definitely raises the increased prospect of Chinese military presence in the Pacific and that makes Australia less safe.”

Mr Marles was also questioned about his own relationship with China and why he provided a copy of his speech to the Chinese government when visiting the country in 2019.

The federal government won’t say when it became aware of the draft agreement between China and the Solomon Islands after reports Australian intelligence agencies were involved in its leaking.

An Australian intelligence agency was aware of the pact days ahead of it being made public in March and played a role in leaking the text onto social media, according to Nine newspapers quoting government and security sources.

The claim brings into question comments by Foreign Minister Marise Payne, who told Senate Estimates she only became aware of the draft agreement after it leaked online.

Prime Minister Scott Morrison maintains the government has “always been aware of the risks of an agreement like this”.

“I have known for some time the risk of a deal such as this coming about. This is why the first place I went to after the last election (in 2019) was the Solomon Islands,” he told reporters on Thursday.

“We’ve been aware of the Chinese seeking to obtain an agreement like this, as they have been in Papua New Guinea and other countries in the Pacific, as they have done in African countries.”

On Saturday, Treasurer Josh Frydenberg hit back at criticism his government was too slow to act, saying he wouldn’t take lectures from Labor after Mr Marles encouraged Chinese investment in the region.

“(Mr Marles) said he would encourage China’s engagement in the Pacific, he dismissed any strategic concerns, he welcomed more financial assistance from China into the Pacific,” he told the ABC.

“We won’t take a lecture from the Labor Party on this very important issue.”

But comments by Mr Morrison featuring similar language in an address to the University of Melbourne in 2019 have also resurfaced.

“The infrastructure needs of the region are enormous and Australia welcomes the contribution that the Belt and Road Initiative can make to regional investment and to regional development.”

It comes as a senior US delegation including President Joe Biden’s top Indo-Pacific security advisor, Kurt Campbell, held talks with Solomon Islands leaders to express concerns over Chinese influence in the region.

The delegation met with Prime Minister Manasseh Sogavare along with two dozen members of his cabinet and senior staff for 90 minutes as well as prominent religious leaders on the island and key members of the political opposition.

US will ‘respond accordingly’

A White House readout of the delegation’s travel to Fiji, Papua New Guinea and the Solomon Islands said the US “noted there are potential regional security implications” of the security agreement.

The US says it will “respond accordingly” if any steps are taken to establish a de facto permanent military presence, power-projection capabilities, or a military installation.

Senior Labor MP Tanya Plibersek welcomed the White House’s commitment to expedite the opening of its embassy in Honiara.

“The fact that the US Embassy has been closed in the Solomons for some time is perhaps something to be remedied now,” she told the ABC.