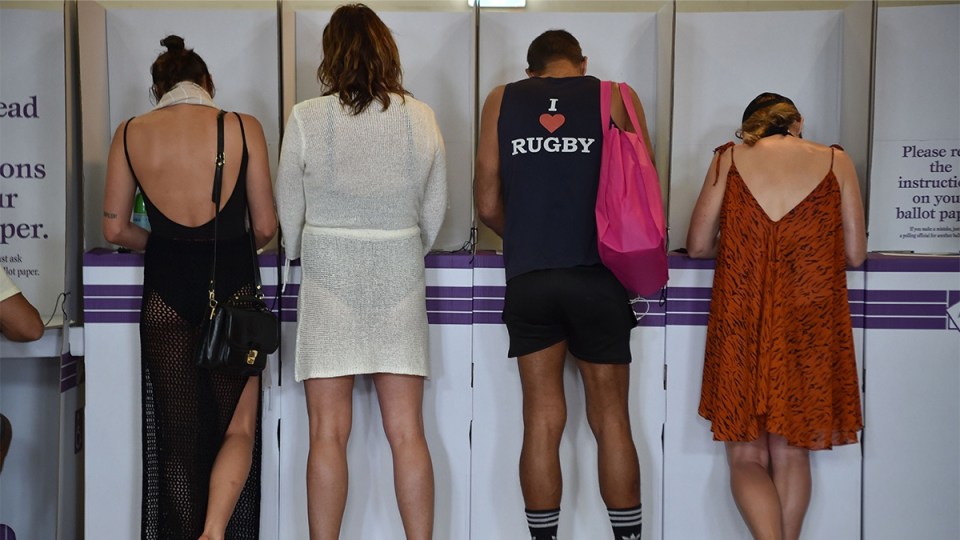 Young voters had until Monday night to enrol to vote, with the election set for May 21. Photo: Getty

An influx of young, first-time voters are set to make their voices heard on May 21 – and politicians have started courting their votes.

Despite talk of a “youthquake”, the percentage of enrolled voters aged 18 to 24 remains steady at 88.1 per cent.

But what separates these voters from the 96.5 per cent of enrolled voters across the general population is a sense of urgency about specific issues.

“Unsurprisingly, young people are very interested in their future,” said Tom Crowley, a journalist at the youth-oriented, Instagram-based news outlet The Daily Aus.

“And I get the sense that they’re frustrated at the lack of conversation about the future.”

This month, Crowley conducted a survey of more than 1500 young people to find out what issues mattered to them before the federal election.

“The overwhelming winner was climate change,” he told TND.

Other stand-out issues were housing affordability and the cost of living.

At the last federal election, ANU’s Australian Election Study found the Coalition received its lowest-ever share of the under-35 vote, and The Greens their highest-ever share.

But no matter which way young voters might skew, politicians shouldn’t write them off as a whole.

Dr Ghazarian said that, much like the rest of the population, young voters are motived by a variety of factors including their personal values or family voting pattern. Sometimes their vote is decided at random.

“Where there have been some gaps, and what young people have told us, is their confidence and knowledge to cast a vote with confidence,” Dr Ghazarian said.

“I think that’s something that the Electoral Commission and schools are all playing a role in strengthening.

“But obviously, from the young people that we’ve spoken to, we can still do more.”

To reach young people, politicians, parties and even electoral authorities must turn to the internet.

The Australian Electoral Commission has embraced social media to reach the incoming cohort of first-time voters.

Most prominent is the AEC’s official Twitter account, which has quickly gained a reputation for swiftly – and sometimes humorously – debunking misinformation and answering ordinary Australians’ questions about the electoral process.

Twitter even promoted the hashtag #MyFirstDemocracySausage with the AEC’s blessing to encourage first-time voters to share their experiences.

The AEC is reaching an even younger audience on Snapchat, where the organisation has released a series of lenses, stickers and a quiz for users to test each other.

But for politicians and candidates, the potential pitfalls of pandering to the youth online are numerous.

A poll of 2344 Australians conducted by YouGov found that 80 per cent of young people would be discouraged from voting for a candidate who spread misinformation online.

Meanwhile, 53 per cent would be discouraged from voting for a candidate who engaged in “online fights”.

For candidates who have a penchant for slamming opponents or engaging with trolls, this could be a problem.

“The public conversation on Twitter is more important than ever during elections, with research showing more than one-third of young Australians will get the majority of their political information from social media during the election campaign,” Twitter’s Australia and New Zealand public policy director Kara Hinesley said.

Youth enrolment has remained high since the last election, and politicians need to pay attention