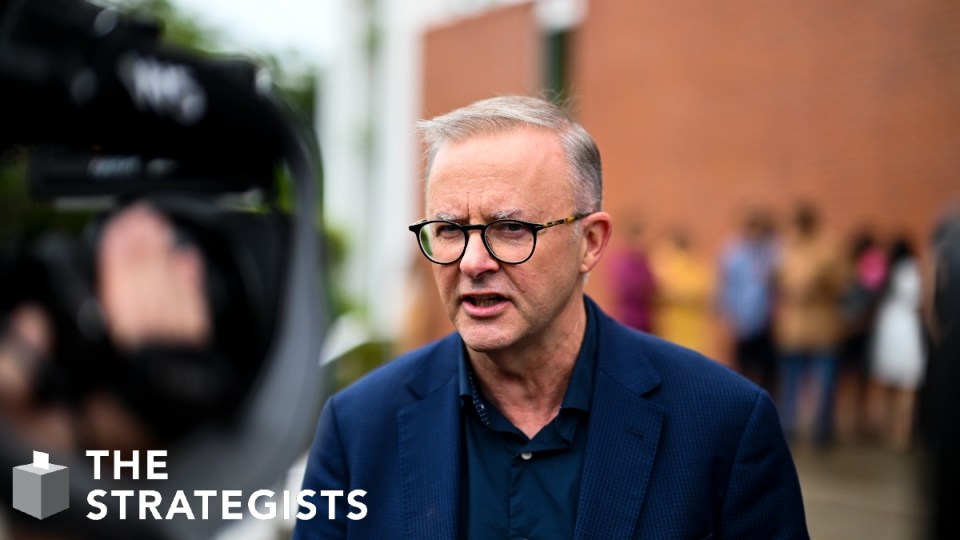 The start to a gruelling election had been much anticipated during weeks of undeclared prelude.

But as soon as it was upon us, many political journalists seemed ready to declare Anthony Albanese out for the count after the briefest of exchanges.

Yet five weeks still remain, with many gambits not yet tried and quizzes not yet popped.

To help us make sense of it all, two campaign trail veterans, one from each side of politics, will be sharing with us weekly insights on whom and what to watch.

Who looks the better campaigner? Why?

At the top of their game, Anthony Albanese and Scott Morrison are formidable political adversaries. Both are street-smart, fearless and have tactical nous.

Albanese has just had a week he would rather forget, but Morrison has three years of policy failures, botched rollouts and dodgy deals as election baggage.

Morrison, in particular, likes to define himself by talking down his opponent and Albanese’s small target strategy has clearly frustrated the PM over the past three years. But we are now in the campaign proper and Morrison has some useful ammunition.

We know Morrison can stand up in the big matches and relishes the contest; Albanese has to prove he wants the job.

It is easier said than done, but Albanese needs to keep his cool and stay unflustered. Early voting is still several weeks away, let alone election day.

Anthony Albanese’s failure to name key economic figures dogged him all week. How can he change the conversation?

COVID and the national cabinet have meant that opposition leaders across the country have struggled to lift their profile over the past couple of years.

If anything, the danger was to fly off the handle with excessive or unfounded criticism and Albanese hasn’t fallen into that trap.

This means that last week’s missteps might be the first time some undecided voters have taken a closer look at Labor: The polling suggests that their eyes are open, not that their minds are closed.

Labor has a significant opportunity to detail a positive vision for the future. That is how Labor wins government from Opposition.

Albanese has to convince voters he has the plan and expertise to deliver it.

The momentum will inevitably shift several times over the course of the campaign, but I think Albanese needs to stay firmly in the positive and let others provide any negative commentary on the Prime Minister or the government.

Does Scott Morrison change tack this week? What is his strategy?

Scott Morrison will continue to point out what he sees as Labor’s shortcomings: Employment, the economy, defence or national security, all of which are strong suits of the Coalition.

He will provide positive plans and announcements, but the undercurrent throughout will be that you cannot trust Labor.

What’s a piece of campaign advice you’ve received that one of the leaders needs now?

An election campaign is a marathon, not a sprint. Labor was in a strong position heading into the campaign and will recover momentum, but Albanese can’t rest on his laurels.

To use another cliche, fortune favours the brave and voters want to be convinced that Albanese holds the keys to a better future.

This election remains a great opportunity for Albanese against a government that will end up with more than a decade in power if it wins. A lot of voters aren’t convinced that they deserve it.

Darrin Barnett was previously press secretary to Prime Minister Julia Gillard, Labor campaign strategist on multiple state and federal elections, director of Kerryn Phelps’ campaigns in Wentworth and consultant to Zali Steggall’s win in Warringah. He is currently a fellow at the McKell Institute and a director at PremierNational.

Who looks the better campaigner? Why?

Australia has not seen a formidable prime minister who understands the Australian people like Scott Morrison since John Howard. So when initial polling indicated Labor was ahead at the start of the campaign and the tide was turning, it was Anthony Albanese’s election to lose and his first week of campaigning has been one to forget.

The first week has shown Albanese is an inner-city campaigner bound by left-wing ideologies which he has for so long championed. This view doesn’t play well to the suburbs or the regions.

Albanese tried to pivot to a more centrist position last week by talking about issues like immigration and the economy, to only contradict himself later when the left of his party reminded him that he is ultimately one of them and needs to toe the line.

Morrison hasn’t hit his stride yet, so unless Albanese’s left can give him some free rein to win the hearts and minds of the ‘Quiet Australians’, it’s not likely the Morrisons will be leaving the Lodge.

Anthony Albanese’s failure to name key economic figures dogged him all week. How can he change the conversation?

For the Leader of the Opposition not to know the cash rate or the unemployment rate on the first week of campaigning is unforgivable, given that the cost of living will be one of two key issues on which the election is fought.

The other will be national security, with leaders required to assure voters that the war in Europe won’t spread to Asia and the Pacific.

Against this background, the Coalition have been seeking to frame Albanese as a politician who doesn’t understand economics or national security, and the Opposition Leader’s poor answers on economics and immigration last week proved their point.

Albanese is now on the back foot and will have to shift the public conversation to aged care, health and education to turn his election around.

Does Scott Morrison change tack this week? What is his strategy?

Last week the message was all about presenting Australians with “choices”.

The Coalition will now continue to frame Albanese as a “weak” leader, therefore the Coalition message will likely leverage this and focus on a “strong economy” and a “stronger future”, post COVID.

What’s a piece of campaign advice you’ve received that one of the leaders needs now?

Anthony Albanese should be reminded that the average voter doesn’t care about politics in Canberra; they want to know what it all means for them and their family.

Scott Morrison visited the NSW south coast last week and voters there were still angry about the bushfire response from the Coalition federal and NSW governments.

Albanese got caught in his own political quagmire of internal politics and this was seen by the public.

By Morrison taking this issue head on in the first week, he showed leadership. By Albanese tripping over his own policies, he showed he is not ready to be Prime Minister.

In my experience, voter’s minds won’t be made up until the last few weeks of the election when pre-poll booths open, but Albanese’s poor start is likely to weigh heavily on voters’ minds when trying to decide who will lead the country in a post-COVID environment.

Triple the romance: Can casting three men in The Bachelor breathe new life into the franchise?
Paul Bongiorno: Not being Scott Morrison is Anthony Albanese’s best shot
Today's Stories

The Strategists: A view of week two of the election campaign