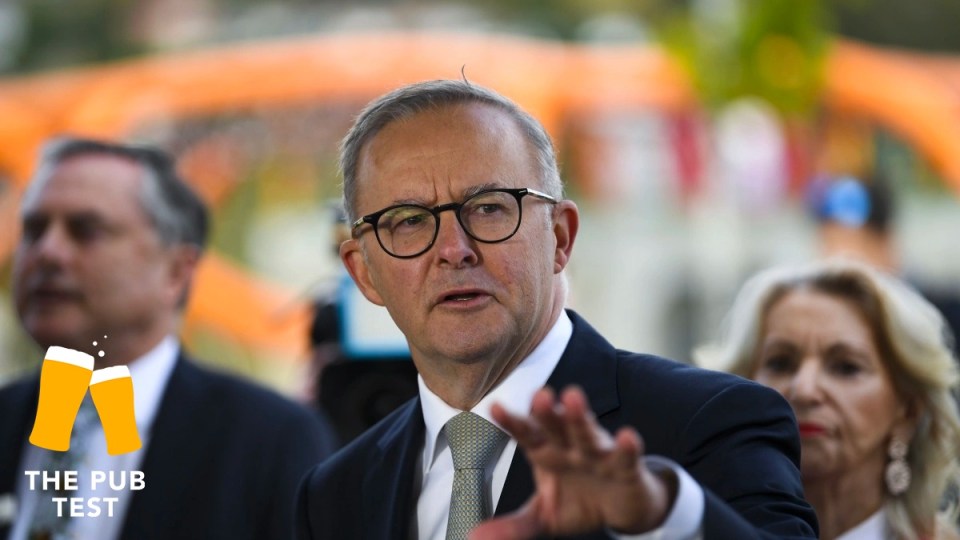 The New Daily visited the Half Moon pub in Brighton this week to see if the Opposition Leader passed the pub test. Photo: TND

The Victorian electorate of Goldstein is shaping up to be a key battleground for the Coalition on May 21.

Held by Liberal MP Tim Wilson, the affluent electorate runs along Port Phillip Bay from Elsternwick to Beaumaris and is home to almost 150,000 people.

It has been held by male conservative MPs since Federation 121 years ago.

But this election poses a new challenge for the Liberals.

Former ABC correspondent and TND columnist Zoe Daniel is running as an independent and is promising greater action on climate change, tougher scrutiny of government corruption, and safer workplaces for women – three areas that have emerged as major weaknesses for the Coalition during its nine years in office and that also resonate with ‘small-l’ liberals commonly found in Goldstein.

And so while Mr Wilson holds the seat on a hefty margin of 7.8 per cent, The New Daily has chosen the seat of Goldstein for its first weekly pub test because of the fresh competition from Ms Daniel.

Each week until election day, we’ll be visiting pubs in key electoral battlegrounds to ask locals for their opinions on a major event that happened that week.

On Wednesday evening, TND visited the Half Moon pub in the Liberal stronghold of Brighton and asked seven patrons the following question:

Mr Albanese said he made a mistake and took ownership for it. Several of his colleagues defended him by saying it was nothing more than a lapse in memory, and bore no reflection on his competency as a leader, or his credentials as a future economic manager.

Does their defence pass the pub test?

“He’s the Leader of the Opposition. He should have known.

“He really should have studied that before he came out.

“I work at a school, and if the principal came in and didn’t know some of the figures – didn’t know how many kids we had, or what money we were making – I would be horrified.

“It makes me worry that he’s going to try and run the country, [because] it’s a big job.”

“It was a pretty poor slip-up on the first day.

“The interest rate has been consistent for quite a while so the fact he didn’t know that was pretty bad.

“They are two basic figures to know. They weren’t really in-depth questions. They are common knowledge for anyone who sort of follows politics and the economy.”

“There are other things happening and you can’t expect them to deal with everything.”

TND: Do you think it says anything about whether he can be a good prime minister?

“No. It’s just one [mistake]. You’ve got to get a collection of a lot of [mistakes], spread over a lot of issues that he doesn’t know about, and then I’ll be concerned.

“If you ask one question [and he gets it wrong], it’s not important.”

“I get that sometimes people get mixed up and forget. But the figures have been bandied around in Parliament. They are raised almost every day in Parliament. So he’s either not listening or not paying attention, because they’re pretty straightforward.

“I think it’s particularly bad when the Labor Party have been traditionally hammered for not being good economic managers … it just gave such a free hit to the Liberal Party on the very first morning of the campaign.”

TND: What does it say about his competency as a potential prime minister?

“Not much, to be honest. I think that you can get muddled up, you can make a mistake, and still be a competent and decent leader. So I don’t think it says a lot, but I don’t think it’s helped him.”

Jenny: “I think if he wants to be Prime Minister, then he needs to have a handle on what the rates are.

“I get that numbers change. But I guess, in general, I have lost confidence in him anyway, so any little mistake he makes now, to me, is like, ‘[here’s] another one’.”

Alan: “My opinion of him is that he’s never held a portfolio of any substance – he’s a lightweight.

“I think the Labor Party hasn’t been the Labor Party for 50 years. These people like Albanese and [Bill] Shorten are elitists who espouse working-class values. There’s no substance to it. It’s all bulls–t.

“To me, they’re literally communists.

“Albanese is just a faux-Shorten. All they’ve done is taken this person over here … and just jam him in here because he’s a different face. But if they get elected, I almost guarantee they’ll flick back.”

“I think it unmasked him.

“Those two numbers are significant. Just days before, he was telling us he was an economics man, he’s done his economics degree at university as a teenager … but then he didn’t know the unemployment rate.

“What was he doing when the budget was being delivered, and they were running through all the numbers, and Josh [Frydenberg] was ‘bla, bla’ and telling all the stories. What was he doing? Daydreaming? Not listening?

“It is simply not acceptable for the future prime minister not to know those two numbers.”

But the Opposition Leader no doubt hopes he can “shake it off” well before the polls.

Next week, we’ll be visiting a marginal seat in Sydney.