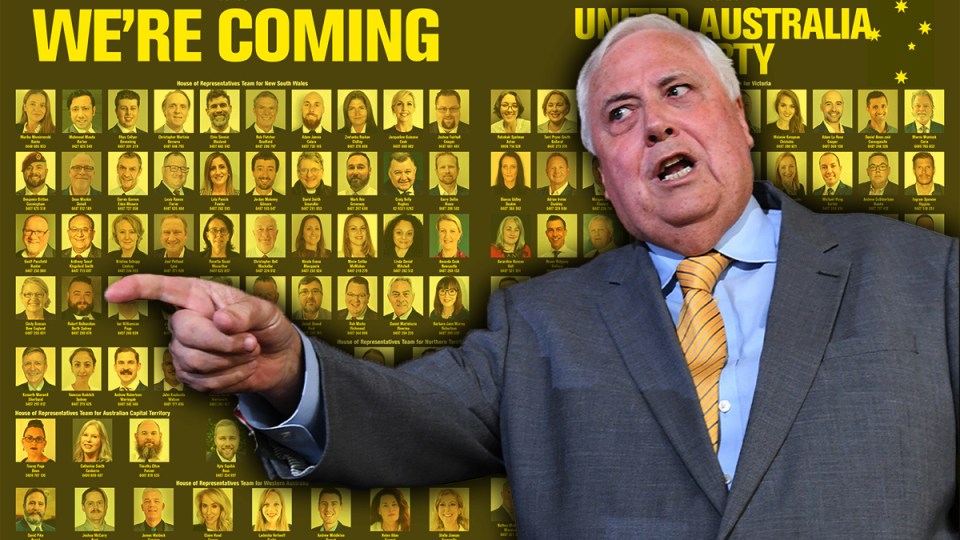 Clive Palmer will run candidates in every electorate. Photo: TND

Clive Palmer’s United Australia Party will run candidates in every electorate at the federal election, and the list of hopefuls is full of anti-vaccination and anti-lockdown campaigners.

The candidates were announced by Liberal defector Craig Kelly, who took the unusual step of referring to Mr Palmer as the minor party’s “shadow treasurer”.

As part of the announcement, the party took out double-page advertisements in several newspapers which read: “We’re coming”.

Some of the candidates are Palmer loyalists who previously ran under the yellow banner before the election.

But the vast majority are people who are active in the anti-vax or anti-lockdown movements.

It follows the announcement of the UAP’s Senate ticket, which similarly includes anti-vaxxers, plus several of Mr Palmer’s business associates.

The UAP’s candidate in Aston is Rebekah Spelman, an anti-lockdown campaigner who spoke at a large rally in Melbourne last year.

“Jail Dan Andrews! I want to say hang Dan Andrews, but I know that’s not allowed,” she was recorded saying.

In 2015, as a councillor in Frankston, Ms Spelman was also criticised for attending an anti-immigration Reclaim Australia rally.

Reid candidate Jamal Daoud has consistently attended protests such as the anti-lockdown rally in July after which he was visited by police and has more recently been uploading videos from the Convoy to Canberra protest.

In 2013 he was punched in the face on Today Tonight during a segment about Sunni Muslims against Shiite shop owners in response to the Syrian uprising.

Meanwhile, Eden-Monaro candidate Darren Garnon held a meet and greet to coincide with the January 22 anti-vaccine rallies around the world.

The event was supported by Reignite Democracy Australia.

Several lawyers who have launched legal challenges against state government vaccine mandates have thrown their support behind Mr Palmer and the UAP.

Sydney barrister Mahmoud Mando is the party’s candidate in Barton.

During the 2021 Delta outbreak, Mr Mando criticised a New South Wales government requirement that construction workers from the eight Western Sydney LGAs of concern be vaccinated.

Mr Mando told The Daily Telegraph that the rules were “unconstitutional” and “discriminatory”.

The UAP’s candidate for Werriwa, in Sydney’s west, is solicitor Tony Nikolic.

The case was ultimately thrown out.

In Queensland, Bowman candidate and healthcare worker Mary-Jane Stevens joined a legal challenge against vaccine mandates in her field of work.

Mr Palmer’s anti-lockdown and anti-vaccine mandate messaging has attracted many prominent people from these circles.

The UAP candidate for Paterson is Jason Olbourne.

Mr Olbourne is a father who founded a group called A Million Mums for Informed Consent, which protests against widespread COVID-19 vaccinations.

The father also runs an website called World Series News Underground TV, which revolves around conspiracy theories such as The Great Reset.

In 2020 he was banned from Facebook “for telling too much truth”, according to an associate.

One of his guests to discuss the Convoy to Canberra protest was fellow UAP candidate Geoff Passfield, who criticised vaccine mandates.

Another online pandemic pundit is Flinders candidate Morgan Jones, who hosts his online commentary channel urging people not to get tested for COVID-19.

“If there’s a silver lining to COVID-19, it’s that the world finally recognises China for the global enemy it is,” he posted early on in the pandemic.

Robertson candidate Barbara-Jane Murray appeared on a podcast where she said she doesn’t watch much TV, but would like to report a certain doctor who appeared in the Australian vaccination commercials “to make her pay for her crimes”.

A few months earlier, he called vaccine mandates “coercion” and “discrimination” in a post on LinkedIn.

Mr Sinosic has been criticising COVID-19 vaccines and lockdowns on Twitter since at least 2021.

In the electorate of Nicholls in rural Victoria, the UAP is running Dr Robert Peterson, a retired GP from Seymour who opposes mRNA vaccines like Pfizer and Moderna, as well as vaccines in general.

He said he supports the Novavax vaccine instead.

A fringe movement has emerged in favour of this vaccine instead of other options because it uses more traditional protein subunit technology.

A handful of religious leaders are running as UAP candidates, reflecting the religious influence seen at recent anti-lockdown and anti-vaccine mandate protests.

Macarthur candidate Rosetta Sicari is an elder of the Echo Church that signed an open letter by Reignite Democracy Australia urging the government to scrap vaccine requirements on religious grounds.

The UAP candidate in Corangamite, Daniel Abou-zeid, is the lead pastor at Elevate Church Torquay.

Meanwhile, homeschool mother Gerardine Hansen is running as the UAP candidate in Holt.

Some of the UAP’s lower house candidates defy categorisation but are notable nonetheless.

Cunningham candidate Benjamin Britton was criticised by independent military watchdog, the Australian Defence Association, for wearing an old Australian military beret in his only candidate photo.

The ADA said the use of military uniforms in campaign material threatens the political independence of Australia’s armed forces.

The party’s candidate in Dobell, on the NSW Central Coast, is talk radio host Dean Mackin.

Mr Mackin was fired from 2SM in 2019 because management found his conservative commentary to be “very unbalanced”.

However, he later returned to the airwaves to fill in during the holiday period.

In Bob Katter’s electorate of Kennedy in Queensland, the UAP is running Peter Campion – the father of Barnaby Joyce’s partner Vikki Campion.

But perhaps the most prominent of all the UAP candidates is Dean Vegas, an Elvis impersonator running in Moncrieff who describes himself as “PROUD 2 B VACCINE FREE”.

In 2016, the Pharmacy Guild of Australia enlisted Mr Dean as its “only official Elvis marriage celebrant” to wed couples at its annual conference.