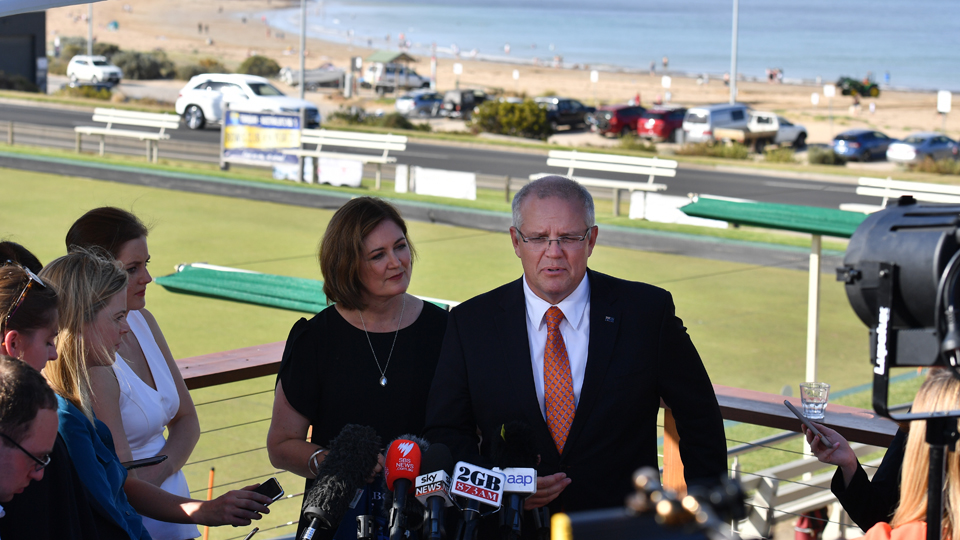 Sarah Henderson and Scott Morrison campaign in Torquay in May 2019. Photo: AAP

Anthony Albanese has labelled a $150 million program that pumped money into swimming pools in marginal Coalition seats as “sports rorts on steroids”.

The ABC revealed on Friday that the vast majority of funding went to 11 swimming pools in Coalition seats ahead of the 2019 federal election.

In fact, $60 million – or 40 per cent of the available funding – went to just two Liberal-held seats: the ultra-marginal Corangamite, which the Liberal Party ultimately lost to Labor, and Attorney-General Christian Porter’s marginal Western Australian seat of Pearce.

“What we’ve seen here is a program with no guidelines, $150 million of taxpayers’ money abused for political purposes, where the only guidelines were the electoral map and the political interests of the government,” the Opposition Leader said on Friday.

A spokesman for Prime Minister Scott Morrison said the so-called Female Facilities and Water Safety Stream delivered on election promises, and funding and contractual arrangements were still being finalised with program participants.

As well, Labor announced at least $250 million in community and sport projects during the campaign, the spokesman said.

The ABC’s investigation into the program comes after former sports minister Bridget McKenzie was forced to resign from the Coalition front bench after weeks of uproar over her handling of a $100 million sports grants program.

It was also revealed last month that during the last federal election, almost half of the councils the Morrison government said would be eligible for a $1 million drought grant did not meet funding criteria.

The FFWSS was originally pitched as a merit-based sports grant program for local clubs that needed to upgrade facilities to attract women.

“The principal objective of that is to ensure that there are changing facilities and other facilities to support more girls and women’s participation in sport all around the country,” Mr Morrison said at its March launch.

Later in the election campaign, Senator McKenzie – then sports minister – spoke of the need for women’s sport facilities and said the government had found “an additional $150 million specifically for female change rooms in response to this need”.

However, $120 million of the FFWSS program was allocated to 14 pools, all in seats held by the Coalition at the time of the 2019 election.

In the marginal Victorian seat of Corangamite, the local council found out it would get $20 million to build an Olympic-sized pool after the announcement was published in a local newspaper four weeks before the election.

A further $10 million was committed to a second aquatic centre in the electorate, then held by the Liberals’ Sarah Henderson by just a handful of votes.

“If it was not for the Prime Minister including this money in the budget, it would not have happened,” she said at the time.

More than a year on, feasibility studies for both projects have only just begun, with no promise either pool will be built.

Pearce, which the Liberals feared they would lose to Labor, had $30 million pledged under the scheme, including $25 million for the Ellenbrook Pools and Recreation Centre.

Greg Blood, a former Sports Commission employee and sport policy historian, told the ABC that both Labor and the Coalition used sport to campaign, but the Coalition was more effective in doing so in contestable electorates.

“My concern is that election-funding announcements are bypassing the need for evidence-based decision-making in regards to community sport facilities,” he said.

“Funding facilities without an assessment of need is unlikely to provide optimal outcomes.”