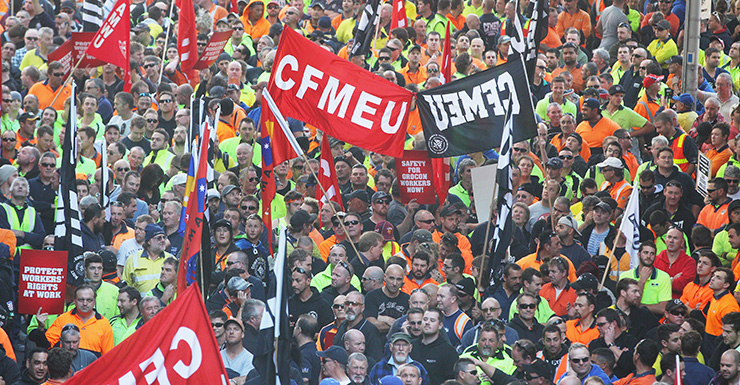 Labor is about to reform the construction industry watchdog and rationalise its often bizarre rules. Photo: AAP Photo: AAP

The building industry watchdog’s powers will be wound back to the “bare legal minimum” within days, as the Albanese government pushes ahead with plans to scrap the regulator entirely.

Workplace Relations Minister Tony Burke announced on Sunday that building code regulation changes will come into effect from Tuesday, before he introduces legislation later in 2022 to abolish the Australian Building and Construction Commission.

“As of Tuesday, the ABCC, in its powers, will be pulled back to the bare legal minimum,” he told ABC television.

“A lot of what it’s been doing can appropriately be done by another regulator.”

Mr Burke said some of the commission’s “ridiculous rules” under the building code were a waste of taxpayer money.

“We will no longer be spending taxpayers’ money determining what sticker someone’s allowed to put on their helmet, whether or not a safety sign has to be pulled down because it’s got a union logo in the bottom corner, or what flag might be flying at a building site,” he said.

“Those sorts of issues should never have been something for an official government regulator to be wasting taxpayers’ money on, (and) as of Tuesday those offences are gone altogether.”

When asked if rules on alcohol and drug testing on building sites would continue, Mr Burke said those rules were “really weird”.

“The threshold for when they apply and when they don’t isn’t based on a safety concern,” he said.

“It’s based on, one, whether you’re in construction, and two, a formula of the extent of Commonwealth contribution relative to the value of the project, as though somehow that’s a safety principle.

“These sorts of rules, to make sure that people are fit and ready for work, are just as important on a mining site as they are on a construction site.”

The nation’s peak workers’ union, the ACTU, said Mr Burke’s decision means “anti-worker” elements of the building code, put in place by the previous coalition government in 2016, will finally be removed.

“The code was one of the ideological projects of the previous government, who spent nearly a decade attacking unions and suppressing wages,” ACTU Secretary Sally McManus said on Sunday.

“It stopped progress on apprenticeships and skills in the construction industry and did nothing to address safety or wage theft.”

The Electrical Trades Union said scrapping the building code was a “no brainer”.

Alan Kohler: The hubris of central bankers and the limits of money
PM Anthony Albanese lauds ‘strongest ever’ moves to keep foot and mouth out of Australia
Today's Stories