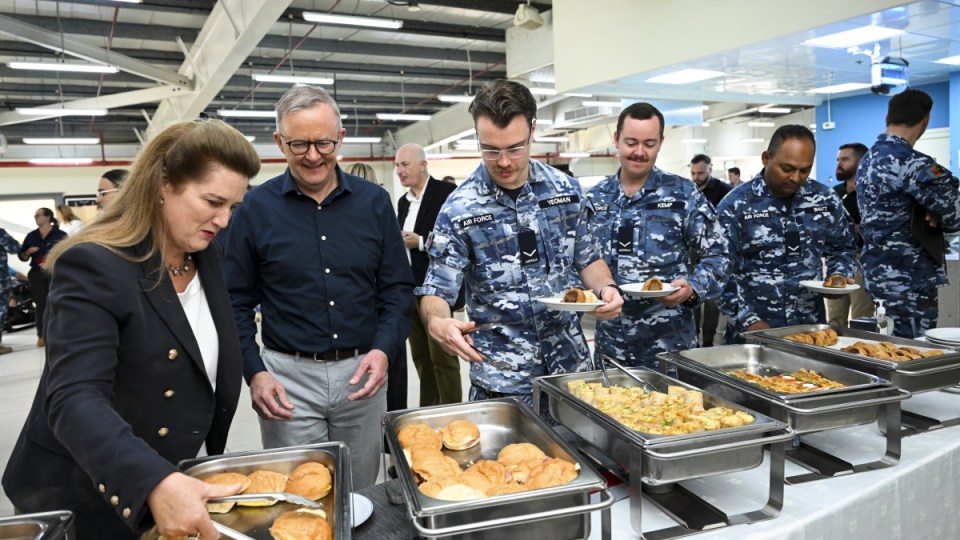 Mr Albanese lines up with ADF members at Camp Baird for breakfast on Monday. Photo: AAP

Prime Minister Anthony Albanese has made a surprise visit to Australian troops stationed overseas on his way to the NATO summit in Madrid.

Mr Albanese stopped at the United Arab Emirates’ Al Minhad Air Base on Monday, on his way to Spain.

There are about 50 Australian troops stationed at the base’s Camp Baird. It is the staging point for Australia’s Middle East operations, including last year’s August’s evacuation of thousands of Afghans after the Taliban’s victory.

Mr Albanese and his partner Jodie Heydon laid a wreath at the camp’s memorial and had breakfast with Australian Defence Force members and embassy staff.

Mr Albanese was due to arrive in Madrid on Monday afternoon (local time) for an “absolutely critical” NATO Summit, which will discuss supporting Ukraine against Russia following its invasion.

He will be joined by his counterparts from New Zealand, South Korea and Japan under the “four Asia-Pacific partners” for the first time at the biggest NATO summit ever held.

Speaking on the tarmac in Sydney on Sunday before boarding his plane for Europe, Mr Albanese raised the Russia-China relationship, saying their “arrangements and closeness that has occurred in recent times means that it’s also very important for our region”.

“We live in an uncertain world,” he said.

“The Russian invasion of Ukraine has upset the norms that we regarded, that the rule of law would be maintained, that sovereign nations’ borders would be respected and that we wouldn’t see the sort of brutal invasion that we’ve seen from Russia, in Ukraine.”

Mr Albanese said it was vital the international community stood with Ukraine, while its people were doing the “democratic world an enormous service”.

He will have one-on-one meetings with British Prime Minister Boris Johnson and US President Joe Biden during the summit.

Mr Albanese also said he was still taking “security advice” on whether it was safe to visit Ukraine President Volodymyr Zelensky in Kyiv.

“We want to make sure that it is safe to do so and that we’re not placing Australian service personnel at risk by undertaking such a journey,” he said.

“It certainly is appreciated … that President Zelensky has made this invitation to Australia, and we regard it as a good thing if it’s able to be undertaken.”

Australia has contributed more than $285 million in military aid, including Bushmaster vehicles and armoured personnel carriers to Ukraine.

Mr Albanese will also visit Paris later in the week at the invitation of French President Emmanuel Macron to heal the rift between the two countries after submarines deal was dumped by the former Australian government.

Australia’s current Collins-class submarines were going to be replaced by another conventional fleet to be built by French company Naval Group in South Australia.

But the $90 billion defence contract was scrapped last year after the former Morrison government decided to instead pursue nuclear-powered submarines under the AUKUS partnership.