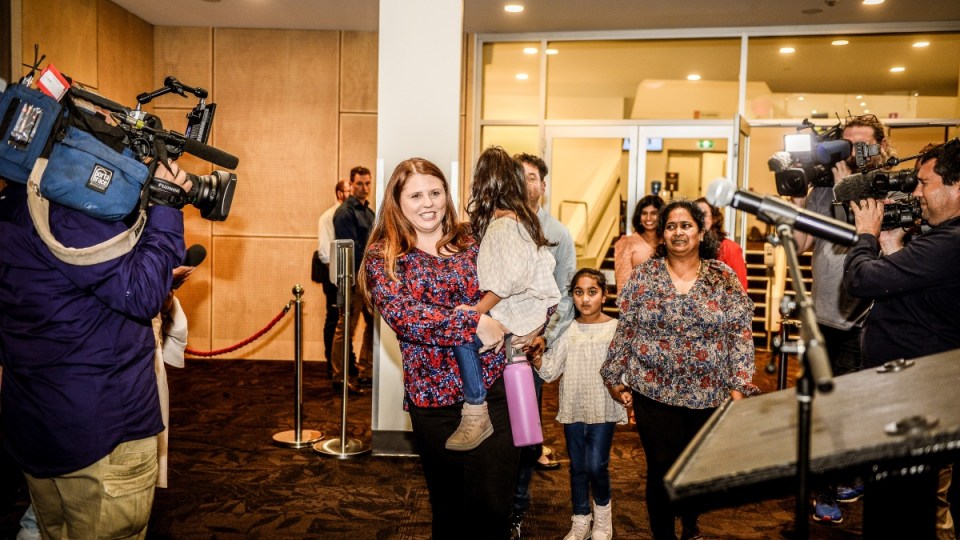 Mr Albanese was greeted by the asylum-seeker family in Gladstone on Wednesday, after they were released from immigration detention following the election of the Labor government.

The Sri Lankan family of four had travelled about 120 kilometres from their town to meet with the prime minister and gift him flowers for their freedom.

Photos posted to Twitter show Mr Albanese and the family in a warm embrace.

“So lovely to meet with the Nadesalingam family today. They’re finally home, Tharnicaa and Kopika are going to school, and the Biloela community have welcomed back a much loved family,” Mr Albanese wrote.

During the election campaign, Labor pledged that if elected, the family would be allowed to go back home to Biloela after four years in detention.

So lovely to meet with the Nadesalingam family today. They’re finally home, Tharnicaa and Kopika are going to school, and the Biloela community have welcomed back a much loved family. pic.twitter.com/eBS610f5Zf

The cabinet met in the regional city as part of the prime minister’s first visit to Queensland since winning last month’s election.

“That will be informing our decisions before parliament resumes back in July,” he said of the community meeting held alongside the cabinet talks.

Gladstone sits in the Queensland seat of Flynn, which the Coalition retained despite a swing to Labor.

While Labor did not win any new seats in the Sunshine State, the prime minister said Queensland remains important.

“I want to represent people regardless of how they voted. I want a government that works for all Australians, wherever they live,” he said.

Listening ‘to people on the ground’

“We were given two ears and one mouth for a reason, we need to listen to people on the ground,” the prime minister said.

Mr Albanese emphasised regional jobs as part of a pitch to transition to more renewable energy and net-zero emissions by 2050.

He said commitments made to regional Australia during the campaign would be honoured in the October budget.

“We know that the cost of housing, for example, is a big pressure in the regions … (going) up higher than it has for people in the cities,” he said.

Dutton takes his team to Perth

“It allows us to hear the messages because obviously we were disappointed with the results here in WA at the last election, so there’s a lot of rebuilding for us to do,” he said.

Labor picked up four extra seats in WA, where the Liberals already have a minuscule presence in the state parliament after the party’s trouncing by Labor Premier Mark McGowan.

Nationals leader David Littleproud said the new shadow ministry presented an opportunity for generational change and renewal, but also drew on the experience of parliamentary veterans.