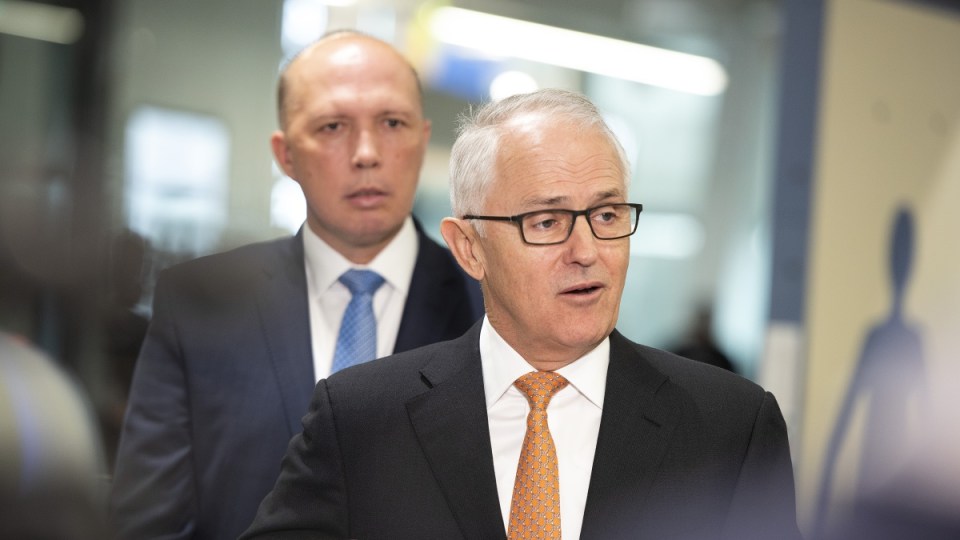 Peter Dutton [left] has been criticised by Malcolm Turnbull over his handling of the French submarine deal. Photo: AAP

Mr Turnbull criticised the former defence minister for his role in scrapping a French submarine deal in favour of acquiring nuclear- powered subs under the AUKUS security pact.

Mr Dutton said he had planned to buy two Virginia-class subs from the US by 2030, to plug a gap, with nuclear submarines unlikely to be delivered until a decade later.

“It was just more blustering from Dutton … he’s a belligerent blusterer who wrecked a submarine contract,” Mr Turnbull told ABC radio on Monday.

“We’re now in a position where we don’t have any submarine program at all.

“Between (former prime minister Scott) Morrison and Dutton they did enormous damage to Australia’s national security.”

Opposition defence spokesman Andrew Hastie said a possible interim solution would send the wrong message to American and British allies that Australia wasn’t serious about delivery in a “timely fashion”.

“It sends a bad signal to our would-be adversaries, and as the Chief of Navy himself said – on the public record – the Royal Australian Navy is a fairly small force, and we can’t be running three different submarine classes at one time,” he told Sky News.

Former defence department secretary Dennis Richardson said it was wishful thinking that Australia could have received two American nuclear submarines by the end of the decade.

“The more the Americans hear senior Australians talk about the possibility of getting them in five years’ time or in 10 years’ time, the more people in the American system scratch their heads and ask themselves whether they’re dealing with a country that seriously understands the depth of the challenge,” he said.

“It’s a long shot to think that we’ll get nuclear-powered submarines from the Americans by 2030.”

Defence spending would need to lift to acquire subs

Mr Richardson said Australia did not yet have the port facilities needed to service nuclear submarines or trained crew.

He also noted if Australia was to have nuclear-powered submarines, annual defence spending would need to lift to above three per cent of GDP.

Mr Richardson said the settlement was a good outcome “for the effort” that had been put in.

“The speed with which we have moved to settle this matter, put a line underneath it and to move forward was very much welcomed by the French minister (for defence Sebastien Lecornu),” Mr Marles said

“France and Australia have so much in common,” he added, noting the European nation’s strong presence in the Pacific region.

Mr Albanese confirmed he is planning to visit Paris soon in a bid to repair the relationship, following an invitation from his French counterpart Emmanuel Macron.