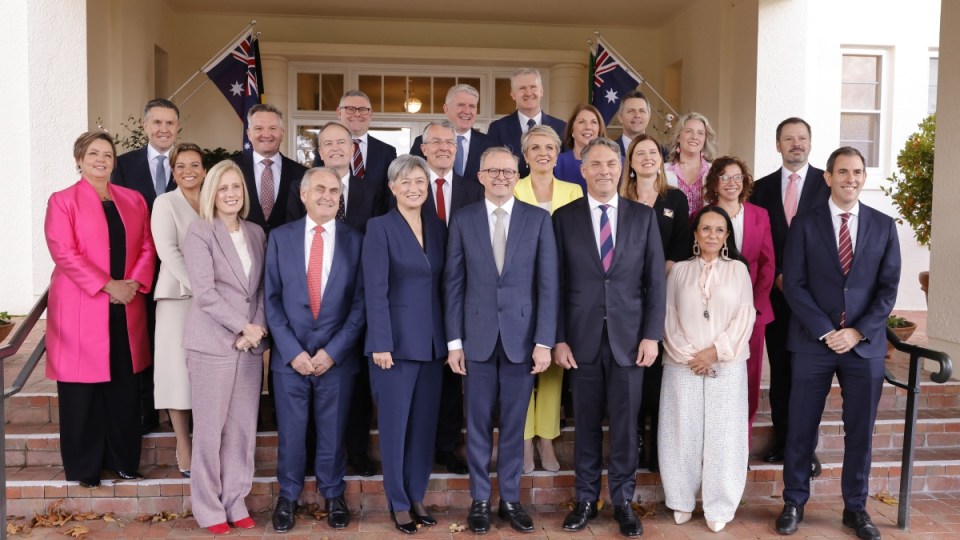 Anthony Albanese’s new cabinet has been sworn in at Government House in Canberra.

Governor-General David Hurley swore in Labor’s new ministry, which includes a record number of women and MPs from non-Anglo backgrounds.

Mr Albanese said he was proud to lead “an inclusive government that is as diverse as Australia itself”.

“This is the largest number of women who have ever served in an Australian cabinet,” he said on Tuesday.

“We have an overflow of talent on our side of the parliament … it’s the most experienced incoming Labor government in our history since federation.”

Several of the new Labor ministers drove themselves to Government House on a freezing Canberra day for Wednesday’s formal swearing-in. At least one turned up in a taxi, and many brought young children.

In addition, Mr Marles – who was first up on Wednesday – picks up Defence from Brendan O’Connor.

With the new cabinet sworn in in order of seniority, Mr Marles was followed by Senator Wong and Dr Chalmers.

Senator Gallagher was next, adding Minister for Women and Minister for the Public Service to her existing role.

Tanya Plibersek was sworn in as Environment Minister, in a shift from her long-held education portfolio. Labor’s previous environment spokesman, Terri Butler, lost her Queensland seat at the election.

Mr Albanese has denied the shift is a demotion for Ms Plibersek. Jason Clare, who appears several places below Ms Plibersek on Mr Albanese’s cabinet list, is the new Education Minister.

Deputy Labor leader Richard Marles defended the move, saying the environment ministry could not be characterised as a demotion, with the area front and centre of Labor’s priorities.

“It’s one of the most important ministries we have got which has been an enduring passion for Tanya Plibersek,” he told the Nine Network on Wednesday.

The new Attorney-General is Mark Dreyfus, who previously served in the position in 2013.

Victorian MP Clare O’Neil is Home Affairs Minister, replacing Kristina Keneally, who was unsuccessful at the election in an attempt to switch to the lower house.

In another new role, NSW MP Matt Thistlethwaite becomes Minister for the Republic, as well as taking on the role of Assistant Minister for Defence and for Veterans’ Affairs.

It remains to be seen what progress Labor will make on the issue after it confirmed a constitutionally-enshrined First Nations Voice to Parliament was its referendum priority.

But Mr FitzSimons said the republic movement now had “the wind in our sails”.

There was also a lighter moment on Wednesday, when an unsilenced phone rang out loud, playing INXS’s Need You Tonight, just as new Regional Development and Local Government Kristy McBain was shaking Governor-General’s David Hurley’s hand.

Labor secured the last of its 77 seats on Tuesday, with a narrow win in the NSW south coast seat of Gilmore. That gives it a clear but slim majority in the 151-seat House of Representatives.

Mr Albanese is yet to name a speaker. That decision is likely to wait until closer to parliament’s return on July 26.

It is not yet clear if that will be a Labor MP, or someone from the crossbench. Tasmanian independent Andrew Wilkie has expressed an interest in the role.

Historic firsts as Albanese’s new cabinet is sworn in