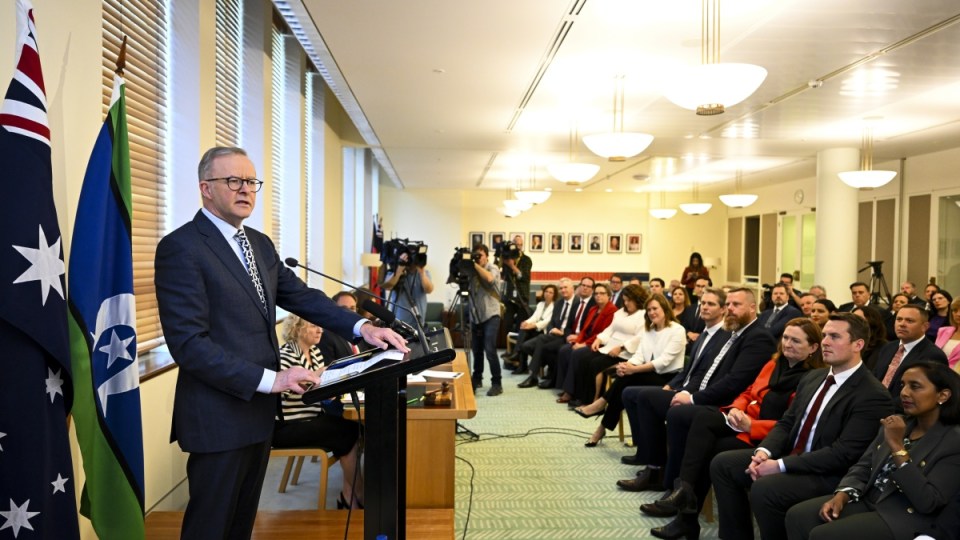 Prime Minister Anthony Albanese has met with his caucus for the first time since the election. Photo: AAP

An emotional Prime Minister Anthony Albanese has been greeted with cheers and applause as he addressed a jubilant Labor caucus for the first time since the May 21 election.

Mr Albanese, who set July 26 as the opening date for the 47th federal Parliament, praised his Labor for a “magnificent campaign” that delivered it government.

He choked back tears as he finished his speech with thanks to his team for the “incredible honour” of being Prime Minister.

It came as Labor was poised to claim its 77th seat, with its lead in the NSW seat of Gilmore extending to more than 200 votes.

Labor’s Fiona Phillips remained narrowly ahead of the Liberals’ Andrew Constance on Tuesday afternoon. Preference flows propelled Ms Phillips to the lead, despite her getting 36 per cent of the primary vote and Mr Constance 42 per cent.

Before Tuesday’s upbeat caucus meeting in Canberra, some Labor members were reportedly gathered for coffee when news of the Gilmore count filtered through.

“Hello 77!” one MP yelled as they hugged Ms Phillips, according to a report in The Guardian.

At the caucus meeting, Mr Albanese outlined his agenda for the rest of the year and promised to leave a legacy and work with the Coalition opposition and cross benchers. He also praised his colleagues for the disciplined election campaign.

“We refused to go off track. We had a good story to tell. We weren’t intimidated by anyone. We didn’t get distracted. We stayed on course. And the discipline that we showed was magnificent,” he said.

“Planning is the first step. Faith is the second. And solidarity is the third. They are the three things that I want to define this caucus, this Parliament. Because in the last parliament, even when we were making calls that were, you know, difficult, I think we got the big calls right. And I thank you for backing in those big calls.”

Labor will introduce a bill by the end of the year for a federal anti-corruption commission, review wasteful spending and hand down a budget in October.

“I also spoke as the election approached as well – I didn’t put it this way but I’ll start now and you’ll get used to hearing it – I spoke about back-to-back premierships. I spoke about two elections,” he said.

Mr Albanese is due to unveil his cabinet and broader ministry line-up after Labor factions met in Canberra on Monday.

Sixteen members will come from the right and 14 from the left due to a proportionate split within caucus. It is also expected to include a record number of women and promotions to the ministry for up-and-coming talent including Queensland’s Anika Wells and NSW MP Kristy McBain.

The ministry will be finalised on Tuesday and sworn in at Government House on Wednesday.

Mr Albanese will then fly to Indonesia on Sunday for a three-day diplomatic visit.

An interim cabinet of five members was sworn in after Mr Albanese claimed victory in the federal election on May 21.

While Mr Albanese had earlier indicated MPs who held a shadow ministry in opposition would likely hold a similar portfolio in government, some changes are expected.

Among them will be a replacement for home affairs, with previous Labor spokeswoman Kristina Keneally failing to win the seat of Fowler in Sydney.

Other portfolios have already been announced, with Linda Burney to be Indigenous Affairs Minister, the second Aboriginal person in the role.

In the only other electorate that remains in doubt, incumbent Liberal MP Michael Sukkar was 619 votes clear of Labor candidate Matt Gregg in the Victorian seat of Deakin on Tuesday.