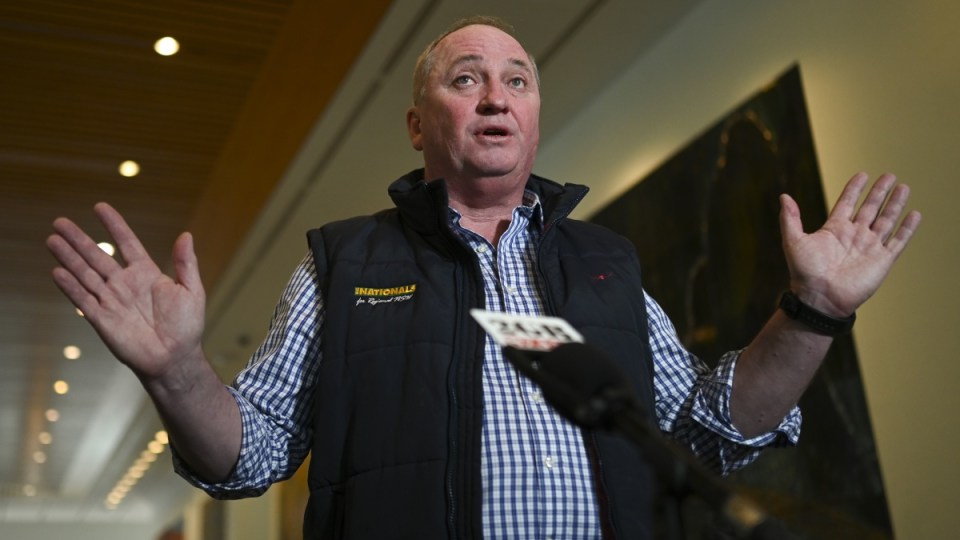 Barnaby Joyce says he was always prepared to "transition" from the Nationals leadership. Photo: AAP

Ousted Nationals leader Barnaby Joyce has urged the new federal government to “come on board” with moving Australia to nuclear energy.

Speaking for the first time since he lost the leadership to David Littleproud on Monday, Mr Joyce also backed his replacement’s call to move to nuclear energy.

“Let’s be brave enough and start saying things like nuclear energy. Otherwise, you’re going to come up with this implausible position where you say ‘I want to achieve this but I really don’t have the technology to do it’,” he said on Tuesday.

“I’d love to see the Labor Party come on board with us and not turn it into some sort of ridiculous: ‘You’re going to put a nuclear reactor in someone’s backyard’, which just divides place up.”

After winning the Nationals’ leadership spill on Monday, Mr Littleproud said it was time for Australia to hold a “mature” conversation on nuclear energy, which remains subject to a bipartisan moratorium.

Mr Joyce also lobbed another bomb into Australian politics on Tuesday, declaring he had always planned to move away from leading his party, after post-election negotiations for a new Coalition agreement.

The Nationals retained all their seats at the federal election under Mr Joyce, but his leadership was challenged by David Littleproud and Darren Chester, with the former ultimately being successful.

Despite contesting the Nationals leadership on Monday, Mr Joyce called the loss of the spill “a weight off my shoulders”.

“I always said I was transitioning out of the leadership, and that’s what I was going to do,” he said.

“I obviously didn’t want to do it yesterday, but that’s life, it’s politics.”

He said he would stay on as member for the NSW seat of New England for the full term.

Mr Joyce said while he believed he was in a strong position to negotiate the new coalition agreement as the Nationals push for extra representation in shadow cabinet, Mr Littleproud would do a good job.

“Obviously you back yourself in. I know how to negotiate and walk into these things as a business person,” he said.

The former leader lauded his negotiation skills after bargaining a near $30 billion concession from Scott Morrison to sign up to net-zero emissions ahead of the election.

“I’m a little old bush accountant. I know how to do a deal,” he said.

Mr Littleproud said the incoming leadership – which includes new deputy leader Perin Davey – was best placed to take back government at the 2025 election. But he would still draw on the experience of Mr Joyce.

“This isn’t a reflection on the achievements of Barnaby Joyce in any way, shape or form,” he said.

“This is just about who was prepared to lead in 2025 and not have to shift leadership teams halfway through [the term].

“We wanted to have continuity from today, to have a stable leadership team right through, to be able to also have a team around that we’ll take towards 2025.”

Victorian senator Bridget McKenzie will remain as Nationals leader in the Senate.

“I want to make sure we get our fair share. If we don’t, you’ll hear from me,” he said.

While the Liberals and Nationals needed to remain in coalition to form a viable alternative government, neither party needed to compromise on its core values, Mr Littleproud said.

“But respecting each other’s values and principles is important in achieving that. If we do that, I’m sure we’ll have a very strong alternative to the current government.”

Mr Joyce rejected arguments the strong stance from him and his colleagues on coalmining was a drag on the Liberal vote, despite acknowledging throughout the campaign he was not popular in the inner cities.

“If you’re the Liberal Party and in a suburban seat, then ask yourself the question: ‘What went wrong for me?’. Don’t start looking around for somebody else to blame,” he said.

“You’re not really facing up to your own dilemma.

“The other thing is you’re just up against an ‘it’s time’ proposition.

Kirstie Clements: An eye-lash game changer and the ultimate beauty kit
Action but not laws on climate: Coalition
Today's Stories