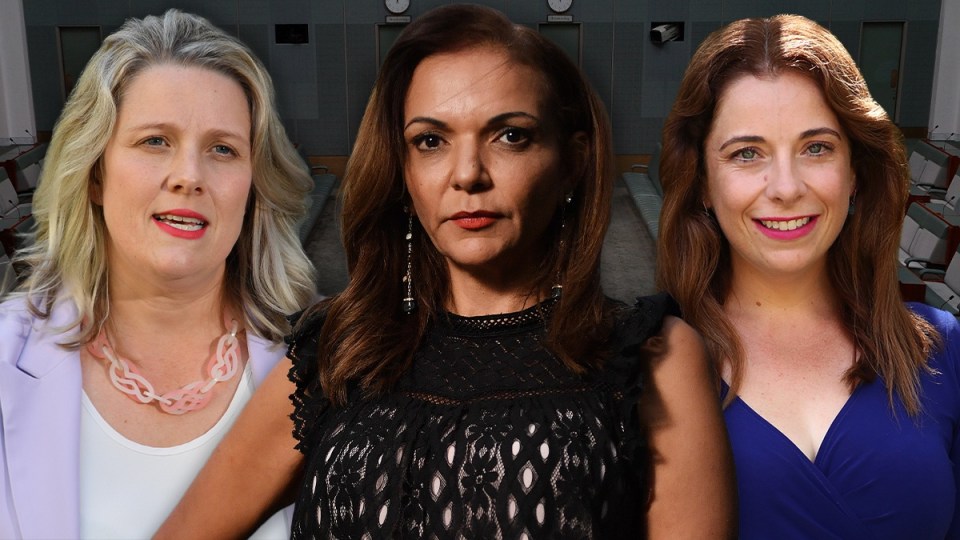 The women ushering in change on the front bench include Clare O’Neil, Dr Anne Aly and Annika Wells. Photo: TND

Thirteen women, the most since Federation, and the first Muslim ministers will be sworn in today as members of the most diverse government front bench in history.

A ministerial bench of 30 will be sworn into reshuffled portfolios at Government House on Wednesday including the newest elevation to cabinet, Clare O’Neil (home affairs and cybersecurity), and ministers taking on new portfolios – Tanya Plibersek (environment and water) and Amanda Rishworth (social services).

Proportionally, women will account for nearly 45 per cent of the first Albanese ministry, exceeding the previous government’s high watermark of just over 30 per cent and 30 per cent in the final Rudd ministry.

“This is the largest number of women who have ever served in an Australian cabinet,” Prime Minister Anthony Albanese said.

“This is far more representative than any government party room has ever been in our history.”

Anne Aly (early childhood education and youth) becomes the first Muslim woman to serve as a minister. Dr Aly’s promotion was the last agreed on as internal party talks reached a conclusion – making her the final and unexpected addition to a historic ministry.

“Being a minister was certainly not in my life plan,” Dr Aly said.

Dr Aly swapped the Mediterranean coast for Chipping Norton in Sydney’s south-west when her family emigrated from Egypt when she was two.

Much else about her life story makes her political success a departure from the familiar Canberra script.

Dr Aly says it was only after she was elected Australia’s first Muslim woman MP – despite some grubby smears – that a conversation changed her thinking about why diversity in Parliament matters: A constituent said she had told her young daughter that Dr Aly’s victory proof Muslim girls in Australia could achieve anything.

“The significance of it to other people, to the people watching really struck me at that point,” she told The New Daily shortly before her appointment was announced.

“I made a very conscious decision that, coming in here, I would do everything that I could to not just open the door but break down the wall.

“I feel so heartened by the fact that I may have been the first, but I’m certainly not going to be the last.”

Mr Albanese told reporters that the government’s front bench was as inclusive as Australia itself.

Dr Aly says the appointments send an important message to the millions of Australian women who watched in horror at the accounts of misconduct from the last Parliament.

“We all here stand on the shoulders of those who went before us, those trailblazing women who were the first or only ones,” she said.

“What a significant amount of progress we’ve made. Has it been fast? No. But we’re here now. The important thing now is we keep it going and pave the way for the women who come after us just like those who came before us did.”

Dr Aly led research at Curtin University on counterterrorism and extremism and was a member of an expert advisory group for the UN Security Council.

But in 2015 at the Club de Madrid policy forum she recalls becoming “despondent” while addressing an audience of former world leaders who looked on impassively during discussion of inequality and the conditions that put young people on a path to radicalisation.

“I thought nothing would ever change without political will,” she said.

“I just said: ‘I’m sorry, but each and every one of you has squandered your power’.”

It happened that Western Australian Labor had already set about trying to recruit her; she won the seat of Cowan by her fingernails at the 2016 election.

But following the May 21 election that delivered Labor a landslide she now represents a safe seat and has another on the treasury benches.

“There is such a sense of urgency,” she said of arriving in Canberra as the member of a government for the first time in her career. “We’re here now, come on, let’s get it done”.

The swearing in comes after Labor pulled off its latest election victory and won a majority.

That gives the party a floor majority in Parliament and enough to occupy the Speaker and pass legislation in its own right of 77 seats.

Ed Husic will be sworn in as the Science Minister making him the first ever Muslim man to serve in cabinet.

Linda Burney will focus exclusively on the constitutional recognition of indigenous Australians and an accompanying referendum as the Minister for Indigenous Affairs and so has not retained social services. Malarndirri McCarthy is an assistant minister and Pat Dodson is a special envoy on Indigenous recognition.

Mr Albanese fended off a question about why only one woman, Penny Wong, who is leader in the upper house, featured in the parliamentary leadership team.

He said more work needed to be done.

“We are making progress,” he said. “I want to see us move towards 50-50 representation across all of the spectrum.”

Mr Albanese said that Ms Plibersek had been “very happy” to take on the environment and water portfolio after he removed her from education and Minister for Women; Jason Clare is now the government’s education spokesman.

A total of 10 women are in the inner ministry, out of 23 cabinet spots.

Levels of representation today are a legacy of reform won by women united across Labor’s factions at the party’s 1994 conference.

A new rule was passed requiring at least 35 per cent of preselections in winnable seats to go to women candidates.

“It was a hard-won battle that was resisted heavily,” said Dr Marija Taflaga, the head of the centre for the study of Australian democracy at the ANU.

“They basically ratchet up the target each poll.”

Under Labor rules the caucus, in practice the party’s factions, decide who moves to the front bench while the leader allocates portfolios.

Dr Taflaga says another key to increasing representation has been the design of a system that puts the onus on the party factions that determine preselections to meet quotas.

If quotas are not met then all preselections are thrown open, undoing the power of party kingmakers.

Although the conservative side of politics has not been as successful, the representation of women in the Liberals has grown significantly since only Julie Bishop served in the first Abbott ministry.

For the Liberals, women’s representation in Cabinet peaked under Mr Morrison at seven positions.

Proposals to bring in quotas have been met with opposition in some corners of the party. But the party room’s new deputy leader, Sussan Ley, advocates gender targets to lure women back to the Liberals.

Margaret Guilfoyle was the first Australian woman to serve as a minister with portfolio; she was appointed the Fraser government’s spokeswoman for education in 1975 and later as minister for social security and finance.

“Women in Australia tend not to be promoted as quickly as in other countries,” Dr Taflaga said.

The first meeting of the full ministry will convene on Wednesday afternoon; the swearing-in is scheduled for the morning.