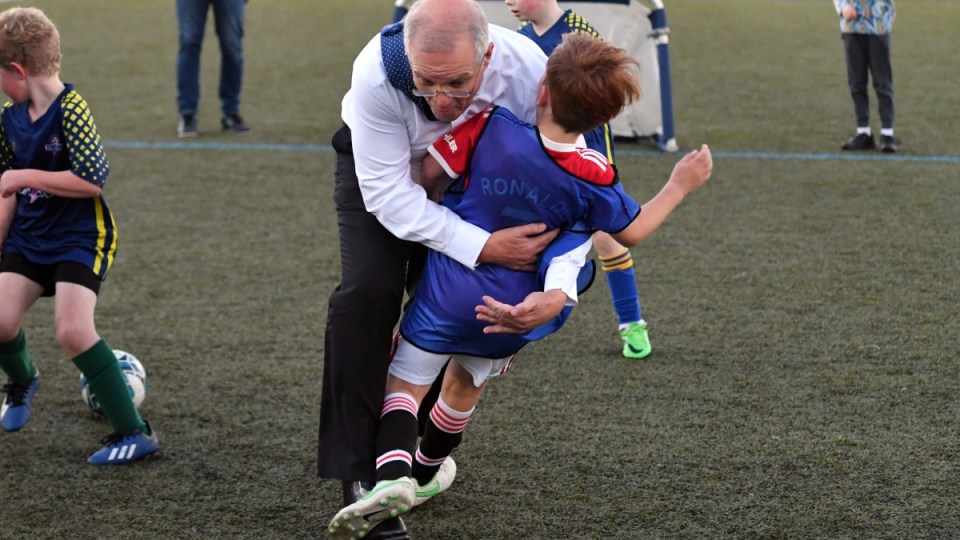 Prime Minister Scott Morrison has knocked over an eight-year-old boy in front of cameras at a regional Tasmanian soccer club, with footage of the incident going viral.

Mr Morrison, who earlier this month described himself as a “bulldozer”, was at the Devonport City Strikers football club in northern Tasmania on Wednesday evening to promise a re-elected Coalition would fund a $3.5 million redevelopment of its pitch and clubrooms.

But the media event took an unexpected turn when the Prime Minister joined the club’s under-eights team to play a scratch match.

Mr Morrison was running towards the goals and lost his footing, causing him to fall into eight-year-old Luca Fauvette and bring him to the ground.

Luca left training early and could not be located by the Prime Minister’s travelling press pack after the incident.

Speaking to the club’s members afterwards, Mr Morrison joked that Luca might have gone to hospital.

“I look forward to coming back on another occasion,” the Prime Minister said.

“I think that when that grandstand comes down, I hear it might need a bit of a bulldozer to knock it down, so I might be able to help with that.”

One of the club’s coaches, Peter Best, told The New Daily the incident was “very unexpected”.

“You hope everything goes well, but when you see that you think oh dear,” he said.

Many compared it to the time then Mayor of London Boris Johnson bowled into a 10-year-old schoolboy while playing rugby in Tokyo.