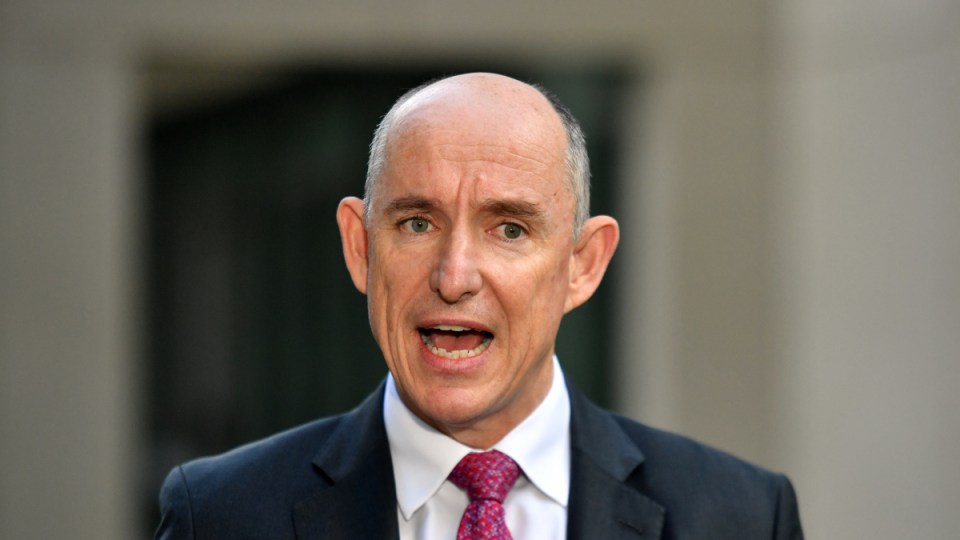 Stuart Robert was overly generous with his estimation of how long he has been filling in as education minister. Photo: AAP

Coalition frontbencher Stuart Robert has claimed to have been fill-in education minister for “almost 12 months” in a stumbling TV interview.

Mr Robert more than doubled the time he has been standing in for Alan Tudge, who stood aside as minister amid an investigation into his consensual affair with a staffer, in Thursday’s interview on ABC TV.

He also admitted that he didn’t know where Mr Tudge was.

The Coalition attempted to cover up Mr Robert’s blooper, sending out a transcript claiming he had said “a number of months”. A spokesman said Mr Robert “misspoke”, and the error was corrected.

“I’m the acting education minister, Lisa, and have been for almost 12 months. So I’ve got full authority in terms of running the education portfolio, as well as skills and workplace and the other things that I do,” he told ABC News Breakfast.

In face, he has been acting in the role since December 2, just over five months.

Mr Robert was also asked where Mr Tudge – who has kept a very low profile on the election campaign – was.

“I suggest in his electorate,” he said.

“I don’t know where he is. I tend not to keep track of my colleagues’ whereabouts.”

Mr Robert’s comments further muddy the waters about Mr Tudge’s continued role in the government. On Wednesday, Prime Minister Scott Morrison said Mr Tudge, who has denied allegations of breaching the ministerial code of conduct, would be welcome back in cabinet after the election if he wished to do so.

Later on Thursday, Opposition Leader Anthony Albanese had his own misstep when he has failed to list the six points of his party’s NDIS platform under a grilling by journalists.

He was saved by an adviser handing him his policy brief midway through a press conference.

The Labor leader has been under attack for not knowing his brief – an accusation he denies – but was unable to outline his plan when repeatedly questioned about it on Thursday.

“What [the plan is] about is making sure that we take pressure off people who are at the moment having their programs cut,” he said.

“We will make sure that there’s administrative efficiency. So much is being wasted. We will put people at the centre of the NDIS in all of our programs.”

After being handed his policy brief and stalling while he flipped through the pages, Mr Albanese read through the six points.

Mr Albanese also failed to directly point towards fiscal cuts to the NDIS when asked about Labor’s attacks against the government, saying they could be found in the budget document.

“The government produced savings there.”

But statements from the most recent budget chart a consistent rise in NDIS funding from 2015/16, and a projected increase each year to 2032/33.

Mr Albanese earlier fended off suggestions he was avoiding commenting on the specifics of Labor policy, by referring questions to other party officials.

“There was a report the other day that said, ‘Albanese gives housing question to housing shadow minister’ and we all just had a chuckle and could not believe how, frankly, strange that spin was,” he told the Nine Network.

“This is one of the most bizarre things I’ve ever seen. I’ve answered questions each and every day. I’m the captain. I’m proud of my team.”

Mr Albanese also said he remained open to the possibility of working with independent MPs, spruiking his past experience in the Gillard and Rudd governments when Labor worked with the cross bench.

“My aim is to get people to vote Labor, to elect at least 76 members of the House of Representatives … and if that occurs, I will give respect not just to the cross-benchers, but to the other side as well,” he told ABC radio.

“That’s the way that I operated as leader of the government in the House of Representatives during the Gillard government, treating people with respect.”

The Greens and some independents have indicated a key demand will be stronger emissions reduction targets in the case of a hung parliament.

“Our policies are 43 per cent by 2030. What I’m interested in is the implementation of our policy,” Mr Albanese said.

“We don’t have the same policy as the independents or the Greens or the Liberal Party.”