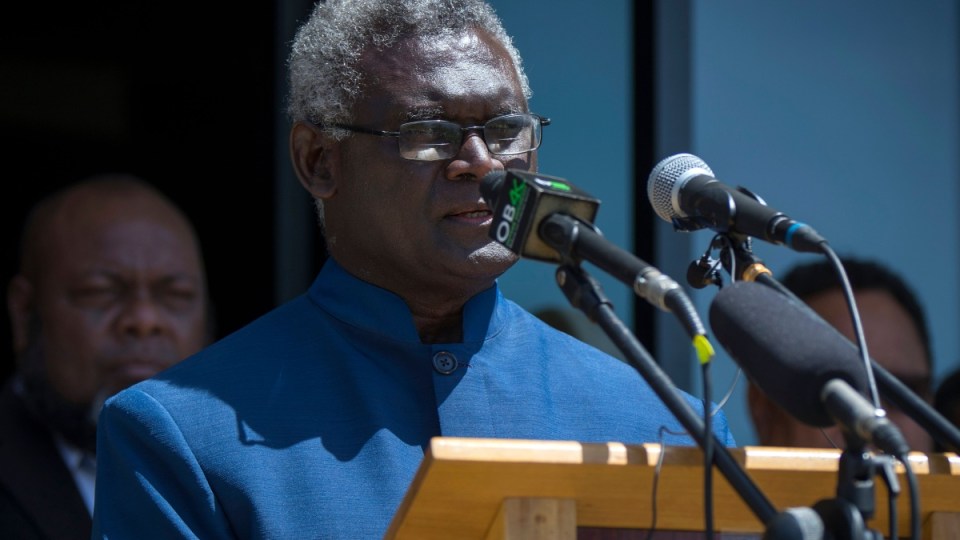 Solomon Islands Prime Minister Manasseh Sogavare has slammed the Australian government for failing to consult with the Pacific nation ahead of joining the AUKUS alliance.

Speaking before Solomon Islands parliament, Mr Sogavare said the country was not given prior warning Australia had signed up to a new security agreement that involved nuclear submarines.

The comments come after the Solomon Islands signed a security pact with China. The move has been criticised by Australia, partly for its secrecy.

“I realise that Australia is a sovereign country, which can enter into any treaty it wants to, transparently or not, which is exactly what they did with AUKUS.”

The security deal has become one of the leading issues of the election campaign, with the opposition accusing the government of dropping the ball on Pacific relations.

Mr Sogavare said the Solomon Islands did not criticise the AUKUS deal when news of the alliance became known last September.

“When Australia signed up to AUKUS, we did not become theatrical or hysterical about the implications this would have for us,” he said.

Campaigning in Tasmania on Friday, Mr Morrison hit back, saying the Solomon Islands hadn’t raised any issues when they were informed of the AUKUS deal.

“I spoke to Prime Minister Sogavare the day following the announcement … and no issues were raised at that time in that discussion,” he said.

“As time goes on and new relationships are entered into, there’s obviously been some clearly other influences in the perspective taken by the Solomon Islands Prime Minister.”

The ABC also reported on Friday on a memorandum of understanding signed with one of China’s largest defence and aerospace companies that promised to upgrade almost three dozen airstrips in the Solomon Islands as part of an ambitious plan to transform the Pacific Islands country into an “aeronautical hub” for the region.

The document was signed between the two nations near Xi’an in central China, in November 2019, only a few months after the Solomons switched diplomatic recognition to Beijing from Taiwan.

The ABC said the MOU was one of six agreements signed by the Pacific nation and China after the Taiwan decision.

Australian Foreign Minister Marise Payne said the federal government would continue to seek assurances from the Solomons government that the new security deal would not lead to China building a military base in the Pacific nation.

Mr Morrison said such a base in the Solomons would be a “red line” for Australia.

Mr Sogarave took aim at Australia’s security treaty with the Solomons, saying it was inadequate after riots in Honiara were not contained.

Australia sent a peacekeeping force to the Solomons in late 2021 following the riots.

However, Mr Morrison said the Solomons were appreciative of the work carried out by Australian forces.

“Australia is their primary security partner in the region. We’re the first call,” he said.

“We were the first call when those things occurred in December and we would be so again.”