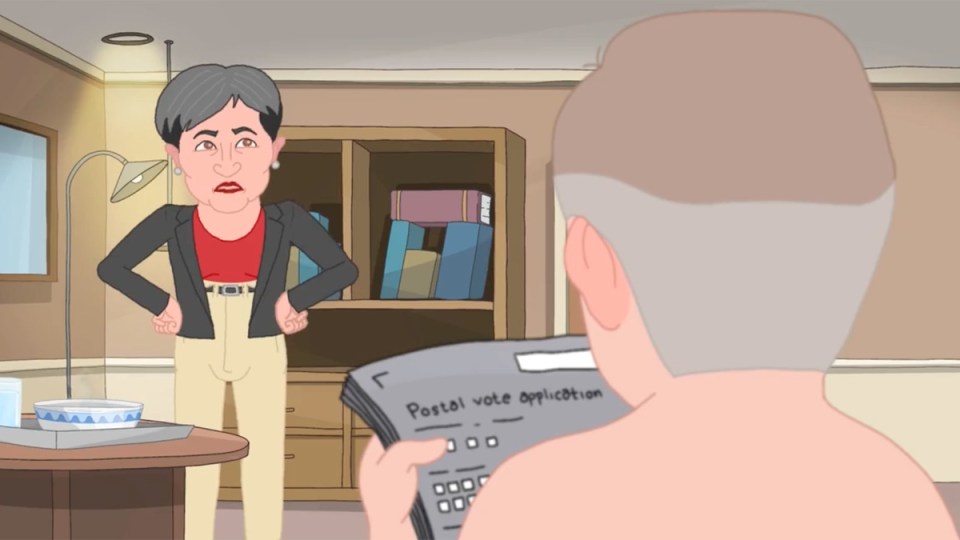 The One Nation video is being investigated by electoral authorities.

One Nation faces an Australian Electoral Commission investigation after suggesting Labor might use fraud to win next month’s election.

The AEC said it was “disappointed” in the latest skit by One Nation leader Pauline Hanson.

“I brought you these,” Senator Wong says.

“These are postal votes under the names of dead people, fake identities, some were stolen out of letterboxes.”

Senator Wong feeds Mr Albanese a bowl of “bat soup”, telling him the AEC doesn’t check voter IDs “because that would be racist”.

“Last election there were thousands of people that voted more than once, and only about 20 of those people were investigated, and no one’s ever been convicted of voter fraud,” she says.

“The AEC won’t find out until it’s too late, and by the time they realise, we’ll already be in government – kicking back, passing laws, spending money.”

“This commentary about the electoral system is very disappointing,” it said.

The ABC reports the organisation is “investigating to see whether it can do anything about this skit because of the allegations of voter fraud in Australia”.

Senator Hanson said her video had been removed from Facebook following the AEC’s complaint. She also claimed it had been “censored” on TikTok.

“Sometimes the truth hurts, so I won’t be taking down the cartoon on any social media platform,” she wrote on Facebook.

There was more trouble for One Nation on Friday, with one of its candidates referred to the federal police after also nominating himself as a candidate for another party in a second electorate.

Malcolm Heffernan, who is listed as a financial adviser, is under investigation after using two birthdates and two names to declare himself as a candidate for the May 21 federal election.

He was nominated for One Nation in the NSW seat of Banks, and for the Australian Federation Party for the West Australian seat of Brand.

The AEC said the nominations for two electoral divisions were in contravention of the Electoral Act.

“Given these declarations are false, the AEC has now referred the matter to the Australian Federal Police for investigation as to whether a crime has been committed,” it said in a statement.

“We have notified Mr Heffernan and both registered political parties regarding this referral.”

Each nomination form had a signed declaration that the candidate did not intend to run as a candidate in any other election held the same day.

The contravention means that Mr Heffernan is incapable of being elected. But candidate nominations for the two electorates must remain as they were formally declared last week.

Ballot papers have been printed, and some voters have already received postal voting packs.