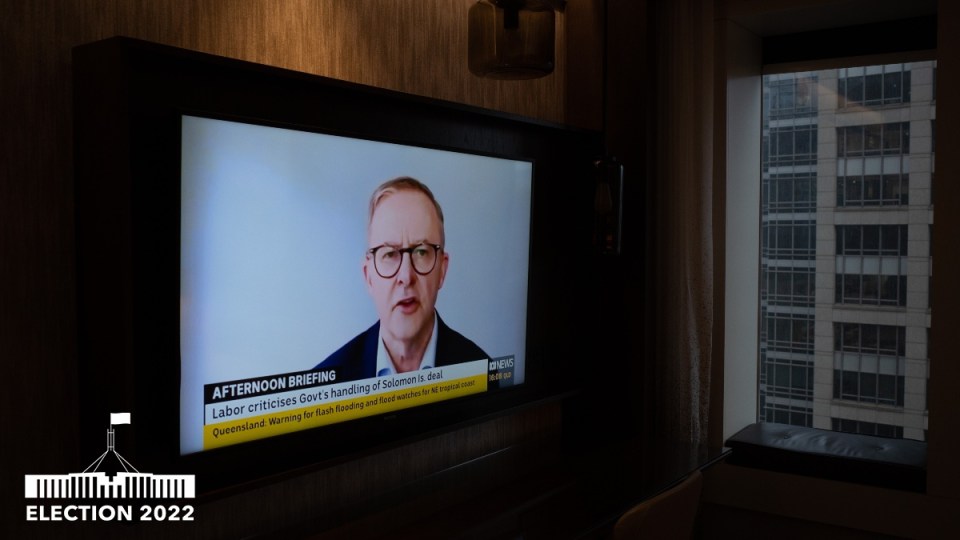 Campaign strategists say Labor must turn Albanese's isolation into a positive for the party. Photo: TND/AAP

The second week of the campaign drew to a close with the Opposition Leader in COVID isolation and the Prime Minister forced to defend his government’s diplomatic record in the Pacific.

Anthony Albanese’s positive test came just as many commentators said he had recovered from his earlier gaffes and had begun to assert himself on the campaign trial.

Whether his isolation will harm Labor’s chances at the ballot box is still up for debate, though.

But what is less ambiguous is the extent to which the Solomon Islands’ security deal with China has become a major election issue.

To help us make sense of it all, TND’s two campaign strategists are back to offer insights on whom and what to watch as the campaign enters its third week.

What changed last week and when?

There were three distinct moments last week: Anthony Albanese won the first debate; he tested positive to COVID-19; and China announced its security agreement with the Solomon Islands.

The first allowed Labor to put some much-needed wind in its sails; the second stalled some of that momentum, and the third could well prove to be the defining issue of this election campaign.

Questions surrounding Australia and its allies’ responses to the rise of China in our region have consequences that go far beyond the next three-year political cycle.

Although what we know of the Solomons agreement doesn’t include permission for China to establish a military base, it seems reasonable to assume that this would be part of Beijing’s plan.

This issue will generate fear in the community and voters will reward the leader who presents the best plan to work with allies, including the United States, New Zealand, Japan and even France.

Is it just a cold, or will it matter for Labor that Albanese has to spend a week at home?

Labor has to turn this into an opportunity.

One of the government’s biggest negatives is Prime Minister Scott Morrison and Labor needs to roll out a steady stream of announcements and look like a nimble government-in-waiting.

This can be done by using portfolio shadow ministers, many of whom are already household names, and showing a contrast to the Prime Minister, who is on a gruelling solo mission around the country.

The nightly TV news networks still need pictures and action and the informal rule is that whoever provides the best pictures leads the political package. Albanese will still need to provide daily commentary but with a static background.

Should Labor try something new to break out of the limitations of remote campaigning?

We have all gotten used to changing media and communications during COVID-19, so we won’t notice much difference on many of the set plays and speeches.

If anything, it eliminates the risk of an Albanese event being taken over by protesters or some other form of unplanned drama.

But his shadow ministers have to step up and reduce the chances of a week of easy publicity for Morrison.

Labor Campaign HQ has to find ways to make this an opportunity rather than a burden.

What’s next for the government?

With the leasing of the Port of Darwin to the Chinese already hanging around the government’s neck and a tame response so far to the Solomons deal, Morrison needs to make sure he doesn’t lose control of the national security debate.

Morrison will continue to hammer home his economic credentials, whether you agree with him or not, and seems more than happy to keep backing the controversial views of the Liberal candidate for Warringah, Katherine Deves.

What changed last week and when?

The ALP warship is sinking. The ALP’s leader, Anthony Albanese, is in bed with COVID-19 and junior minister Jason Clare has outshone Albanese.

China’s secret security deal with the Solomons has pushed the election focus again in the Coalition’s favour, and the ALP election sweet spot of education and health isn’t cutting through.

I’ve never seen a fortnight of political campaigning go so badly for a party.

Is it just a cold, or will it matter for Labor that Albanese has to spend a week at home?

COVID could be the death of Anthony Albanese’s political career. This is how serious him catching the virus is at this critical point of the campaign.

Albanese lost the first week by miles. The second week he had a mild comeback, but everyone remembers Jason Clare’s performance, not his.

The significance of this is the voting public don’t know who Albanese is, what he stands for, or whether he could lead the country.

What the Labor leader desperately needs to change people’s perceptions is to meet voters. But he can’t do this through Zoom or Teams or from his bed recovering from COVID.

Should Labor try something new to break out of the limitations of remote campaigning?

It’s not a bad strategy by the ALP to try and replicate Morrison’s success through COVID, but it is doomed to fail for a few reasons.

Morrison’s COVID radio silence occurred when he needed a break, he was on the back foot, and nothing he could do or say was stopping the political death spiral that was occurring.

Then the Kimberley Kitching ‘Mean Girls’ issue and the war in Ukraine erupted, taking the press gallery’s ‘eye of Sauron’ off him and back on the ALP.

Albanese is remembered for a bad first week and a better second week.

The ALP has struggled for two weeks now to control the narrative. This is seen by the mind-boggling scenario where boats and immigration have become a focus of the election.

This is mind-blowing because we’ve had COVID for two years and immigration has been minimal and no illegal boats have made it to our shores for about a decade.

The ALP can’t win on immigration, boats, national security or the economy.

What’s next for the government?

I believe the war in Ukraine and the Solomon Islands’ security deal with China – and their geopolitical repercussions – are weighing heavily on voters’ minds.

I also believe this national security issue is yet to play out in the marginal seats that both Morrison and Albanese need to win.

And I also don’t believe there are any health or education issues that will connect with and move the votes of swing voters away from the Coalition or those members preferencing the Coalition.

The reason I have formed this view is I’ve been speaking to people in my former western Sydney electorate of Lindsay.

A man we’ll call Mark, who is a health worker, highlighted that the war in Ukraine was weighing heavily on him because he has teenage kids. And he thought China’s Solomon Islands security deal was a worry.

He also said his dealings with people in Nepean Hospital and on the NDIS suggested that most “weren’t struggling and had come out of COVID pretty well”.

This week we should see Albanese back on the hustings and a second leaders’ debate soon afterwards.

Let’s see if he redirects the narrative.

The Strategists: Labor must turn Albanese’s isolation into a positive