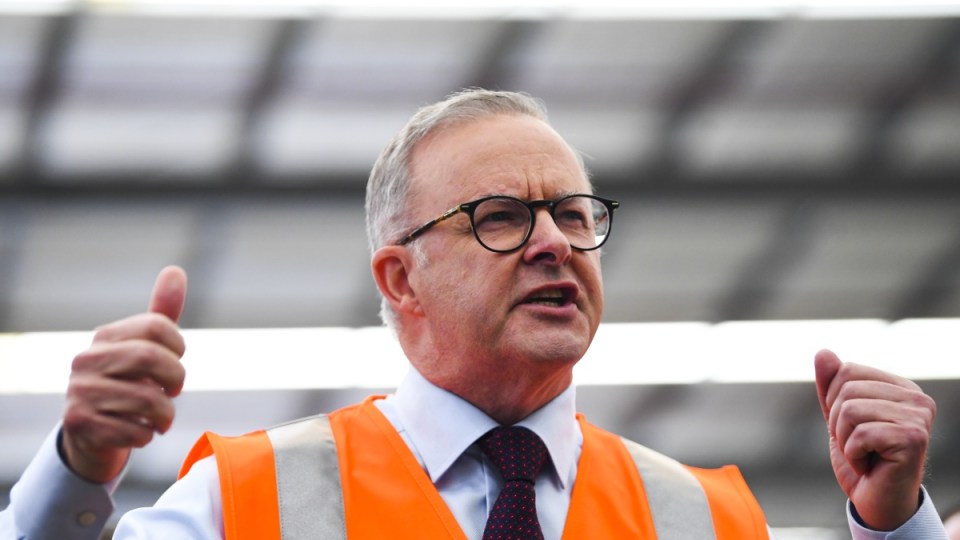 The Liberals and Labor have traded barbs over industrial relations policy ahead of the first leaders’ debate.

Prime Minister Scott Morrison and Labor Leader Anthony Albanese will face off for the first time this election when they meet in Brisbane on Wednesday night and take questions from undecided voters.

While Mr Morrison used the morning to target the ultra-marginal seat of Boothby in Adelaide, Attorney-General Michaelia Cash was doing the morning media rounds to spruik the coalition’s crackdown on construction unions.

The government will double the penalties courts can impose on construction unions, should it win office.

Penalties for serious offences such as unlawful industrial action, freedom of association or coercion will be increased to $88,000 for an individual and $444,000 for a union.

Senator Cash said the changes to the building and construction industry act would try to stamp out “bullying and intimidation” by the Construction, Forestry, Maritime, Mining and Energy Union.

“We are going to ensure that their behaviour, their unlawful behaviour on construction sites in Australia, they are held to account,” she told the Nine Network.

“The current penalties they merely see as the cost of doing business. That is unacceptable. We need to ensure our construction industry in Australia is as productive as it can be.”

Meanwhile, Labor upped the attack on the coalition on working conditions, arguing a re-elected Morrison government would bring back controversial workplace laws.

Touring logistics and freight company Toll’s Brisbane facility, Mr Albanese says the drag on wages – which would be exacerbated by the laws – is having a direct impact on the economy.

“The dampening down of wages has not only had a dire impact on people struggling to make ends meet … it’s had a devastating impact on our national economy,” he said.

“The Reserve Bank of Australia says so. They’re desperate to see wages increase, and yet for this government, they don’t have a plan for anything except further cuts in wages.”

Opposition industrial relations spokesman Tony Burke said the government would scrap the better off overall test for workplace agreements and the changes would result in a $14,000 a year pay cut for part-time disability care workers.

“This is legislation that says your ordinary hourly rate, that can stay the same, but every penalty rate, every shift allowance, every loading, overtime rate, up for grabs,” he said.

Labor also took aim at the government’s handling of national security after the Solomon Islands inked a security deal with China.

The prime minister says Australia is well aware of the risks posed in the Indo-Pacific and the situation would have been much worse without the actions taken by the government to date.

“What we have seen now highlights those risks – you cannot always prevent them in all circumstances,” Mr Morrison told Adelaide radio station 5AA.

“The sort of pressure and influence seeking to be exerted in our region is very real.”

Mr Morrison says the government continues to focus on national security as he announced $50 million in funding for the University of Adelaide to create 1000 new jobs and develop 100 new defence products over the next four years.

Meanwhile, the West Australian reports Labor will officially launch its election campaign in Perth on May 1.

It will be the first time a federal campaign has been launched in WA by any party.

‘Australia votes for climate action’: How the world framed Labor’s victory as a win for the planet
Most Australians worry over climate change
Today's Stories