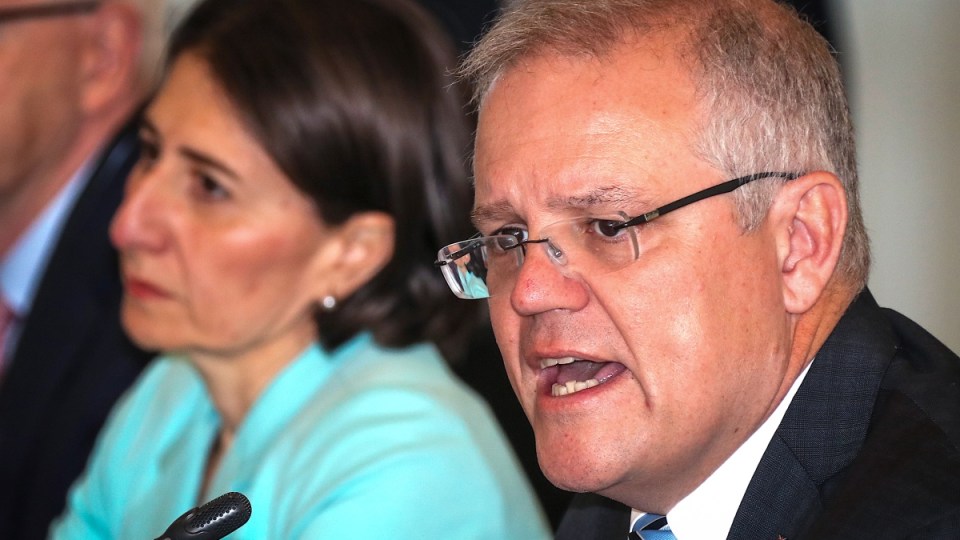 Labor has seized on disarray within the Liberal Party after government members questioned Prime Minister Scott Morrison’s account of why federal intervention was needed in New South Wales.

Opposition Leader Anthony Albanese said Mr Morrison made statements that were “demonstrably not true” after he defended going over the top of the party’s NSW executive to install his own candidates.

“That is why so many people in the Prime Minister’s own inner circle – people who know him well – have all come to a common view that he cannot be trusted,” he said.

“I’m just so, so disappointed. Lives are at stake today and he is just obsessed with petty political point-scoring. So disappointed and gutted,” the then premier apparently wrote.

It is the second text message in which Ms Berejiklian has allegedly attacked Mr Morrison. In the first – revealed by Ten Network political editor Peter van Onselen on February – Ms Berejiklian reportedly described Mr Morrison as “a horrible, horrible person” who she did not trust.

The cabinet minister described Mr Morrison as a “fraud” and “a complete psycho”. That person has never been named, although van Onselen has said it is a current member of federal cabinet.

On the ABC’s 7.30 on Tuesday night, Mr Morrison said Ms Berejiklian had denied sending the texts. In fact, she has said only that she cannot remember sending them.

“I should have said, she didn’t recollect them, she didn’t know them,” Mr Morrison said on Wednesday.

“All I know is that I haven’t seen them. And that is not her view about the way we work together. I think she has been very clear about that.”

Mr Albanese said the latest exchange was “just one of the reasons why we need to change the government and have a more honest and transparent government”.

“It is also the case on a range of other things that this Prime Minister just says whatever he finds convenient for the time, regardless of whether it is the truth or not,” he said.

“We’ve got the evidence here,” he said.

“Here’s the actual text message, and it says: ‘Morrison is a horrible, horrible person. He is actively spreading lies and briefing against me re fires’.”

Mr Clare said internal divisions were tearing apart the Liberal Party, and it was unfit to lead.

“If you have Liberal Party MPs saying they can’t trust Scott Morrison, why should the Australian people?” he said.

“If you have members of the Liberal Party saying they’re not going to vote for Scott Morrison, then why should the Australian people?”

Mr Perrottet welcomed Tuesday’s decision of the NSW Supreme Court that it could not rule on the dispute, but said it left little time to campaign.

The ruling means the 12 NSW candidates chosen by the Premier, Mr Morrison and the former president of the federal Liberal party, Chris McDiven, will be allowed to stand. They include Environment Minister Sussan Ley, Mr Morrison’s ally Immigration Minister Alex Hawke and backbencher Trent Zimmerman.

“It’s an abject failure of the division to not be in a position whereby there are candidates that members of the public here in NSW can vote for if they want to support a Liberal candidate at the next election.

“The election is going to get called any day now and we only [now] have candidates in many seats being endorsed.

“There’s not much of a lead-up time.”

Mr Frydenberg admitted the factional fighting had been ugly.

“It has been less than ideal, but I’m glad that it’s heading to its conclusion and that we’ve secured new candidates for these seats,” he told the ABC.

“But I don’t want you just to focus on the Liberal Party. The Labor Party was in a High Court just a week ago having their own federal Labor takeover of the Victorian division challenged.”

On 7.30 on Tuesday, Mr Morrison defended his actions in going over the top of the NSW executive to install his own candidates as intended to protect female MPs whose preselections were at risk.

“The prime minister was standing up to things happening in the party to make sure that quality people, who are doing a quality job in their seats, should be able to go forward to the next election.”

Liberal senator Concetta Fierravanti-Wells, who has been relegated to an unwinnable spot on the party’s NSW Senate line-up, has rejected Mr Morrison’s assertion.

“Morrison is simply using the ‘gender card’ to conflate captain’s picks to trash democratic processes in NSW,” she said in a statement to 7.30.

“I do not accept criticism from a person who lacks a moral compass.”

Senator Fierravanti-Wells last week spoke under parliamentary privilege to condemn Mr Morrison as “not fit to be Prime Minister” and branding him “ruthless”.

There was some public support for Mr Morrison on Wednesday. NSW cabinet minister David Elliott lashed the “armchair generals who couldn’t make the grade” who have criticised him.

“These co-ordinated attacks from his detractors on both sides of politics are motivated by jealousy and ignorance,” Mr Elliott told News.

Mr Morrison must call the federal election within days. On Wednesday, he said that would not be Thursday.

“It will be called soon enough and it’s going to be a very important election,” was all he said when asked about the election date.