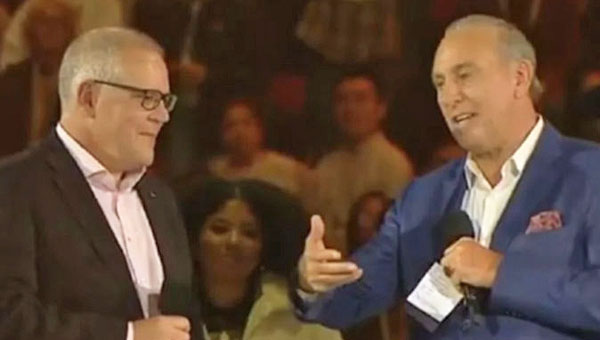 Prime Minister Scott Morrison has distanced himself from Hillsong Church founder Brian Houston, saying he was “disappointed and shocked” at the pastor’s resignation amid allegations of inappropriate behaviour towards two women.

Mr Houston resigned from the church, on Wednesday, less than a week after it revealed and apologised for his alleged behaviour.

“I must admit we were very disappointed and shocked to hear the news,” Mr Morrison said in Melbourne on Thursday.

“My first thoughts were with the victims, as they’ve been rightly described, and so very concerned and the actions that have been taken are entirely appropriate.”

Mr Morrison, who is a Pentecostal Christian but attends another church, said he had not been to Hillsong for about 15 years.

However, he and wife Jenny joined Mr Houston on stage at a Hillsong conference in Sydney in 2019, shortly after the last federal election. It is the same conference at which one of the incidents that led to Mr Houston’s resignation is alleged to have occurred.

Mr Morrison has had a long association with Mr Houston, including describing the pastor as a mentor. In his first speech to Parliament in 2008, Mr Morrison said he had been “greatly assisted by the pastoral work of many dedicated church leaders”, with the Hillsong founder among them.

In 2019, it was reported that Mr Morrison sought an invitation for Mr Houston to attend a state dinner at the White House. The White House knocked back the bid.

Mr Morrison initially refused to comment on the issue, before admitting in early 2020 that his office had “put forward a number of names that included Brian”.

“I’ve known Brian for a long time and Hillsong church has a very big network of churches all across the US, and the ministry, when it comes to the music and so many other things have been very big – it’s probably the single largest church organisation that is known in the US,” he said at the time.

As well as the mistreatment allegations, Mr Houston is due back in a NSW court in December for a three-week hearing over allegations he hid his father’s child sexual abuse.

Brian Houston and his wife Bobbie founded Hillsong in 1983 in Sydney’s western suburbs. It now has churches in 30 countries and an average global attendance of 150,000 weekly, according to its website.

His resignation follows an apology issued by the church on Friday over allegations of his alleged conduct towards two women.

About 10 years ago, Mr Houston allegedly sent inappropriate text messages to a staff member, while under the influence of sleeping tablets that he had become dependent on, and ended with the employee resigning, according to the board.

The second incident was received by the church and related to the 2019 Hillsong conference that was also attended by the Morrisons.

According to the board, Mr Houston became disoriented after the conference and after consuming too much anti-anxiety medication mixed with alcohol. He then knocked on a hotel room door of a woman who had attended the conference, spending 40 minutes in her room.

An investigation launched by the global board found Mr Houston had breached the Hillsong pastors’ code of conduct.

“This person did not deserve to be placed in the situation she found herself in,” the board said on Friday.

The woman was refunded money she had donated to the church.

Following that investigation, Mr Houston stepped down from Hillsong leadership. But according to the board he did not do all the agreed upon steps – which have not been detailed by the church – and he remained suspended, until Wednesday’s resignation.