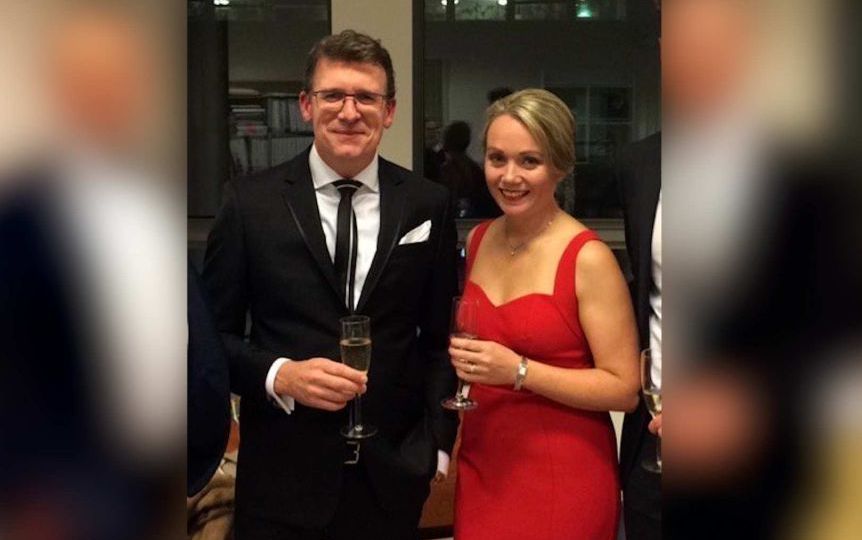 Alan Tudge and then-staffer Rachelle Miller, with whom he an extramarital affair. Photo: ABC

Mr Morrison said Mr Tudge had been found not to have breached ministerial standards, in an inquiry that followed an allegation by former staffer Rachelle Miller last year of emotional and, on one occasion, physical abuse while the pair had an affair.

However, Mr Tudge had “informed me that in the interests of his family, and his own wellbeing, and in order to focus on his re-election as the member of Aston, he is not seeking a return to the frontbench, and I support his decision,” Mr Morrison said in a statement late on Friday afternoon.

He said the Department of Prime Minister and Cabinet had provided him with advice on Friday, following the report by former intelligence specialist Dr Vivienne Thom into Ms Miller’s allegations. Mr Morrison received that report on January 28.

Mr Tudge had strenuously denied the allegations. He was stood aside as minister and went on leave in December while the investigation was conducted.

Ms Miller refused to participate in the inquiry on the grounds its terms of reference and timeframe guaranteed a narrative that suited the government’s agenda.

Dr Thom’s investigation found that Mr Tudge had sought to promote Ms Miller from media adviser to senior adviser while they were in an undisclosed relationship, in breach of the ministerial code of conduct.

Two weeks ago, Ten News reported that Mr Tudge was about to sacked from the frontbench, with the reported promotion as justification. There were also reports at the time that Mr Tudge’s name-plate had been removed from his parliamentary office.

At the time, Mr Morrison denied the claims.

“The matters relating to the minister for education I have been taken extremely seriously,” he told parliament.

“The matter is in process and has not concluded and in fairness to all involved in this matter, it would not be appropriate to make further comment at this time.”

He said Dr Thom’s report would be made public, with minor redactions to de-identify individuals.