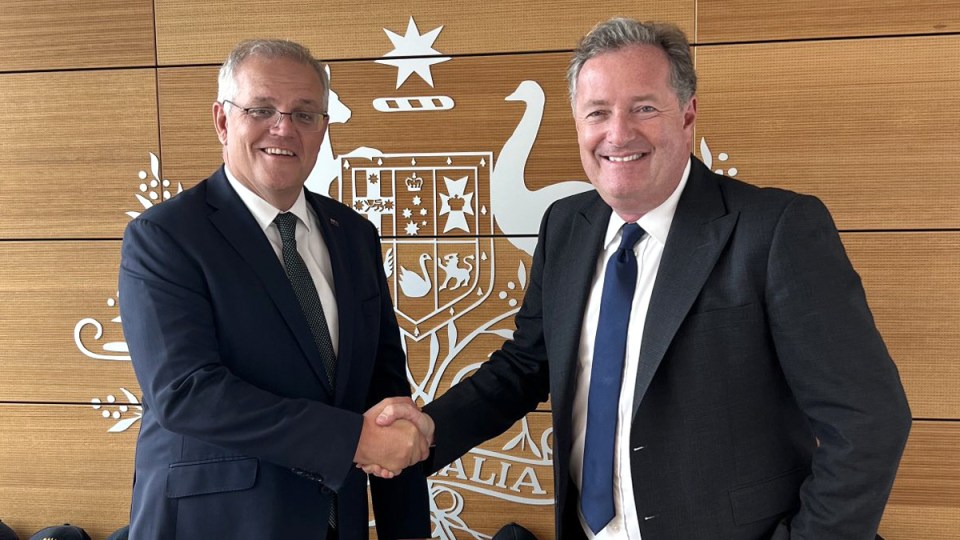 Mr Morrison and Morgan, in a photo tweeted by the controversial broadcaster on Monday morning. Photo: Twitter

Prime Minister Scott Morrison has been roasted online after British broadcaster Piers Morgan tweeted a picture on Monday of the pair meeting.

The image – which came amid the deadly flood crisis in NSW and Queensland and as Russia’s invasion of Ukraine entered its fourth day – sparked criticism of how Mr Morrison found time to meet the controversial TV figure.

“Had a fascinating 45-min chat about Ukraine, China, cancel culture (not a fan), ⁦BorisJohnson⁩ (big fan), cricket (the Ashes) and my new global TV show. Thanks for your time, PM.”

The happy snap sparked an immediate barrage of criticism online. That prompted a hasty clarification from Morgan that the photo – despite being posted on Monday morning – was actually taken last week.

“Here’s me with Labor leader & wannabe PM ⁦Anthony Albanese the night before. Both meetings occurred before Ukraine invasion & Queensland floods… so cool your indignant jets, Oz media,” he followed up later on Monday.

It is unclear what the meetings with the Labor leader and the PM were for. But Morgan is in Australia as the host of a new show for Sky News Australia.

It will air nightly in the US, Britain and Australia, with the broadcaster saying he wants it to be “a platform for free speech and democratic debate and the right for people to come on and have their own opinion without being shamed and cancelled”.

Morgan famously quit his last job in a dramatic on-set walk-off after being challenged over comments about Meghan Markle.

It came after Meghan and husband Prince Harry’s bombshell interview with Oprah Winfrey a year ago, in which they revealed she felt suicidal while pregnant with son Archie and was denied help by the royal family. They also made shocking claims of racism in the British royals.

“I’m sorry, I don’t believe a word she says,” Morgan said on air.

Co-presenter Susanna Reid noted that Meghan had said she’d been driven to the verge of taking her own life and described Morgan’s response as a “pathetic reaction”.

“She says that, yes,” Morgan replied.

But things got more heated when weatherman Alex Beresford added his criticism to Morgan’s comments.

“I understand that you don’t like Meghan Markle, you’ve made it so clear a number of times on this program,” Beresford said.

“Has she said anything about you since she cut you off? I don’t think she has, but yet you continue to trash her.”

Mr Morgan then walked off saying “OK, I’m done with this”. He announced his resignation from GMB shortly after.

The comments sparked more than 40,000 complaints from viewers to Britain’s broadcast watchdog, Ofcom. The duchess – who was reportedly concerned his remarks might prevent others seeking help for mental health issues – was among those who complained.

Last September, Morgan was cleared over the remarks.